Death can mean pain and sadness, but for the Hispanic culture, the Day of the Dead is an event of celebration and family enjoyment.

There is no doubt that death has been interpreted according to the history of each culture, and for that reason one can find different ways to celebrate the eras and the views of the various peoples.

In particular, on the Day of the Dead one can find a syncretism between the religious and pagan, in addition to a clear concern for maintaining  the existing legacy of those who have died.

In this way, during the Day of the Dead, death becomes life through a popular cult that combines prayers, performances, altars and fun. 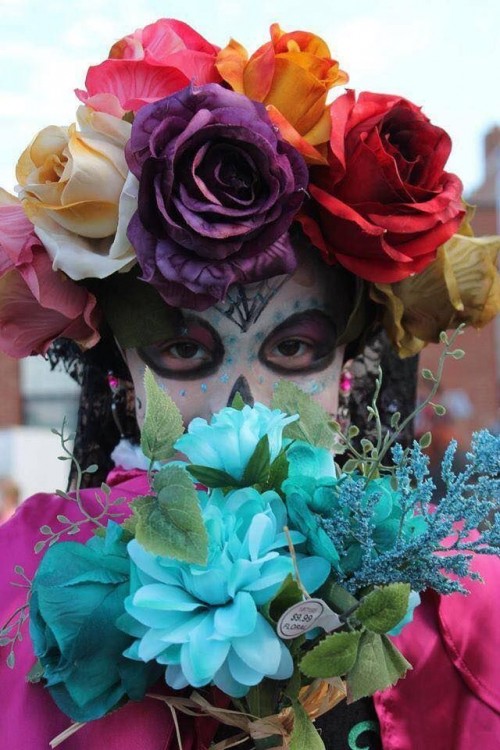 According to the Catholic calendar, the Day of the Dead is traditionally celebrated on Nov. 2, corresponding to the Day of All Souls. The provision of commemorating it on that date was an initial attempt to eradicate the pre-Hispanic festivity, considered as sacrilegious and pagan at the time of the Spanish conquest. However, the tradition refused to die and gradually incorporated elements of European cultures. “It is an extraordinary day, because we remember our dead with a feeling of peace and spiritual joy, knowing that they achieved glory,” said Fr. David Medina of Our Lady of Guadalupe Parish in Tulsa, Oklahoma. “This custom, originating with the Aztecs, is a very important tradition, where we celebrate the passage from death to life, because after this life, a better one awaits us.”

Medina explained that it was previously thought that all souls were allowed once a year to visit their loved ones here on Earth. “They built altars, they placed their favorite food of the departed, their special drink. It was a great party.” He added that “as Christians we know that souls cannot come back again, as they are in special place waiting for the resurrection, that is, the Last Judgment, where the Lord calls them to enjoy the heavenly homeland. We continue the tradition because Christian meaning is important. That is why we gather as a family; we build an altar, remembering the lives of our loved ones, their love, their devotion. We even tell anecdotes.”

The altars are the key elements of the tradition. They represent the cultural mix or the “Catholic introducing itself to the Aztec world,” as Medina describes it. In this way symbolic elements that do not belong to the Mesoamerican cultures were added, such as rosaries, crucifixes and sacred icons.

Medina said that the creation of the altars fluctuates according to the idiosyncrasy and items available within a given region, as well as the particularities of different cultures. “Every altar must exhibit four fundamental components: air, fire, earth and water.”

Air is symbolized by the “papel picado” or colored tissue paper cut into shapes. Medina said the pre-Hispanic Aztecs used a rough tree bark of trees, which was covered with color, primarily yellow and purple.

Fire is represented by candles. “This item adds an air of majesty to the altar, but also functions as guide for the souls that return.” That is why torches or candles arranged in the shape of a cross are part of the altars.

Earth is represented by seeds and fruits. Medina recalls the saying: “Dust thou art, and unto dust thou shall return,” from the book of Genesis in the Holy Scriptures.

Water, meant to ease the fatigue of the souls after their journey is represented by the deceased’s favorite drinks.

“With all the elements used to create an altar, we celebrate the memory of those who have gone ahead of us and now rest eternally,” said Medina. “It is not about making fun of death, but about getting together with the family and friends to remember the work and talents of the deceased . We use the moment to pray for his eternal.”

Many of the items that decorated  the altars retain a pre-Hispanic flavor, where it was common to use skulls as fundamental bases for the rituals. “That is why on the altars we see sugar skulls and traditional images of Catrina – a skeletal lady,” said Medina. “But the really important thing is to honor and pray for those who have been called to the kingdom of heaven.” 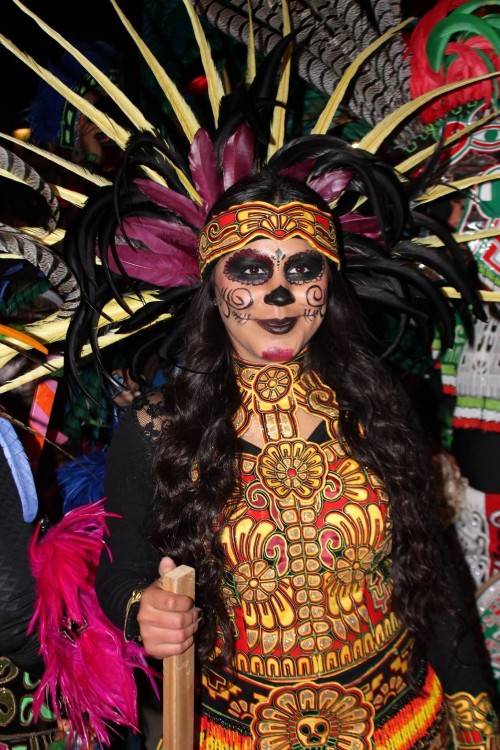 Sara Martínez, author and librarian, said the Day of the Dead is the “perfect multilcultural amalgam.” She said that in “very few traditions can we see such a warm reception within the host culture as in this case. It is so because death is something transcultural; it is fascinating for any culture.”

Martínez noted the importance of the Day of the Dead to the cultural heritage of future generations. “This celebration is critical, very important and much more so when we are exposed to other trends,” she said, adding that “of course, we must understand that the purity of this celebration is found only in books, and the outside of Latin American borders, there are adaptions and changes. This is normal; it is a natural process. It was for the Aztecs and it must be for us and those to follow.”

Steve Liggett, artist and former artistic director of Living Arts of Tulsa, was captivated with the Day of the Dead during a trip to Oaxaca, Mexico. He defines it as a “cultural explosion,” so much that since 1993, he has been organizing an arts festival in honor of that event, observing it on Nov. 1 rather than Nov. 2.

“One of the best forms of contemporary art is a form called installation art,” said Liggett. “The Day of the Dead Arts Festival is a wonderful presentation of this artistic expression.” 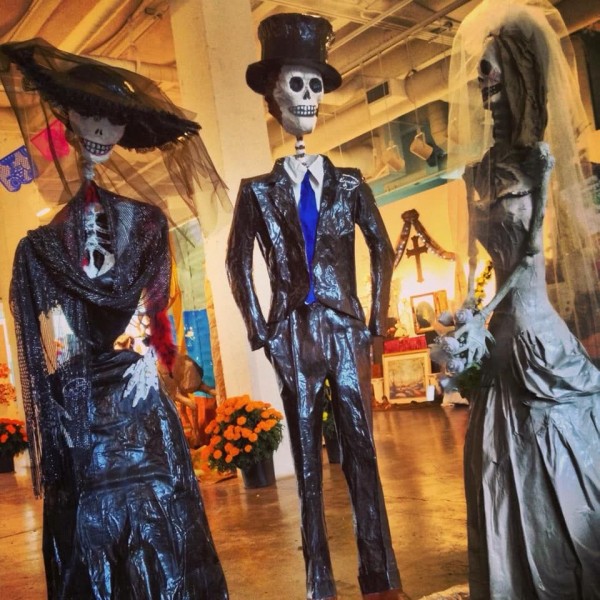 Although some people unfamiliar with the tradition of the Day of the Dead might consider it a Hispanic version of Halloween, Liggett emphatically said it is not. “No. This tradition is rich in art, culture and goes far and beyond a simple celebration. It is a way to honor our loved ones.” He said the Day of the Dead “gives us a great opportunity to remember our family and friends.”

For Liggett, one of the greatest benefits of the observance is that one can celebrate it “anywhere in the world.” He said “arts do not know about borders or languages; they are beautiful, they are mine, yours, and everybody’s. The Day of the Dead is part of the contemporary art; therefore it is universal.” 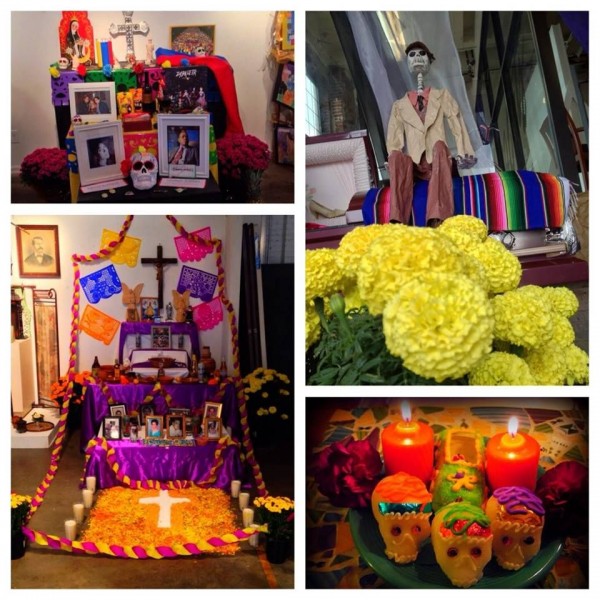 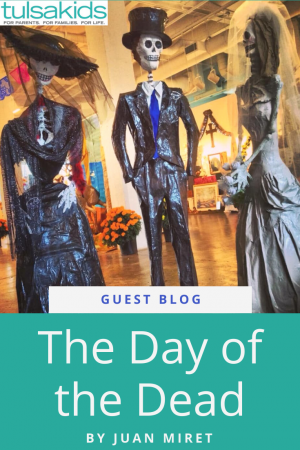