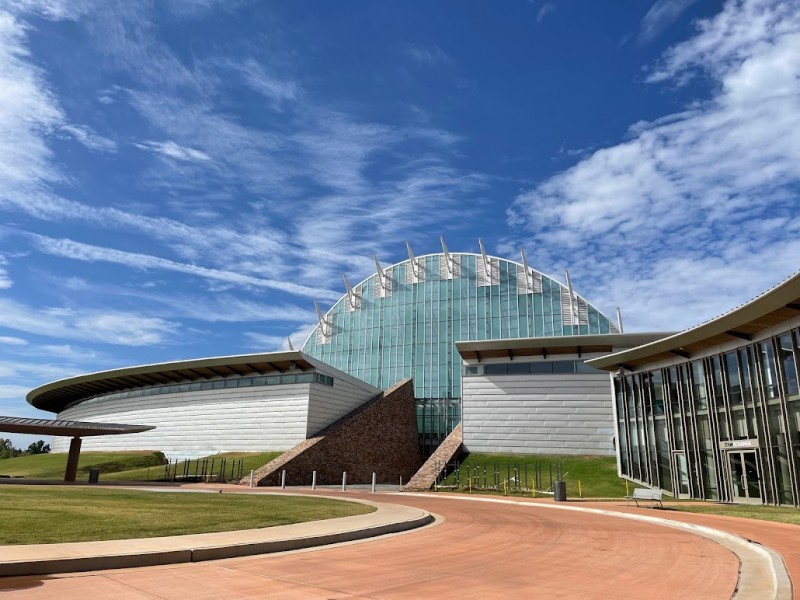 When I heard of the opening of the First Americans Museum (FAM) in Oklahoma City this year, I knew our family had to go. This was important to us because we wanted to see this incredible space dedicated to honoring and representing the 39 nations that reside in Oklahoma. It was also a way to talk about our own native ancestry.

The “FAM,” as it is affectionately called, is an easy drive from Tulsa on I44. As you come upon the space, two buildings shaped like two partial circles that intersect greet you. The grounds function as a cosmological clock, tracking the seasons by showing the movement of the sun and highlighting the equinoxes. It’s a beautiful and captivating effect, reminiscent of ancient mounded ceremonial grounds I saw while traveling in South America.

As you walk under two silver arches supporting a large hand, a sculpture done by the Cherokee father and son artists Bill and Demos Glass, you feel the sense of entering a sacred space. The entrance of the museum is facing east, the traditional way indigenous homes are made to greet the morning sun.

Inside, the FAM has three main exhibit galleries, two theaters and two restaurants focusing on native foods. The indoor spaces focus on the history and present-day experience of the 39 nations that were either forcibly removed to Oklahoma or are indigenous to this place.

We started in the south gallery. The gallery runs in a serpentine fashion and explores the history and present-day experience of native culture. There is a lot of text in this gallery. However, there are also many interactive elements that kept my six and eleven year old children engaged. We entered a circular theater that showed an immersive animated video exploring three different tribal creations stories. At different points in the video you were surrounded by rushing water and the sounds of rock being pulled by the small legs of a crayfish. It felt like you were a part of the story. 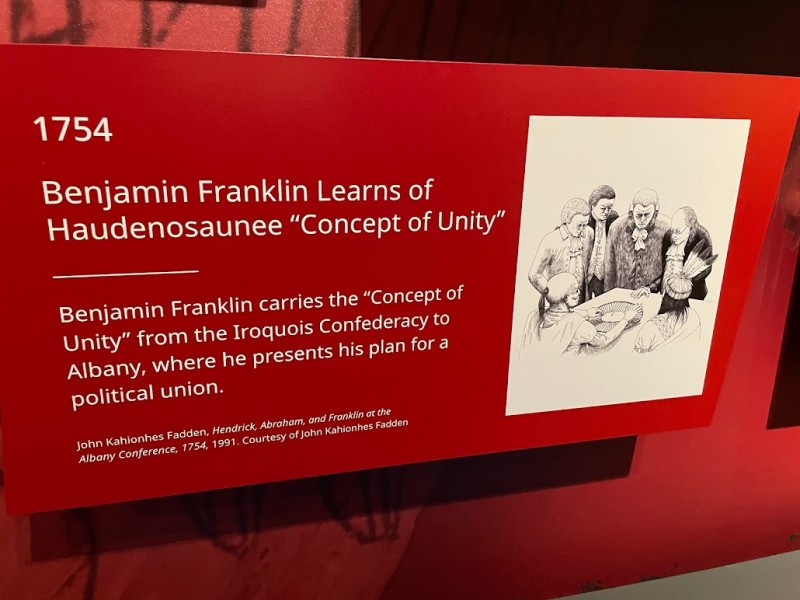 We were then taken on a path of parallel timelines, one on each side of the gallery. The European timeline of Native history was one long, straight line cutting along the wall. The indigenous timeline was circular and did not end. We liked getting the chance to meander around the indigenous way of experiencing time. It put us in a slower, more wandering way of enjoying the museum.

One of our favorite spots was these wooden alcoves built into the gallery. You entered the round, semi-enclosed room and sat on a bench surrounding a red, glowing fire. As you sat, an audio recording of indigenous stories was playing over a speaker. Having the experience of campfire stories while in a museum felt cozy. It was a great way to experience it in an auditory manner. 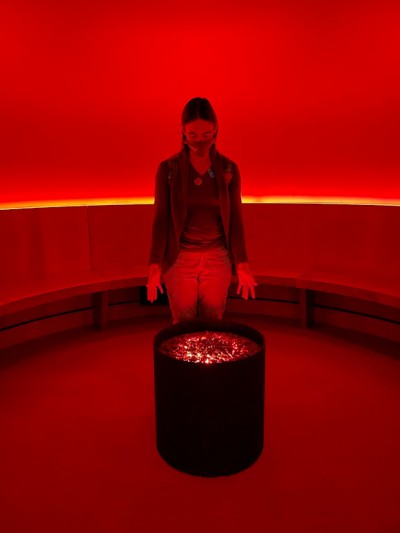 They also had a video sharing stories about the battles and relocation of native people to Oklahoma and the boarding school experience. The videos were personal retellings of people who survived the boarding schools and whose ancestors survived some of the battles. They were brutally honest and very moving to watch. The video imagery was not gratuitously violent, mostly illustrated in drawings, but was definitely heavy content for young children. The theater had a warning about this before you went in.

As you moved along, the gallery went from historical storytelling to modern-day native culture in Oklahoma. This included a large section on Mis-Representation, showing the way native peoples have been stereotyped in popular culture. There was also a section where you could sit on a couch and watch satirical videos done by native people poking fun at these stereotypes. This was a little over my children’s heads, but we adults enjoyed it. 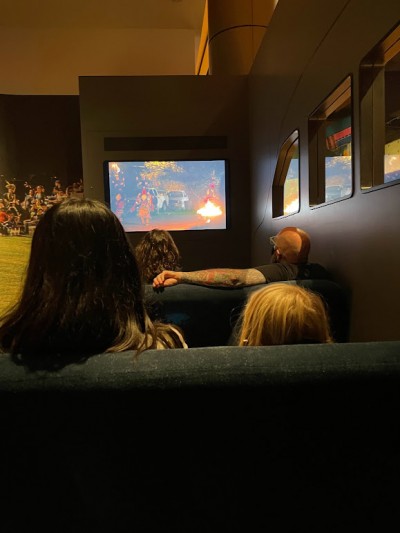 There were also two interactive elements where you could get into a “van” and ride along the powwow circuit through Oklahoma. The kids especially liked this part. There was also an interactive video where you can play a game where you hide sticks made by the Anadarko Aunties. This was right next to a large section on famous Native American athletes and the contemporary sport of stickball. This part of the exhibit highlighted indigenous excellence grounded in modern-day culture. It was something I haven’t seen any museum do well until now. 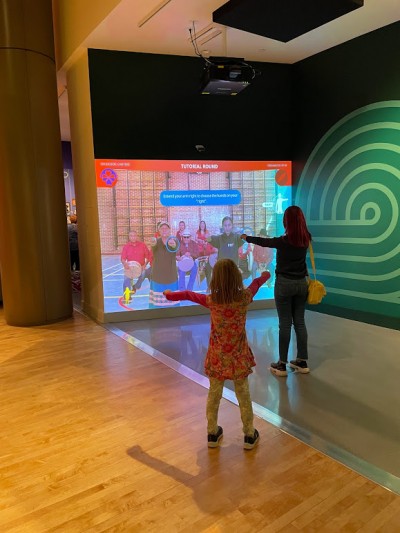 WINIKO: Life of an Object

As we exited this gallery there was a staircase leading upstairs to an exhibit called “WINIKO: Life of an Object.” These were all artifacts and ceremonial pieces on loan from the Smithsonian museum that belong to native people that live in Oklahoma.

The exhibit talked about the concept of decolonization, the undoing of colonialism, and the importance of museums giving back the items taken from indigenous people. In a moving video, a hat worn by a young Modoc girl on the Trail of Tears is reunited with her descendants. 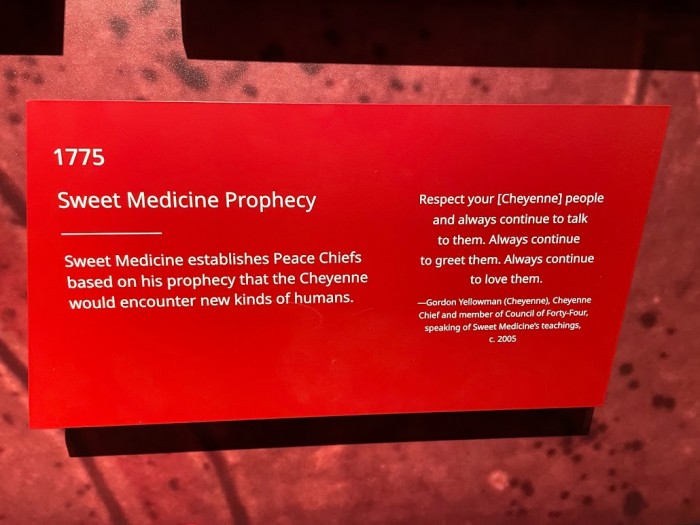 As we headed down the west hallway, we saw signs for a children’s interactive exhibit that will be coming soon. We also saw a theater that had animated video elements focused on young visitors. It was next to the yummy looking “Thirty Nine” restaurant that focuses on modern indigenous cuisine.

After we left, my children and I had some great discussions on the ride home about the rich cultural traditions we saw at the museum and our own ancestral heritage.

We are excited to watch this important museum grow and to come back for one of the many events they will be hosting throughout the year. 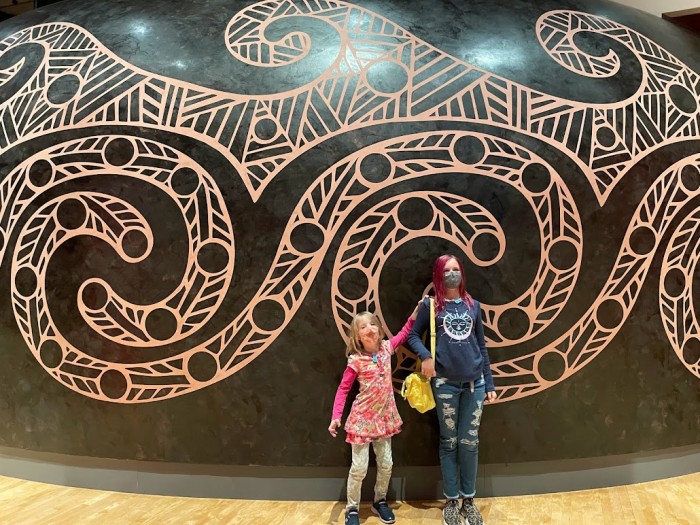 As of October 2021, First Americans Museum hours are:

Children 3 and under get in free, while gallery admission for children 4-12 is just $5. Student (ages 13+), military, tribal and senior admission is $10. All other adult admission is $15. You do not need a ticket to visit the gift shop or restaurants.

Margaritte Arthrell-Knezek is a naturalist, writer and community educator. She is committed to teaching the skills of sustainability and instructing children and adults on how to connect with the natural world that surrounds them daily.

Margarittte graduated from The Evergreen State College In Olympia WA, 2010, with a bachelor’s degree in multi-media art and sustainability studies. She has traveled the world and landed in Tulsa, OK. Here, she is the Executive Director and Lead Educator of Under The Canopy. Margaritte is a parent to two awesome children and wife to Mykey Arthrell-Knezek.

Learn more about the programs she teaches at www.underthecanopy.org. 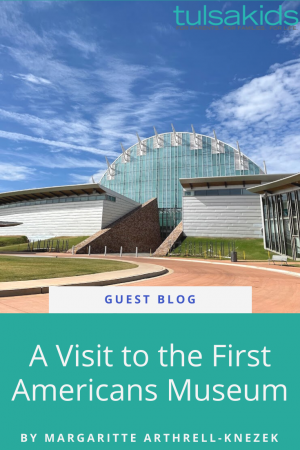