When a Hispanic child begins to lose his or her baby teeth, ‘El Ratón Pérez,’ yes,  a mouse steps in.

His job is similar to that of the Tooth Fairy: He will replace a tiny tooth, which has been placed under a pillow, with a gift. Frequently, the gift is money.

The Latin rodent is not the Hispanic version of the Tooth Fairy. But it would be fantastic to have señor Pérez with a pair of golden wings and a magic wand. This sort of cultural melding is addressed by René Colato Lainez in his book in English, “The Tooth Fairy meets El Ratón Pérez,” which is about this character from childhood.

The intellectual paternity of Ratón Pérez has been conferred to Luis Coloma Roldán, a Spanish priest, writer and journalist, who in the late nineteenth century wrote a story for King Alfonso XIII – when Alfonso was just 8 years old.

The book begins: “The boy king Buby I placed his tooth I under the pillow, as is customary, and waited impatiently for the arrival of the little mouse. He had fallen asleep when a light touch woke him.”

However, some literary experts have suggested that the image of the mouse appeared before the story by Coloma Roldán in 1877, in the book “Stories, prayers, riddles and popular sayings” by Cecilia Francisca Bohl de Faber, whose pseudonym was Fernán Caballero. In the work, Pérez the mouse was married to a little rat named Presumida (“Conceited”).

The character was portrayed in a movie in 2006 directed by Juan Pablo Buscarini and titled “Pérez, the Little Mouse of Your Dreams.” The film, with 3-D animation techniques, portrayed the children’s character in a melodrama with other rodents who are rivals and kidnap Pérez to keep him from his job of collecting teeth.

Today, Hispanic children wait for Ratón Pérez, who, according to the legend, arrives wearing a straw hat, sunglasses and gold shoes and with a red knapsack on his back, and then replaces teeth with gifts.

The original manuscript of Luís Coloma Roldán lies in the vault of the library of the Royal Palace in Madrid, Spain.

The Madrid City Council paid tribute to the rodent, installing a commemorative plaque at 8 Arenal Street in Madrid, the location that Coloma Roldán used as the mouse’s home, and including the following text: “Ratón Pérez lived here in a cookie box, according to the story that father Coloma wrote for the child King Alfonso XIII.” 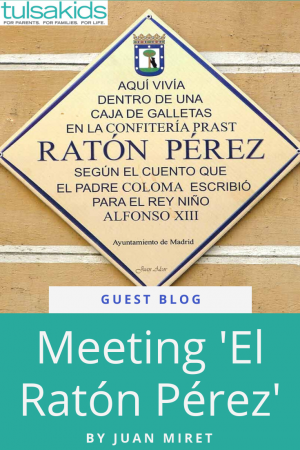