Children’s and YA Books About the U.S. Government

Read these titles leading up to the 2021 Inauguration, or year-round

When my husband and I first met, we were teaching middle school together at Edison Preparatory in Tulsa. I taught 7th grade English, and Matt taught American History. Being so, it is little wonder that we have an affinity for children’s and Young Adult books about the U.S. government and its major players. We carry many titles on these topics at Eleanor’s Bookshop throughout the year – not just during presidential election years. If you’re looking for a way to start a discussion with a kiddo or a young adult with the impending Inauguration, these titles would be a great place to start.

One of my favorite qualities of children’s literature is the way in which it is able to discuss incredibly challenging topics in an approachable and comprehensible way. Now, more than ever, I realize that the topic of the American government in its current state is far more complicated than much literature would have the access to explain. However, I do believe the titles listed below serve as excellent touch points for discussing what is at the heart of the American experiment with the young people in your life, whether they be infants, young adults, or somewhere in between.

All of these books can be purchased at Eleanor’s Bookshop on the southwest corner of 11th and Lewis. If you’re unable to make it into the store, check out our online store at bookshop.org/shop/eleanorsbookshop, where we have these titles (and other recommendations!) organized in lists for your convenience.

Books about how the American government works 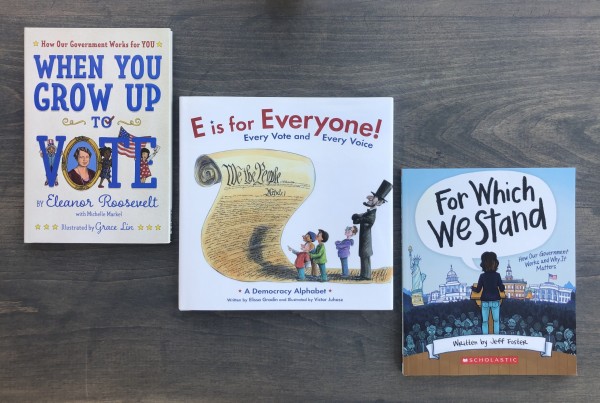 WHEN YOU GROW UP TO VOTE by Eleanor Roosevelt, illustrated by Grace Lin

Our shop aspires to pay tribute to its namesake, Eleanor Roosevelt. In the words of her granddaughter Nancy, Roosevelt “extended a sense of dignity to children,” recognizing and encouraging their involvement and participation in the American democratic system. The original edition of WHEN YOU GROW UP TO VOTE was published in 1932, the year in which Franklin Delano Roosevelt was inaugurated. Eleanor Roosevelt discusses topics ranging from firefighters to the U.S. Treasury, from local to federal government, with a special emphasis on the reader’s relationship to all of them as a future voter. This book – with short chapters, large vocabulary words, and labeled diagrams – is the perfect book for early readers to share with an adult.

E IS FOR EVERYONE: EVERY VOTE AND EVERY VOICE by Elissa Grodin, illustrated by Victor Juhasz

This picture book is organized as a “democracy alphabet” from A (amendment) to Z (zest, referring to the excitement the reader has for democracy after finishing this book!). While this book does not provide a comprehensive understanding of how all elements of the American government work together, it does serve as a primer for some more unique democratic terms, such as “judicial branch” and “mint”. The illustrations and couplets are rather charming and helpful in understanding the more challenging vocabulary, and they provide an excellent starting point for further discussion on these topics. This title would be recommended for children ages 4 to 8.

FOR WHICH WE STAND: HOW OUR GOVERNMENT WORKS AND WHY IT MATTERS by Jeff Foster

Jeff Foster, longtime AP government teacher at Marjory Stoneman Douglas High School, wrote this YA title. Filled with infographics, diagrams, photos, and illustrations, FOR WHICH WE STAND is engaging while connecting the many complicated pieces of American democracy. This book would be excellent for young adults that just voted in their first election or will vote in their first election soon! 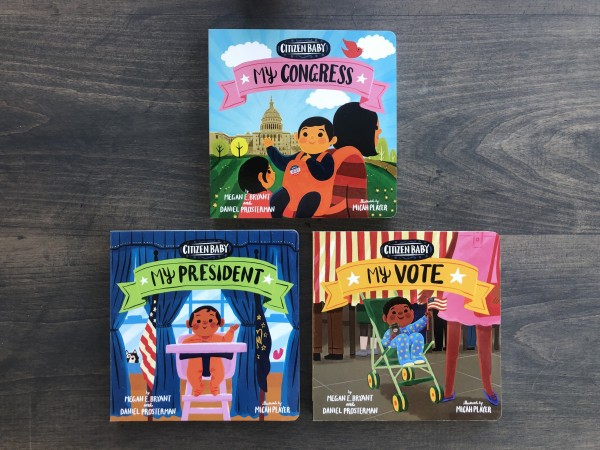 The CITIZEN BABY: MY VOTE title was one of our top sellers last autumn for one obvious reason, but it is important to note just how excellent all of the books in this series are. The brightly colored illustrations and board book binding of the CITIZEN BABY series show that it was designed for babies, but it is actually appropriate for older children too. The contents focus on relating the child’s world to the government, making it a great start for understanding. For example, in MY PRESIDENT, the text compares the president’s job to the job of a baby. While an adult reads the newspaper about a “tough decision” that the president has to make, Citizen Baby is also making a tough decision about which food to try next in his high chair! The racially diverse cast of characters in the illustrations also
means that children will see themselves reflected in the book as well as children who do not look just like them.

Books about our Constitution 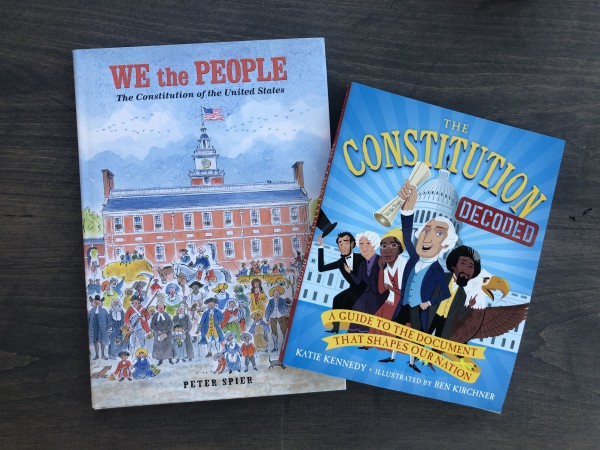 WE THE PEOPLE by Peter Spier

Peter Spier is a Caldecott Medal-winning illustrator, and this illustrated version of the Constitution exemplifies his talent for storytelling through art. The illustrations are absolutely stunning and tell American stories over history alongside the text of the Preamble. In the back of the book, Spier has included some historical context, as well as the text of the entire Constitution. The variety of information presented in this beautifully illustrated work makes it appropriate for children from ages 4 to 10, but I think an 8th or 10th grade student that is currently enrolled in an American history course would greatly appreciate this book as well.

THE CONSTITUTION DECODED by Katie Kennedy, illustrated by Ben Kirchner

This text would make an excellent study aid for a student of American history or as some exploratory reading for young history buffs. THE CONSTITUTION DECODED goes through the parent text, sentence-by-sentence, making the daunting and vocabulary-heavy document much more accessible. Featuring “Did you know?” sections and “Constitution in Action” callouts, this book chunks the Constitution into manageable parts while explaining its relevance and prevalence today. 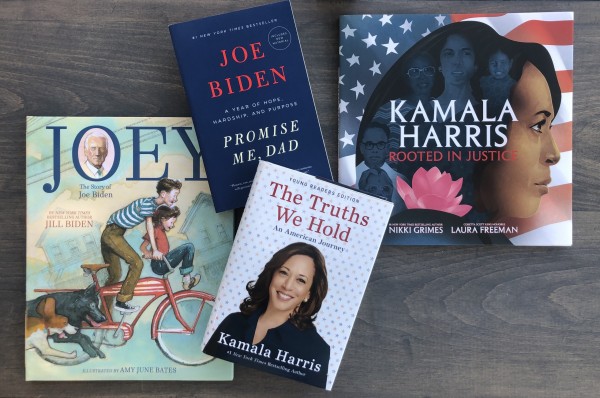 JOEY, which discusses the life story of President-Elect Biden, details his life from childhood to the announcement of his most recent presidential campaign. The story illustrates Biden’s commitment to public service while also providing some context for his interest in politics. Written by his wife, Dr. Jill Biden, this book also features some pictures of young Joey as well as a list of Bidenisms.

PROMISE ME, DAD by Joe Biden

Though this isn’t technically a Young Adult title, PROMISE ME, DAD could certainly be appreciated by teens (and adults) who are looking to learn more about Biden, his time as Vice President, and his “year of hope, hardship, and purpose.”

ROOTED IN JUSTICE by Nikki Grimes, illustrated by Laura Freeman

Following the life story of Kamala Harris, ROOTED IN JUSTICE does a fantastic job of illustrating Harris’s heritage, childhood, hardworking nature, dedication to excellence, and joy for public service. The words of the story sound as lovely as the illustrations look, making it a piece of art in every way. Though it is a picture book, this title would best be appreciated by older kiddos due to its length. And,
truly, this is a book that adults without kids could own as well.

THE TRUTHS WE HOLD by Kamala Harris

The edition of THE TRUTHS WE HOLD that we carry at Eleanor’s Bookshop is the Young Adult version of Harris’s memoir with the same title. For young adults who would like to know more about Kamala Harris, her upbringing, her history, and her beliefs, this title is a great place to start.

WHO IS KAMALA HARRIS? by Kirsten Anderson – Not pictured. Upcoming release!

From the popular WHO IS…? series, this new book about Kamala Harris includes her nomination and election as the first woman and the first African-American and South Asian-American person to be elected to the vice presidency. This title will be released on January 19, 2021. Eleanor’s Bookshop
will have this in stock. If you would like to reserve a copy, please email eleanorsbookshop@gmail.com or call 918-279-BOOK. 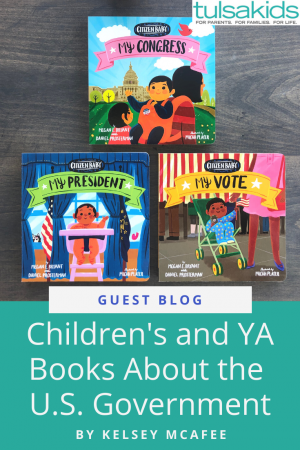