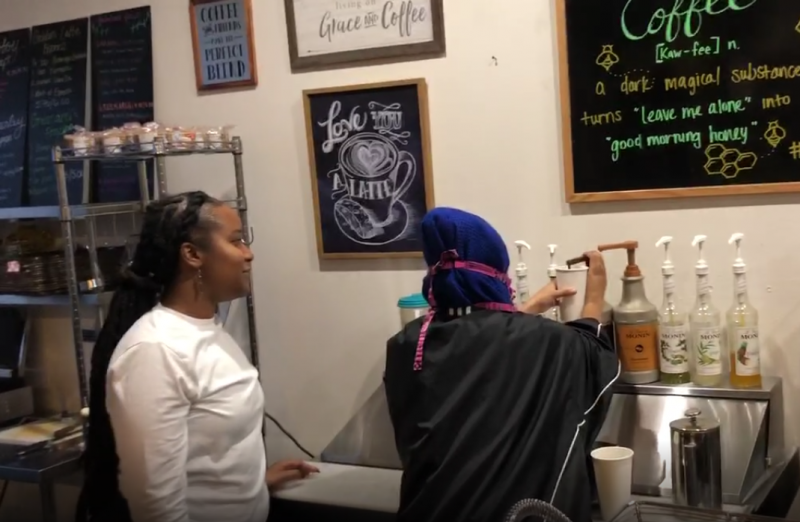 The Black Wall Street Liquid Lounge (10 N. Greenwood Ave., Suite 101 – 539.867.2477) is owned by Mr. Dwight Eaton, a Tulsa native. He is originally from Tulsa, Oklahoma, and so are his parents. His grandfather (Joe) owned Eaton’s Barber shop near Greenwood and Pine about half a mile from Black Wall Street. His grandfather was present during the 1921 race massacre in Greenwood. Upon Joe’s passing, Dwight’s father Bobby took over the barber shop, and it remains there today. There’s always been a connection there, and that is part of what inspired him to start his business on Black Wall Street.  Mr. Eaton started this business with the intent to bring together people and revive the impressive business legacy of Black Wall Street. His cafe “definitely pays homage to the Greenwood community.” The cafe even offers tours of the Greenwood community where they explain the history of Greenwood.

Greenwood was born when entrepreneur O.W. Gurley moved to Tulsa and bought forty acres, which he only sold to Black settlers. His family came from prominence out of Arkansas. Tulsa was experiencing a major oil boom at the turn of the century, which caused a lot of people to move to the Tulsa area. Glenpool was one of the biggest oil fields at the time, and a lot of people became wealthy, including Black people. However, because of segregation, they couldn’t participate the same way as white people.

Fifty different townships of Black people were established at that time in Oklahoma. Some of them still exist, such as Red Bird, Taft and Boley.  (Larry O’ Dell, okhistory.org)  In addition, one by-product of segregation was that Blacks could not participate in the larger white-owned economy, so they had to trade with each other. According to Mr. Eaton, the Black Dollar used to circulate 100 times in Greenwood before leaving the community. Greenwood attracted a lot of attention, including that of Booker T Washington, who named it “The Negro Wall street.” This is where the name Black Wall Street came from. 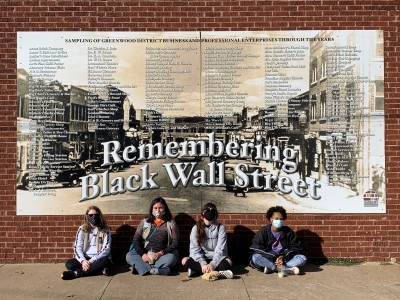 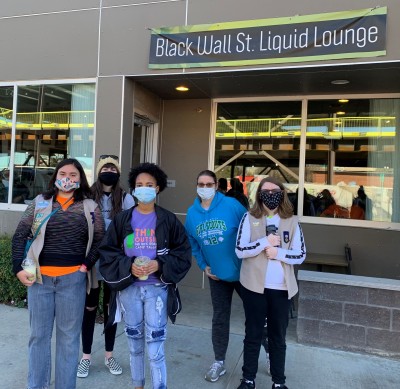 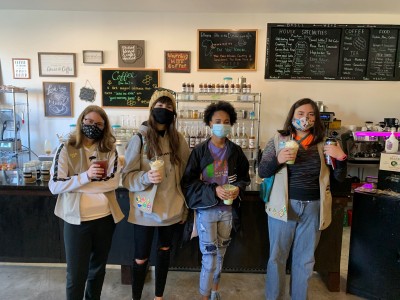 Before opening the Liquid Lounge, Dwight worked as a contractor in Houston, Texas, which he still does to this day. He also has a background in retail, which has helped him with his people skills. Along with that he has a background in the food industry. He worked for Pepsi Cola and KFC, managing at a high level. He also used to work at Starbucks, which gave him added experience for owning a coffee shop. Dwight was inspired to open a coffee business because it’s a social place and he can talk to customers. It brings people together and fits his profile and personality.

What is the connection to the Black Wall Street Liquid Lounge and ethnic food? As discussed above, it is a Black owned business in a historically Black part of Tulsa. In addition, coffee’s roots start in East Africa. The most highly sought after coffee is Coffea Arabica, which was first found in Ethiopia. It actually grew wild in the Ethiopian province of Kaffa.  It was first cultivated commercially in Yemen. (Fleisher, the History of Coffee, Scribblers Coffee). Even though it’s a prevalent trade on the East Coast of Africa, it isn’t commercialized as well as South American or the Asia Pacific.

Dwight believes what sets his coffee apart is the coffee beans he uses. Coffee beans pick up whatever micronutrients is in the soil that creates different taste profiles which is how you can have coffees differing in taste. This phenomenon is called terroir. The “best” beans are grown at a high altitude, and usually do well somewhere between 3000 and 6000 feet. Kenya and Ethiopia are known for using their high altitudes and fertile soil to produce great tasting coffee.

The names of the drinks at Black Wall Street Liquid Lounge pay homage not only to people important to the history of Greenwood but who are important to Black history in general.

A kid friendly recipe they keep on their menu is the Sweet Willie J, which is hot chocolate. Sweet Willie J was named after the first Black coach (William Jeffries) of a major state football team, the Wichita State Shockers.

Step 1: Warm the Milk by one of the following methods:

Step 2: Carefully pour the warmed milk into cup (using cooking mitts as it will be hot).

Step 3: Add in the chocolate sauce and caramel sauce and stir until thoroughly combined.

Step 4: Top with whipped cream and drizzle of caramel sauce.

One drink named after a famous Black Tulsan woman is the Lulu Williams. She owned the famous Dreamland Theater in Black Wall Street, and her drink is the Hibiscus tea, which makes you feel warm and dreamy.  (See if you can find where the Dreamland Theater was located by walking along Black Wall Street and reading the sidewalk plaques commemorating the historical business). 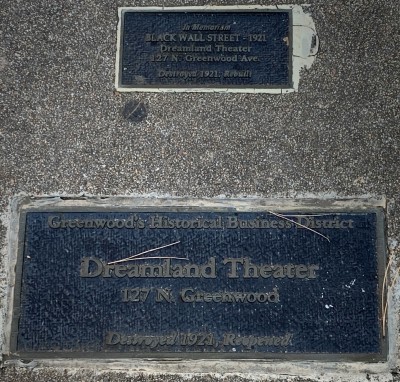 In addition to coffee and hot chocolate, BWSLL has other treats, like burritos, paninis, and croissants. There is a nice front room with comfortable chairs and couches, as well as beautiful paintings and photographs of historic Greenwood. 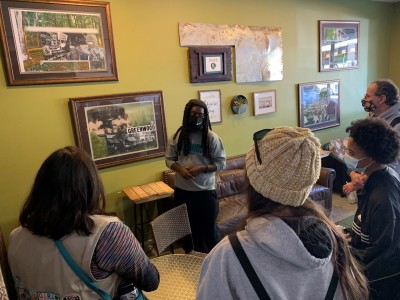 There is also a back room. It’s a nice area to hang out or work. The back room has framed headlines from the Oklahoma Eagle, which is the oldest standing building in Tulsa. The Oklahoma Eagle is the 10th oldest Black newspaper in the US still publishing today. 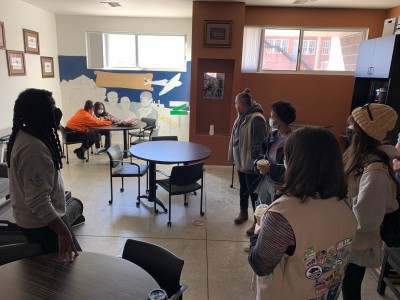 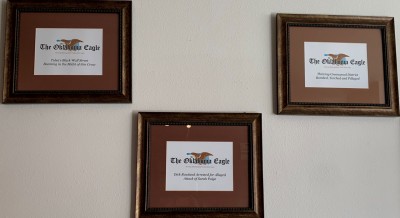 I wanted our troop to do a tour of BWSLL and Greenwood because I’ve always been interested in politics and Black history. This tour gave me an insight into both of those things in Tulsa. 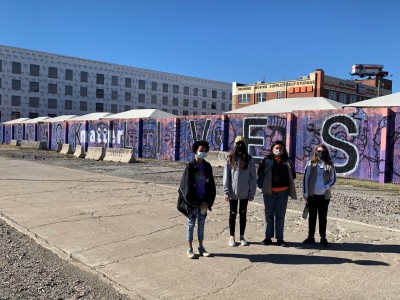 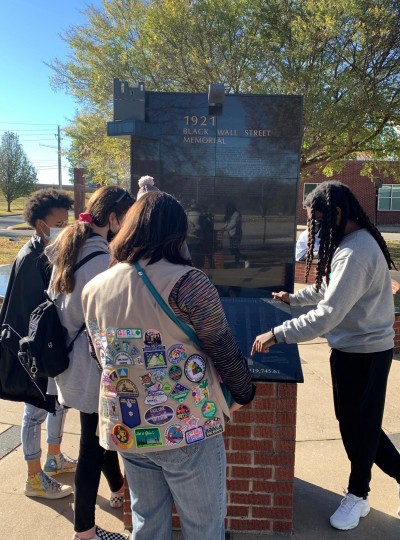 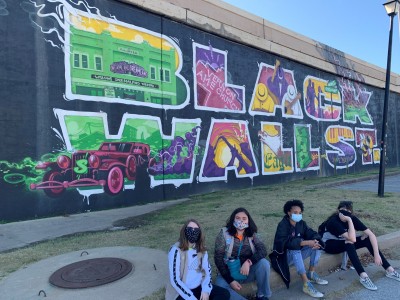 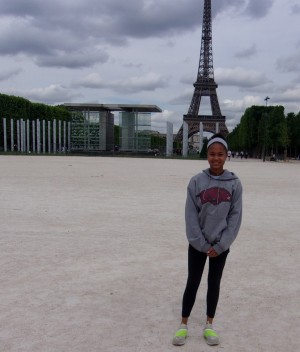 Hi, my name is Mariamu Ngaruiya. I am 15 years old and enjoy playing guitar, dancing, writing music, running track, and various other activities. I am a freshman in high school in Tulsa.  I joined Troop 1510 when I was 13, a year after moving to Tulsa. However, I have been a Girl Scout since the third grade. My mom started my Girl Scout troop in Little Rock because I couldn’t get in at my school. I’ve always loved learning about the culture, politics, and geography of different places around the world.  My family and I have lived in Kenya; Egypt; Boston, MA; Oxford, MS; Little Rock, AR; and Tulsa. My favorite place that I have ever lived was Kenya, where I was born in Nairobi. I am studying French at school and use Kiswahili to converse with my mom and dad.

Be sure to keep an eye out for our next travel adventure through Cajun country with our visit to Bayou Boyz BBQ! 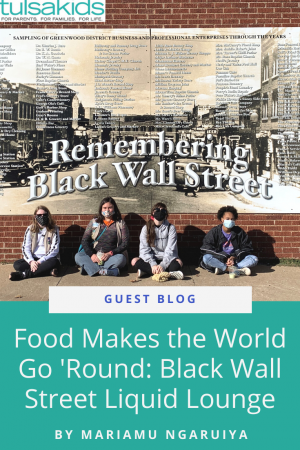