When you read the word PANDAS, you probably envisioned a cute, cuddly animal native to China. Unfortunately, there is nothing cute or cuddly about the acronym PANDAS, which stands for Pediatric Autoimmune Neuropsychiatric Disorders Associated with Streptococcal Infections. The PANDAS disorder was first identified in an article by Dr. Susan E. Swedo and her team at NIMH in 1998.

According to NIH, a child with PANDAS experiences emotional symptoms such as irritability, separation anxiety, ADHD symptoms, sleep disturbances, bed wetting, fine motor changes, joint pain, concentration difficulties, loss of academic abilities, and developmental regression. Swedo has been quoted as saying, “Some families have told us that their children seem possessed.”

PANDAS is considered an autoimmune or autoinflammatory disease in response to the strep infection. Streptococcus, the bacteria that causes strep throat, is also linked to other autoimmune diseases such as rheumatic fever and scarlet fever. In the case of PANDAS, the person’s immune system attacks brain cells, causing OCD, tics and other emotional symptoms. It is unknown why only some children develop this disorder. It is a rare condition with only 2,000 children diagnosed; although, it’s possible some children have it and are not properly identified.

The treatment for PANDAS depends on the severity of the disease. In mild cases, antibiotics are prescribed to treat the strep infection. In most cases, this will get rid of the OCD or other symptoms. In more severe cases, children are given a combination of antibiotics along with immunomodulatory therapy.

Doctors and researchers have debated whether PANDAS is even a real disorder. In “A Feverish Debate,” Alison Motluk described the controversy surrounding the diagnosis of PANDAS. She wrote, “Skeptics argued that these findings could be coincidental: the children just happened to have strep when the behavioral symptoms appeared.” She also notes that a research study conducted in 2002 found, “there was no evidence that strep uniquely intensified the symptoms in PANDAS kids.” James Leckman, a psychiatrist at Yale University questioned the validity of this study in regard to the subjects and control group.

I interviewed Ella (names changed for privacy), a 12-year-old girl who was diagnosed with PANDAS disorder at age 8. Her mother, Christine, also answered questions regarding their experience.

Q: Before you were diagnosed, did you know about PANDAS?

Christine and Ella: No

Q: How old were you when you first experienced symptoms?

Christine: She was around 5 years old when she first started getting strep throat. She would get strep throat and then go on antibiotics. Then the strep throat would come back once she was done with the antibiotics. Sometimes we didn’t even know she had strep since she didn’t have a sore throat. Her only symptoms were a headache and stomachache.

Q: What were your PANDAS symptoms?

Christine: Ella had a lot of OCD symptoms. She had to wash her hands all the time. She washed her hands so much they would bleed.

Ella: And I used hand sanitizer a lot.

Q: How long did it take to receive a PANDAS diagnoses?

Christine: It took at least two years until I first heard of the diagnosis of PANDAS. The nurse at the pediatrician’s office was the first person to mention it as a possibility. My pediatrician at the time did not think PANADAs was a real disorder. He said, “People will try to make money off of anything.” He acted like I was crazy when I suggested it. We even started counseling for Ella since the pediatrician didn’t think her behaviors were related to the strep throat.

When she was 8 years old, we ended up going to an ENT who didn’t know much about PANDAS, but also didn’t act like I was crazy for suggesting it as my pediatrician did. The ENT recommended that she get her tonsils out. She only got strep once after the tonsils were removed.

Around this time we also switched to a new pediatrician who diagnosed her with PANADAS and was supportive of her treatment. When she got strep after having her tonsils out, the pediatrician put her on antibiotics for a month.

Q: What was the treatment?

Q: Do you still experience symptoms?

Christine and Ella: No

Q: What advice would you offer for other families?

Christine: This experience was life-changing for us as a family. It was upsetting when we didn’t know she had PANDAS and then when we thought she might have it, our pediatrician at the time didn’t believe in the disorder. It was difficult to have to watch your child deal with mental health issues.

I would say to other families to trust your gut when you think there is something wrong. I also brought someone with me to our first pediatrician for support. I found an advocacy group which was really helpful called New England PANS/PANADAS Association. 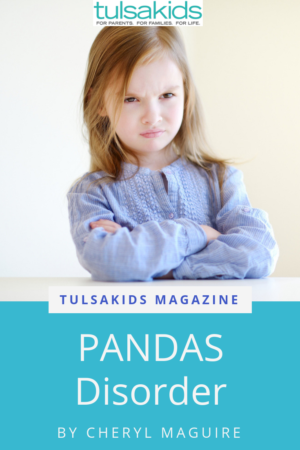