PVT, my hunky hirsute husband, is a Tulsa native – he graduated from Memorial High School about 3 million years ago. After graduating, he spent 15 years away for college, grad school, and his first couple of jobs. During that time, he became somewhat of a beer snob, which is not surprising when many of these years were spent in Portland and Seattle, both incubator towns of the microbrew phenomenon. Rogue, Widmer, Deschutes….just murmuring one of these ale makers would give him a soft, happy look. Oh, and the Northwest brewpubs! McMenamin’s, a chain of quaint and quirky pubs in restored historical buildings, were a favorite haunt of ours. We could sit at a picnic table near a restored farmhouse, quaffing beverages and yapping while the kids ran amok in verdant fields of grass. So he was a bit chagrined to find upon his return to his hometown that most venues served Coors and Bud Light. Gah! Where were the IPAs, the stouts, the dunkel weisse? He declared Tulsa a “beer desert.”

Friends, let me confess first: I know absolutely NOTHING of beer vernacular. While I love a sip of beer, I can’t drink the whole darn pint: for some reason, those hoppy beverages take up too much precious real estate!  (Wine, however, slides down entirely too easily.) But in honor of my beloved spouse and his 15th Father’s Day, I thought we might explore Tulsa’s burgeoning brewpub culture. Because – it’s a thing here now! A big thing, with talented, innovative brewmasters.

We first explore American Solera (probably because American Solera has a micro tasting/tap room conveniently located near the TulsaKids office). American Solera was just named the best new brewery in the US – and the second best in the whole world! It’s the passionate project of brewmaster Chase Healey, who recently sold Prairie Artisan Ales to Krebs Brewing Company.

American Solera is  “a creative craft brewery specializing in the oak barrel aging process.”  I knew wines aged in oak barrels, but I guess beers do too! Most of their beers are aged 6 to 18 months prior to bottling, which gives each beer its own unique flavor profile. So with a cellar of 16 foeders, puncheons (big things holding beer), and wine barrels, the possibilities are endless!

The tiny taproom is charming, right near Dalesandro’s and Burn Co. We gather a little group of TulsaKids ladies and sip some unique, stylistic brews. When I confess to the brew-mistress – is that a term? – that I am more of a wine girl, she recommends the “Biere de Picpoul,” which is actually a beer refermented with Picpoul Grapes – grapes that were trucked in on ice from California! It is crisp, light and fabulous.

The diminutive pixie Tara, our social media editor, puts us all to shame and orders the Maple Dilemma – an “Imperial Milk Stout with Maple, Coffee and Cacao Nibs” – wow! It’s almost like a thick, iced mocha stout. And at 12% alcohol, it is not to be thrown down too quickly. Luckily, you can order pizza at the taproom; because of byzantine Oklahoma liquor laws (which are changing soon!), microbreweries cannot serve food, but brewpubs can.

For serious beer tasting, I enlist PVT and our partners in (mild) debauchery, Mark and Karen.  We head out to the actual American Solera microbrewery on the west side. It’s in a wooded area at the end of a long road — we almost think we’ve gotten lost, but there it is — a little outpost with picnic tables out front, errant cats and dogs, and a comfy seating area inside.

Mark and PVT order sample flights of all the beers; PVT prefers the “Dank of Tulsa,” an IPA (a light-colored beer typically with a higher-than-average alcohol and hop content), and opts to take home an entire  “growler” — that’s a 32-ounce container of beer! All of the beers lean towards citrusy undertones; we all find them a bit more sour than we’re used to, but still eminently refreshing. What fun we have, hanging out in this congenial setting with other serious beer aficionados.

Then we head downtown to Dead Armadillo, a relative newcomer on the Tulsa brewery scene that is growing almost exponentially. Dead Armadillo’s majority owner and brewmaster, Tony Peck, started crafting his brews in a space rented out from a friend in 2013. His beers are more traditional than those we drank at American Solera — Mark and PVT enjoy them immensely.  Their most popular beer is the Amber Ale; the London Ale yeast used “imparts a bold, crisp nose and subtle fruit which leads to caramel sweetness and a dry, bitter finish from the late addition of Cascade hops.”

Dead Armadillo’s “Low and Outside Pale Ale” was brewed specifically for baseball games at ONEOK field — it’s light, but still full of flavor. Their latest beer, Tulsa Flag Pale Ale, is a smashing success: the blonde ale is “crafted with old world specialty malts which lend color and complexity to an otherwise simple recipe.” And, it’s got really great packaging too! 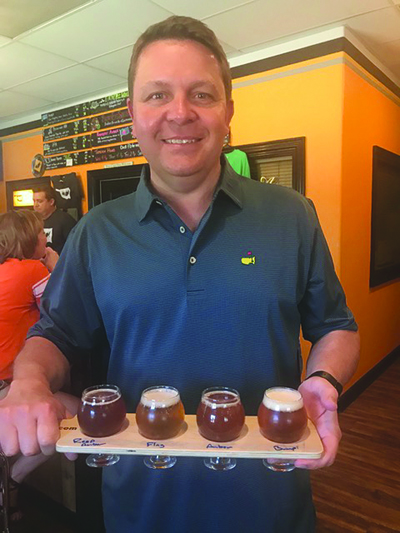 What’s fabulous about Dead Armadillo — besides having a taproom in front – is an area out back called “The Boneyard,” with picnic tables, games like cornhole and washers, another bar area, and a food truck. During our visit it’s The RubTruck serving BBQ. They often have live music. It’s such an idyllic little spot tucked into the shadow of downtown. Hence it has great nighttime views – perfect for private parties as well.

Our merry foursome fritters away a happy hour or so, until PVT and I have to go relieve the babysitter lest we turn into pumpkins.

The list goes on. There’s Prairie Brewpub in the Brady Arts district; their beers are brewed onsite by Prairie Artisan Ales and are delicious as well. My devoted research partner Kelly and I sample a flight of their ales. The featured beer, Prairie’s Birthday Bomb, is especially intriguing to me. It’s aged on coffee, cacao nibs, vanilla beans, and ancho chili peppers.

Prairie, incidentally, is considered a brewpub, which means they can serve food. So bring the kids (especially during Christmas time; their decor is jaw-dropping and outlandish!). 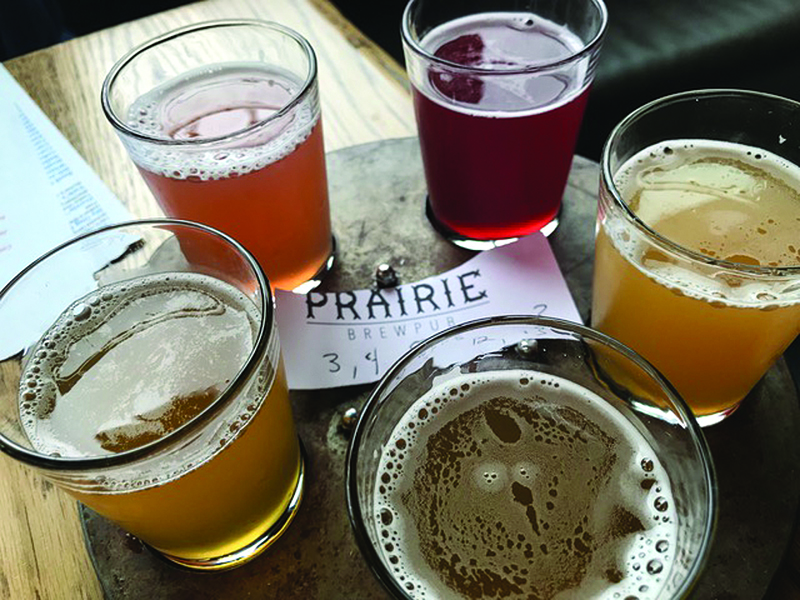 It’s a testament to the growing craft beer scene here that I can’t even fit all the Tulsa breweries in one article. I don’t make it to Marshall’s (the granddaddy of them all), Cabin Boys brewery (with beers like Bearded Theologian and Hefty Bison Hefeweizen on tap, surely they are worth investigating!), Elgin Park…so here’s the solution, mamas — treat that special dad, brother or husband in your life to a tour of Tulsa microbreweries for Father’s Day. He’ll appreciate it so terribly much more than another tie or more power tools.