It was a happy coincidence that I had a topic close to parents’ hearts all ready to go this month since I couldn’t saunter anywhere hip at all besides Braum’s and Walmart (not so hip). We just finished up launching kid #1 into college. What a wild, stomach-churning ride! We’ve learned so, so much with our firstborn about the college application process. Perhaps it’s akin to the sausage-making process – hopefully it all comes out really, really good in the end. As one mom of four whom I admire greatly told me – and whose children went to Yale, TU, Fordham and Notre Dame – “Your kid is going to end up where they’re supposed to be.” So mama, first of all: Don’t worry! 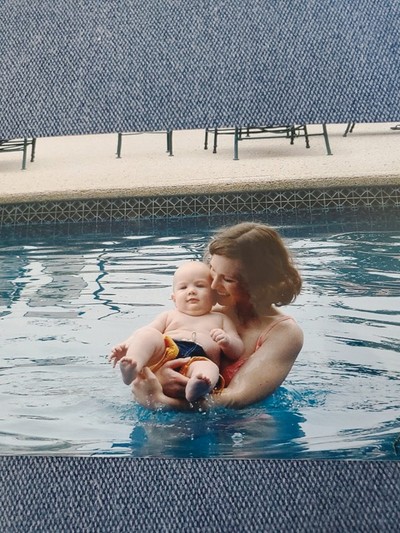 But also, don’t bribe anyone. (Please note: No college officials were bribed in the writing of this article). We hear all sorts of tales of SAT tutors, high-pressure sports teams, laundry lists of activities – all these things kids do (and/or their parents encourage) to get in to the “right” school. Oklahomans probably aren’t in the pressure cooker that some coastal city dwellers or Silicon Valley residents are, but I’ve seen parents let their children’s resume-building take over their lives even here. Let’s take a look at a few pathways and considerations that parents and students should focus on as they venture down the road to their preferred institution of higher learning.

Our lovely son – let’s call him “Eddie” for a modicum of privacy – started out playing soccer at the tender age of 4. He was pretty good! And the competition intensified – when he was in third grade, he was already practicing about two hours twice per week – which is a lot for any family, let alone a family with a lot of babies. And then the traveling games and out-of-town tournaments started. There were hours spent with babies waiting out intervals between games in fast- food restaurants to stay out of the heat. There was a tournament where I was thankful to have a doctor on the team, so he could diagnose two of my kids with out-of-town ear infections. There were innumerable mornings waking children up in dark hotels to get them to a cold sideline.

So much time, so much money. Is all of the time and money worth it? Yes, if your kid – and your family – is loving the sport and the game, and you have the resources to devote to the sport. But it’s not worth it if you’re doing it in the hopes of the fabled college scholarship. Very, very few kids are going to play football at OU. Very, very few kids who get athletic scholarships attend prestigious universities. Generally, there are a few kids who get athletic scholarships to more local schools that are great places to be but don’t have national recognition – something to consider if that’s important to your child.

If your child is passionate about a sport, here here! But don’t do any of it out of hope for a scholarship. As for Eddie, he continued playing and made the high school soccer team his freshman year. About two weeks into his season, he curled up on the couch in a fetal position and refused to go to practice. He had just burned out. I suppose I could have pushed him, but he would have ended up resenting both soccer and me. Instead, he picked up running and track and fell in love with it. There aren’t a lot of running scholarships, but he enjoyed every minute of his meets and hanging out with his teammates.

Extracurricular activities are wonderful! Music, theater, dance, student government, retreats – the list is endless. Several of Eddie’s friends – super-smart kids who had great GPAs but not necessarily the super-high test scores – were very involved in all of these things. But they WANTED to be, and their genuine passion came through in their applications. My darling Eddie cared very little about the myriad opportunities high school offered him – beats me! But several of his friends got in to prestigious universities – Rice and Duke come to mind – because they are really neat kids who thrive from being involved.

Again: love your kid. Encourage them, but don’t force them to do any of this stuff for a resume! You’re a parent, not a life coach.

Well, GPAs and test scores do matter – they’re a gateway into some of the more prestigious schools. So, about Eddie. Eddie is whip smart. He got a 36 on his ACT and is a National Merit Scholar. (When you have many, many children, you are allowed to say things like this when they are true – I’m not bragging. I have other kids who don’t have Eddie’s natural testing ability and academic aptitude, but also work harder and have more street smarts. It’s possible Eddie will end up living in his little brother’s basement in 10 years, playing Call of Duty. I also have a daughter who is artistic, sassy and creative, but the girl has the attention span of a gnat. Trying to homeschool her was like hopping in a WWE ring every morning of quarantine. Exhausting! They’re all different, unique and wonderful, the precious jerks!)

So, when Eddie started getting brochures from very fancy, prestigious places, we were a little flattered and bedazzled – and we let him apply EVERYWHERE. This was a mistake. Only apply to schools you actually could see your child attending, and also – if your child is ACCEPTED at this school – and they receive no aid, merit, need-based or otherwise – are you still willing to send your child there? We didn’t think this through enough.

So Eddie was accepted almost everywhere he applied, including schools like Emory, Vanderbilt, Villanova and Notre Dame. He was interviewed by Harvard, Dartmouth and Stanford and ultimately wasn’t accepted (dang those Ivies! But that’s OK – you probably know a few smart, successful people who didn’t matriculate from Princeton or Yale.)

Now here’s a little nugget: He was waitlisted at Washington University in St. Louis and Tulane – both of which are prestigious schools but certainly no more prestigious than, say, Vanderbilt. PVT trolled the message boards and discovered that some schools place a lot of importance on a student showing “demonstrated interest” in a college – either a visit, or some kind of email correspondence with the school. They don’t want to risk accepting a kid who is likely not going to accept and then make their yields look less impressive! So, if your kid is really, really interested in a school, make sure the school knows it!

This is the killer. College – any college – is really, really expensive. We had hoped that Eddie might receive a merit scholarship at his dream college. But I suspect even if he had launched an orphanage in Guatemala via Kickstarter and designed his own blood pressure tracking app, AND had a small chihuahua rescue operation on the side – while still maintaining his GPA and remaining “passionate” about track, cross country and other school activities – he still might not have received any merit-based aid. Or maybe he would have, but these merit scholarships are like unicorns – rarely seen and heard of!

As for need-based aid, there seems to be a vast middle swath of us who don’t qualify for need-based aid, but can’t actually afford full MSRP at many colleges because we aren’t backed by a trust fund or rich grandparents. But that’s ok – there are so many factors to weigh in the long run such as whether this kid might go to grad school, how you’re going to afford other siblings, travel to and from college, whether mom has to give up pedicures and margaritas on Friday. I’m kidding. Not really.

Well, we had a few days left to go before May 1. We had three colleges remaining in the mix: the University of Notre Dame (the pinnacle of higher education – and football – for Catholics in the US). Trinity University in San Antonio, a small, excellent liberal arts school dotted with palm trees which happens to be PVT’s alma mater. And Fordham University in New York City – a dark horse made very appealing from their merit aid offer and my son’s apparent love of big cities, inherited from his mama.

Eddie desperately wanted to go to Notre Dame. We desperately wanted to help him get there. PVT drafted up spreadsheets showing what cuts we would need to make to our budget, and the loans we all would need to incur. (Mix this drama into quarantine – there was a lot of low-hanging angst chez VT!) And Fordham? So intriguing, with a great business school – one of Eddie’s interests – but we couldn’t visit! And it’s possible that if the specter of COVID-19 hangs over any campus in the fall, it would hang over Fordham. 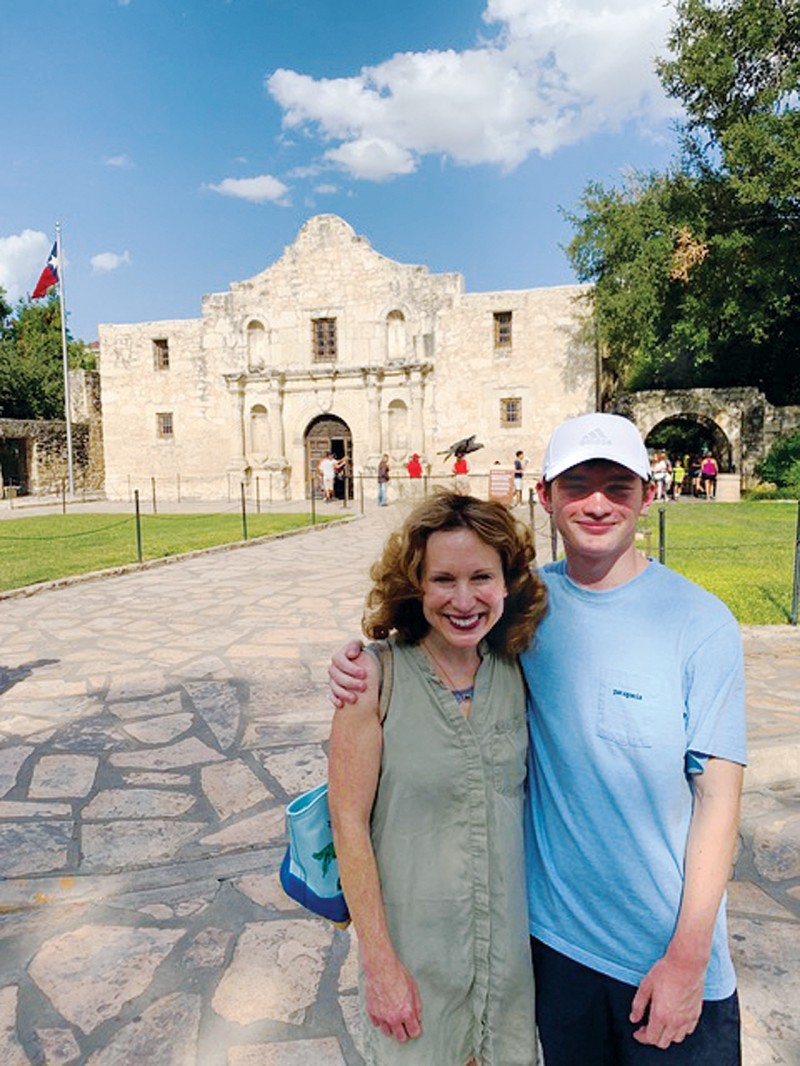 Our wonderful Eddie is going to Trinity in the fall. He’s excited to move to this beautiful, sun-speckled campus. Sure, I think he’ll always be a little wistful about not attending Notre Dame – but all of us are relieved not to incur so much debt with kid #1. Maybe, if he doesn’t jack around, he’ll go there for graduate school.

So, mamas, love those high school kids, hang in there, and don’t let them apply to every school in America. And stick around – I’ll probably have a completely different college application story to tell you in a couple of years! Kid #2 – what’s his name? Moe? 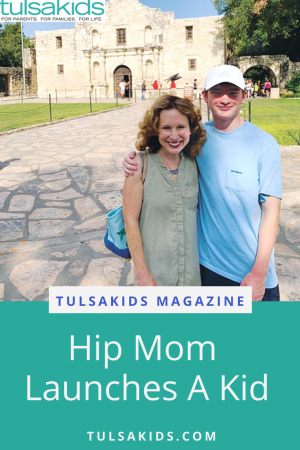