Who Will Love My Child When I’m Gone?

What Worries Parents of Adult Children with Disabilities 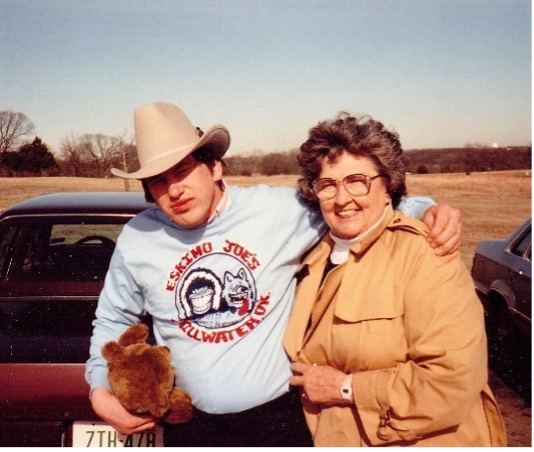 David and our late mom, Esther.

“David, my wonderful David. I miss him so much, and we just took him back today. I had a lump in my throat all the time we were getting ready to go. He was ready to go ‘home.’ He’s been here for a week. We’ve had a good visit even though we’ve been snowed in most of the time. I felt like crying even after we got back. His life is so narrow, but I don’t know how to change that. I’m thinking of the Christmases we won’t be here any longer, and he will probably have to stay there or somewhere. Will he understand, and how much will he cry, and how angry will he be? Who will care as much as I do? No one, because he is MY child. I wanted to keep him at home, but that wouldn’t work. We can’t keep up with him.”

Not long after she died, I found the above entry in my mother’s journal. Tears flowed freely down my face as I read her raw words. It ripped my heart out to think of the emotional turmoil my mother hid inside. It filled me with shame that she didn’t know I would always be there for my brother. It made me incredibly sad to think of all the nights she stayed awake worrying about her son, the man who had struggled enough for ten lifetimes of pain. He was her only son, and she was afraid no one else would love him the way she did. 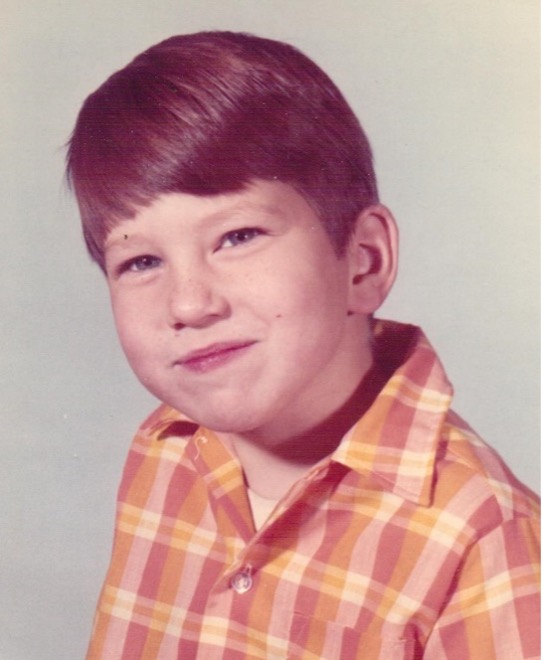 My sweet little brother, with an impish grin, at about eight years old.

It was less complicated in the early years when David was a smiling, freckle-faced, blue-eyed, cute kid. He looked so “normal” that it was sometimes easy to forget he was intellectually disabled. Everything seemed fine when he was born, but my mother began to worry when my brother started missing critical developmental accomplishments. He was her fourth child, so she was well-versed with the timing of typical milestones such as sitting, crawling, walking, and speaking. Doctors repeatedly brushed off my mother’s concerns until David was three and could still only say a few words. David was diagnosed with “mental retardation,” the umbrella term given at the time for intellectual disabilities of unknown cause.

My mother was a smart woman, and although it was challenging to find resources in the mid- 1960s, she became a strong advocate for her son. He went to Sunnyside for pre-school, a private school organized by parents of young children with special needs. Eventually, David attended special education classes in Tulsa Public Schools and graduated with an alternative diploma when he was twenty-one. That’s when the problems escalated.

David was no longer the cute, compliant kid. He was a grown man with nowhere to go and nothing to do. David had aged out of the public school system, his siblings had all grown up and moved away, and he was alone all day with his rapidly aging parents. Yes, he had graduated, but he had graduated to the couch and the television. That lifestyle was not healthy for anyone in the home. 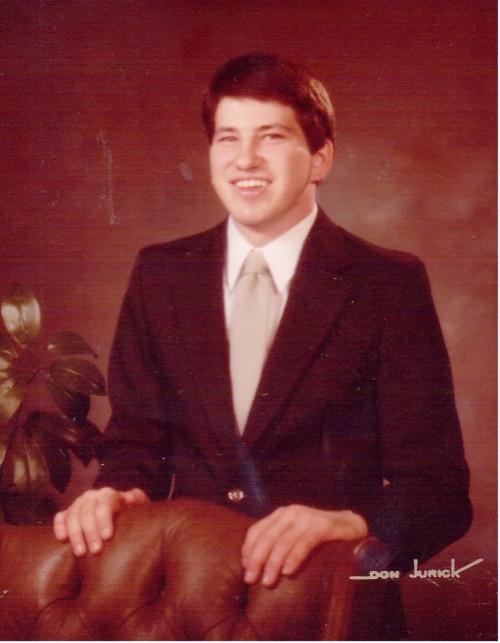 David was looking happy in his high school graduation picture. We had no idea how difficult the next ten years would be!

David began “acting out” more frequently, hurting himself and sometimes hurting others if they got in his way during an angry outburst.  David was miserable and needed more activities, friends, and a purpose in life, but at the time, there were no programs available for him in Tulsa.  I tried to help my parents by occasionally taking care of my brother, but after my eye finding itself on the receiving end of his angry fist more than once, I knew I was no longer safe being alone with my brother. Fortunately, he saw our mother as “the boss” and never hurt her, but another violent episode of David’s resulting in a family member being hospitalized forced a decision. By this time, my father was in his late 70s, and it was painfully apparent the situation was no longer safe.

Although it broke my parents’ hearts, they decided to seek placement for David in an Intermediate Care Facility. It wasn’t easy for anyone, and it wasn’t an immediate fix. David continued to self-harm, leading to blindness in one eye. He lashed out at others, resulting in an arrest for assault and battery. Although the reality of my brother assaulting a stranger was devastating, the arrest turned out to be the key to getting help. My brother’s IQ in the low 50s meant he couldn’t be sentenced to prison, but the judge ordered a 90 day stay in a psychiatric unit. David was thoroughly evaluated, diagnosed with schizophrenia in addition to intellectual disabilities, and placed on different medications.

After several unsuccessful placements, my brother finally found a true home at Lake Drive Home in Henryetta, Oklahoma. Through a combination of pharmaceuticals, a behavior modification program, and a staff who seemed to genuinely care for the residents, my brother’s behavior and life satisfaction improved. My parents visited weekly, talked to David on the phone twenty times a day, and brought him home for weekend visits once a month. David made friends, had a job at the workshop in the backyard of his home, and loved going on field trips and eating in the dining hall. He had visited all the dorms his three sisters lived in at Oklahoma State University and thought his room was even better because he and his roommate had a bathroom. Finally, he had found a place where he fit in, a place where he was loved.

Just eight months after our father died, my mother was diagnosed with Stage Four pancreatic cancer. She wasn’t ready to go, but it soon became obvious there wasn’t a choice. I assured her over and over again I would always take care of David. We hired an attorney, went to court, and I became David’s guardian.  The legal ruling seemed to reassure her in a way my promises didn’t.

When David came to visit for the last time, our mother explained that she was dying. He sat and held her hand and listened as she explained that I would be coming to visit him and that he could call me. My brother said, “so sad,” and then went to the kitchen in search of food. He loved our mom, but his constant obsession with food was the more vital need. After David left, our mother slipped into unconsciousness and died a few days later. She had to know her son was going to be okay before she could let go.

Although I may be presumptuous to write this in my mother’s place, I believe the last ten years as my brother’s guardian have given me an insight into my mother I wouldn’t have had otherwise. I can never know what it was like for her to be David’s mother, just as she could never understand my role as his sister. There were times in the past I resented that David received most of our parents’ attention, but through being his “person,” those old wounds started healing. I began to understand that with four kids, one with intellectual disabilities, mental health, and behavioral issues, our mother was forced to ration her physical and emotional resources. I understand now that my mother didn’t love me any less, but she was like a triage physician, taking care of the one with the critical needs first.

After our mother died, I acted out of a sense of obligation, going through the motions of visiting, writing letters, and calling my brother because I knew it was the right thing to do. In the ten years since our mother’s death, my brother and I have discovered a closer relationship. We’ve bonded over shared loves of swimming, basketball, and pizza. We’ve raced 5Ks with Ainsley’s Angels, David riding in a wheelchair as my husband and I push him. We’ve gone to dances where I help him dress up and practice asking a girl to dance. We’ve watched Wizard of Oz and Cannonball Run DVDs too many times to count! I’ve stayed in the hospital, making sure he doesn’t pull out his IVs after surgery, bribing him with ice cream to get him through the scary procedures. I’m his sister, his advocate, and occasionally my feelings towards him verge on maternal.  As my brother and I enter our “senior” years, I sometimes find myself echoing my mother’s sentiment, “Who will love my brother after I die?”

Having a child with intellectual disabilities can be a long and winding road. Every family experiences their own unique journey, some are smooth, and some are rough. My family’s experience was a long road full of potholes and detours with occasional moments of random joy, like when you find the coveted Dairy Queen on a lengthy road trip. We’re not at the end of our journey yet, but we have found a comfortable rest stop, a home, and a life where David is accepted and loved.

If I could say one thing to parents of adult children with disabilities, it would be to plead with them to make a plan for what will happen after their death. Don’t be unrealistic and think you will live forever. It’s a great gift to everyone involved, but especially to your adult child with disabilities, if you make plans to ease the transition after you’re gone. I can’t imagine how tough it would have been for all of us if we’d had to handle grieving our parents’ death while scrambling for a placement for David. I have silently thanked my parents countless times since they died for having done the work to find a place where David is happy. His needs far outweigh what I could provide for and have any quality of life for myself and my family.

If I could say one thing to my mom, it would be, “Mom, please don’t worry. David is happy, David is loved! Maybe no one will ever love a child exactly as their mom does, but I promise you David is loved!” 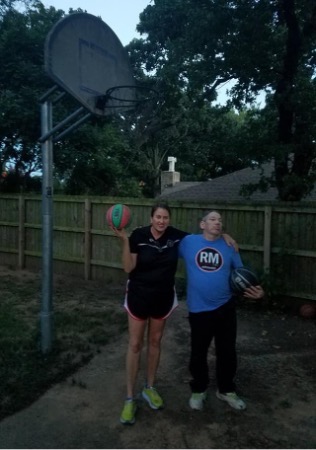 We love to play backyard basketball. David is a formidable opponent!

If you need assistance with making long-term plans or any other needs involving intellectual disabilities, contact The Arc of Oklahoma. 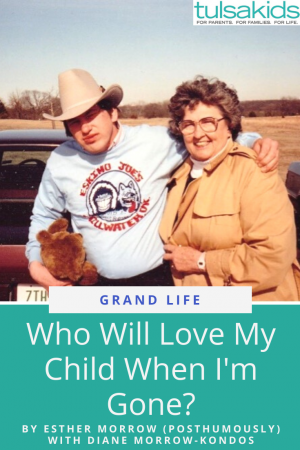