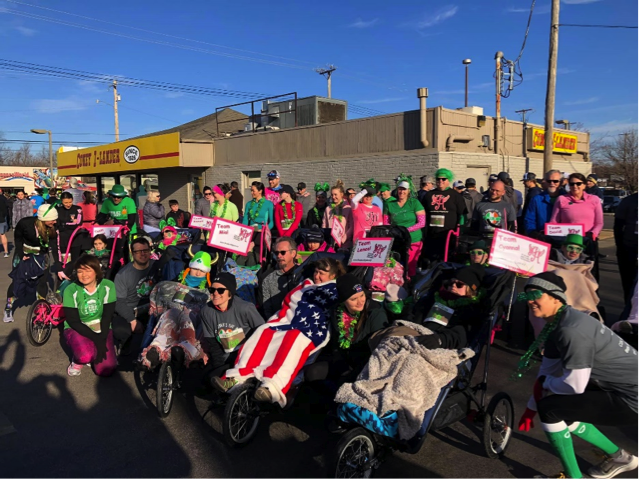 I became a runner after my kids left for college thirteen years ago, eventually also becoming a triathlete. As the years pass, my pace becomes slower, but I have to keep running, the running community has become an integral part of my life. My brother, who has intellectual and some physical disabilities, is another major part of my life, and I’ve discovered there’s a way to join the two – Ainsley’s Angels! My time in Saturday’s race was my all-time record for my slowest 5k, but it was also the best 5k I’ve ever experienced! 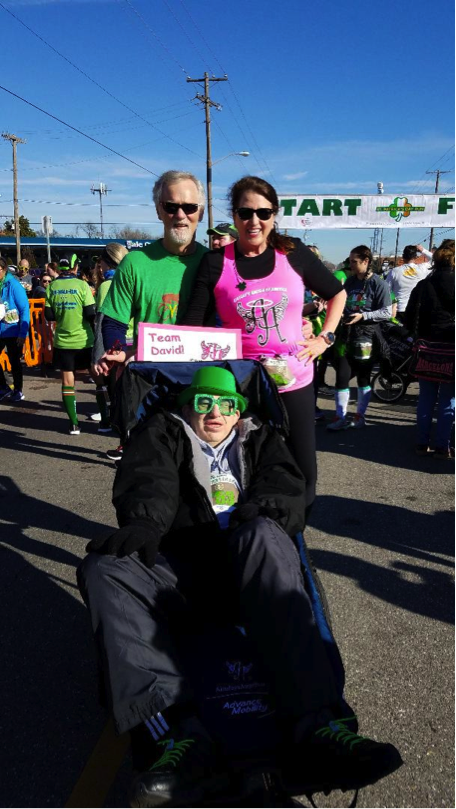 My husband I were the runners for my brother. Together, we are Team David!

Ainsley’s Angels is a community of runners that team up with people who have either special needs or disabilities that prevent them from completing an endurance event independently. Tulsa currently has riders that range in age from three to sixty. Each rider is accompanied by a team of two or three runners. Ainsley’s Angels runners have participated in everything from 5Ks to the Route 66 ultra-marathon, and plans are being discussed to enter the world of triathlons! Ainsley’s Angels’ mission statement is as follows: In addition to ensuring everyone can experience endurance events, Ainsley’s Angels of America aims to build awareness about America’s special needs community through inclusion in all aspects of life, by promoting awareness, providing education, and participating as active members in local communities. 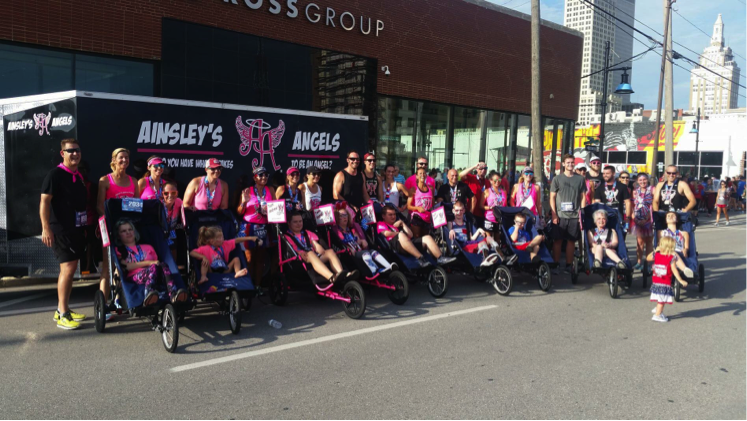 Look for us at local races, we’re usually wearing pink and black, and please make sure to cheer for the riders!

Ainsley’s Angels is a Nationwide organization that came to Tulsa in 2017 when Jana Rugg accepted the role of Volunteer Ambassador. Jana describes her first experience as an Ainsley’s Angels runner, “My first experience with AA was in April of 2017 when the Ambassador from the Enid area created a race opportunity for a few riders here in Tulsa. I pushed Kenzi in that race and I was HOOKED! Having run for several years I had met a number of personal goals and personal records but this was a whole new level of satisfaction from sharing my ability to run with someone who is not able to run on her own. It gave new purpose to running and inspired me to make running possible for others!”

Jana Rugg used that enthusiasm to create what is now an active and large community of Ainsley’s Angels riders, runners and Guardian Angels. Ainsley’s Angels is completely run by volunteer power! At the St. Patrick’s Day run this past Saturday every chair was filled–eighteen Ainsley’s Angels teams! The racing strollers, which are also called chariots, are not cheap; they range in price from 1,000 dollars to 3,500 dollars for the bigger chairs that will accommodate adult riders. The larger chairs can also be converted to bike carts for bike rides and triathlons. Tulsa’s Ainsley’s Angels has eighteen chairs which have been purchased through donations but could easily fill many more on race days. Donations are happily accepted (and are tax deductible!), and if a company would like to purchase a chair, they can have their company logos printed on the chair to show their community support! 95% of donations stay in Tulsa to maintain equipment and purchase new chairs. 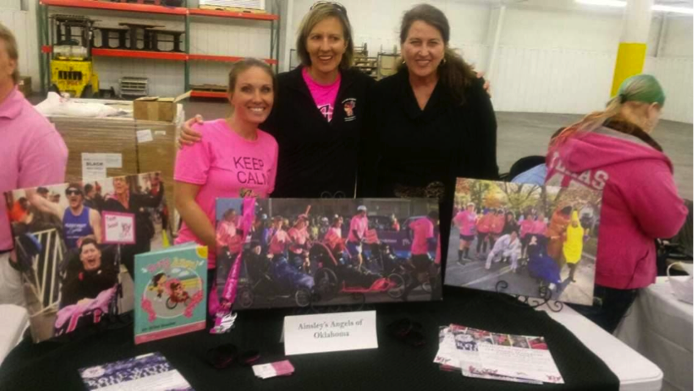 Even if you’re not a runner, there are numerous ways to get involved! We had a booth at a recent Disability Resources Event.

This past Saturday was Team David’s first race as part of the Tulsa’s Ainsley’s Angels and it was a great success! We weren’t the fastest, in fact we were towards the back of the pack, so we can’t be considered winners by looking at the results list. Sometimes the most important victories can’t be quantified.  I measure success by watching my brother excitedly wave at the crowd when they called out his name. I measure success by my brother’s response when I asked him half-way through the race how he was doing and with a big smile he answered, “Perfect!” I measure success by how many times he looked at the medal hanging around his neck the rest of the day and proudly said, “Look what I got!”. He loved getting dressed up as an Irish version of Elton John, felt great about participating in an athletic event, loved being part of a group of riders and runners, and he enjoyed being included in a community event. And we can’t forget the part he might have enjoyed the most- the eagerly anticipated post-run doughnuts!

There are many ways to get involved; even if you’re not a runner, there are roles to fill as a cheerleader, a person that assembles chairs, people to work at the races and advocacy events. If you’d like to be part of Ainsley’s Angels or find out more about Ainsley’s Angels go to their Facebook page Ainsley’s Angels in Oklahoma or contact them directly at tulsa@ainsleysangels.org

To donate you can go to : https://crowdrise.com/aaintulsa/fundraiser/janarugg 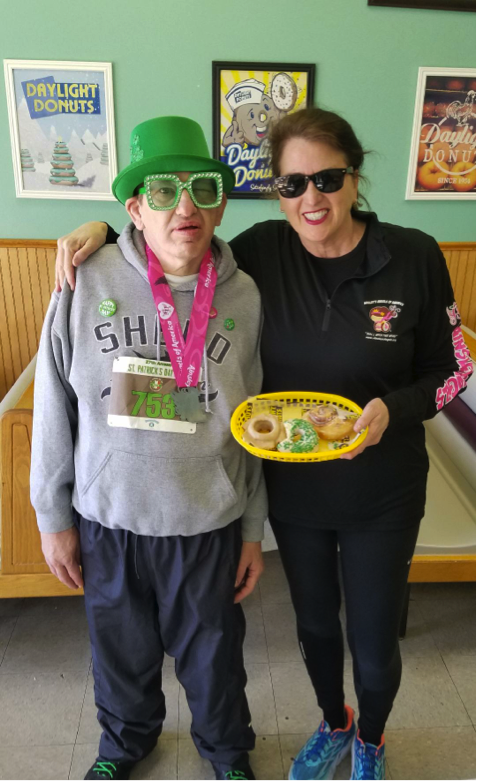 One of the perks of running is the post-run doughnut shop trip. 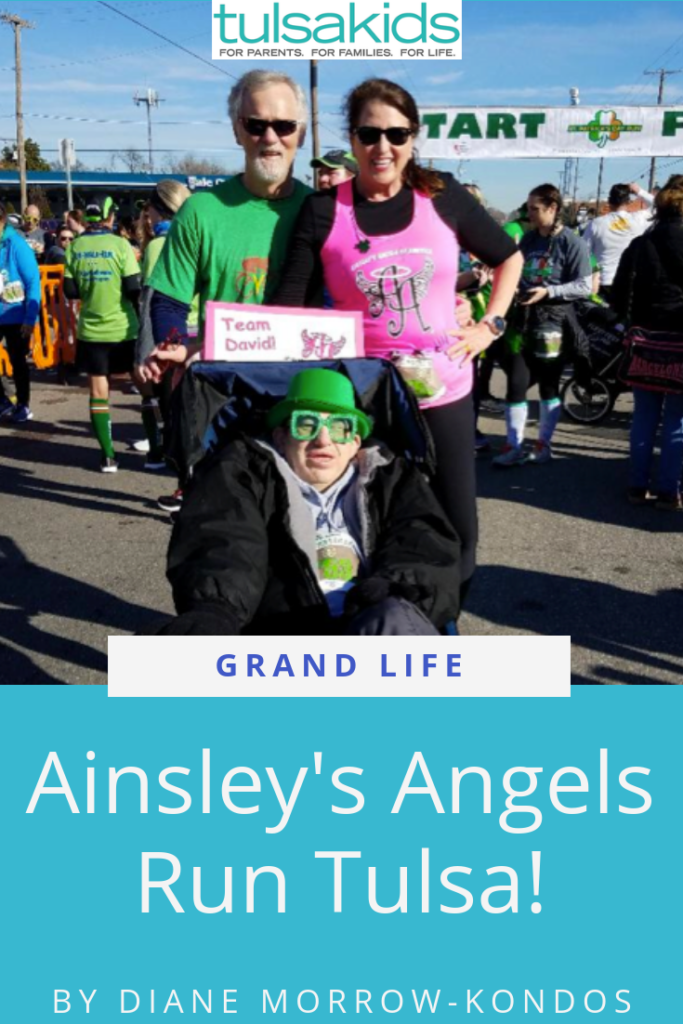