My 5-year-old daughter and I tend to get into major power struggles in the morning. I make her the “wrong” breakfast. She wails like I’m torturing her as I attempt to brush her tangled curls. Fresh snow covers the ground and her party shoes are the only shoes she’s willing to wear. She’s on the floor, crying and flailing her arms before I can finish saying “snow boots.” We are running late (again) but I take a minute to lock the bathroom door, turn the vent on and cry. Why is this is so hard? What am I doing wrong?

According to experts, my error is obvious. I’ve forgotten to start the day with connection.

Instead of “making a deposit” in my child’s bank – in the form of cuddles, reading to her or even asking how she slept, I’ve attempted to make a number of “withdrawals.” I’ve forgotten that my daughter’s brain is just not wired to accommodate that.

As Daniel Siegel and Tina Payne Bryson explain in their groundbreaking book The Whole-Brain Child, not only are the structures of a child’s brain still forming, so are the pathways connecting them. The connections between the various parts of the brain are what allow adults to function like adults (most of the time, anyway). You can credit those connections every time you use logic to push through fear or hold your tongue in a meeting with your boss when you’d rather throw the nearest object at her head. On the other hand, when you’re wondering why your kid loses his mind when you cut his carrots into slices instead of matchsticks, much of it has to do with the fact that his brain is still immature.

Though it takes at least 20 years for the brain to fully develop, there are steps parents can take to make life more bearable in the meantime. According to Siegel’s concept of interpersonal neurobiology, secure attachments in childhood facilitate the brain’s ability to function as an integrated system. In other words, focusing on the relationship with your child, rather than all of the tasks she must complete, will not only make your mornings easier, but it will also promote your child’s optimal brain development in the long run.

One of the key takeaways from The Whole-Brain Child is that it’s crucial to connect with your child on an emotional level before trying to reason with her. The best way to help a kid through a tantrum is to first hug her or offer some other non-verbal sign of affection, like a loving, concerned look, a gentle pat on the arm or a squeeze of her hand, and talk to her after. Only after the child has calmed down enough to engage in conversation or to quietly listen can she actually absorb anything you’re saying, whether you’re offering a pep talk, empathizing or offering alternative solutions to the problem.

According to Siegel and Payne Bryson, pausing to establish a connection serves a dual purpose. First, it strengthens the bond between you and your child, connecting you to each other. Second, this connection facilitates the building of connections between the distinct areas of the child’s brain.

Parents who struggle with mornings that devolve into a frantic race against the clock in an attempt to drop a cranky kid off at school on time with two matching shoes often find much of the stress can be circumvented by taking a moment to connect before the storm erupts.

Clinical psychologist and parenting expert Dr. Laura Markham recommends snuggling with your kiddo for five minutes as he wakes up as a way to “fill your child’s cup before the day starts, and reconnect after the separation of the night, which gives your child motivation to cooperate instead of fight with you.” If five minutes of snuggling feels unreasonable, try two minutes, or even one. If snuggling in bed as your child rouses doesn’t fit with your routine, try something that does. It could be reading together, scratching his back, or simply holding his hand and making eye contact as you say good morning. (I’ve tried all of these). One friend said that even if he’s already up and dressed, she gets back into bed with her son as soon as he’s up and spends a minute or two doing a simple gratitude ritual together, where they simply say a couple of things they’re thankful for.

Whatever way you choose to connect with your child as you start the day, make sure it’s part of your morning routine. According to parent educator Kelly Pfeiffer, routines and connection work best when they’re used together. She suggests parents begin the day with some form of connection (i.e. two minutes of snuggle time) and intersperse other forms of connections throughout the morning, such as creating a silly morning song together, giving high fives, or sharing the joke of the day.

In my own quest to make mornings more bearable, I’ve been pleasantly surprised to find how far even the briefest moments of connection take us in terms of setting the tone for the day. Some mornings, there’s time for my daughter to climb into bed with me for a few minutes.

But when I’ve accidentally set my alarm for p.m., we’re running 20 minutes late, my daughter has to eat breakfast in the car and every fiber of my being wants to bust into her room and say, “Why are you playing!? You should be dressed by now. We are running so late!”, I stop myself. Instead, I take the time to enter her room slowly, greet her with a smile, rest my hand on her shoulder, and look her in the eye while I say “Good morning. How did you sleep?” It turns out, I don’t have time not to.

This article was originally published on Motherly. 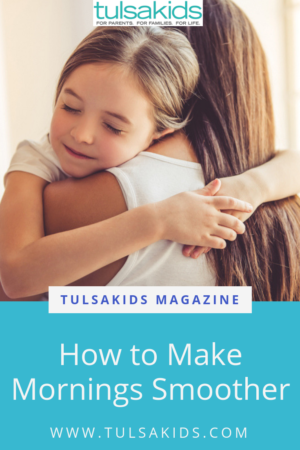