Tulsa: The Paris of Oklahoma

I don’t think it would be terribly inaccurate to say that almost every American female at some point in her life becomes a little obsessed with all things French. The source of the fascination probably varies:  For some, it’s seeing a movie like The Red Balloon, that haunting movie that captures a little boy and his balloon as they traipse through the streets of Paris. Or perhaps it’s a grown-up movie with the regal, enigmatic Catherine Deneuve. Parapluies de Cherbourg, anyone? Or ANYTHING with that dashing Frenchman, Olivier Martinez. Perhaps one is introduced to French cooking or a sublime French meal and falls in “amour fou” (that’s crazy love!) with the French way of eating. Perhaps a girl develops a passion for Julia Child, or perhaps she reads that (slightly smug) book French Women Don’t Get Fat and becomes enamored with French diet and beauty secrets. Or perhaps a girl is lucky enough to make a trip to France, becoming captivated with the “City of Lights,” not believing the breathtaking cityscape or the undulating green French countryside. Maybe she cannot believe how lithe, how effortlessly stylish and chic those darn French ladies are – and how DO they tie those scarves like that, anyway?

Whatever the source of one’s Francophilia, is it possible to enjoy anything French-y here in Tulsa, Oklahoma? Was Chandler Bing (of “Friends” fame) onto something when he called Tulsa the “Paris of Oklahoma?” Well, I decide to investigate.

A great place to start your search for all things French is the Alliance Française of Tulsa (www.aftulsa.org).  The group holds informal “Café Conversations” at Mod’s Coffee and Crepes downtown, where both the fluent and not-so-fluent can chat and practice their French.  At the group’s last session, they even had bona fide French singer, Marcel Van Dam, crooning away for them! The group is very friendly, patient and super informal – they don’t care how fluently – or how horriblement, in my case – you parlez Français.

The group also hosts “L’Heure du Conte” – that’s storytime – for your little ones. The Brookside Library hosts this event monthly. I drag my little girls there, ages 3 and 1. They are much happier to scamper about, but at least they hear some beautiful French from a native speaker as she reads several stories, oui?

Guess what else? You can decorate your house like a Frenchwoman too! I’m sure you’ve all heard of Charles Faudree, the Muskogee native who made himself a household name designing homes in the “Country French” style? When I visit his Cherry Street store, I discover he has retired! No worries, though, for the would-be Francophile decorator; Linda James is carrying on French design in Tulsa under her new store, Linda James Antiques. Charles designed two houses for Linda, and she says that once they met, she was so charmed, they became great friends. Like Faudree, Linda adores France. She personally curates all of the items in her store and hauls them back from buying trips she takes to France (now there’s a nice gig!). She also buys a few exceptional English, Swedish and Italian items. But the overarching theme of her store is distinctly French. Look at the curves and distressed finish of this beautiful loveseat – it looks like it’s a piece straight from La Petite Trianon. French tea sets, silver, dinnerware and other delights abound. 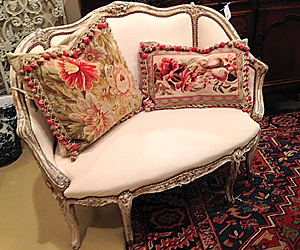 What about eating à la Français in Tulsa? Well, all is not lost. There is the aforementioned Mod’s Coffee and Crepes, which features a variety of both sweet and savory crepes (my favorite is the spinach and artichoke crepe). Even my kids like these fluffy concoctions and, since they’re made to order, there is the additional fun spectacle of watching the crepes being made. And, when they’re chock-full of fruits, cheese and vegetables, so very healthy! Mod’s also makes its own gelato in house – the lower fat version of ice cream – but just as ambrosial. 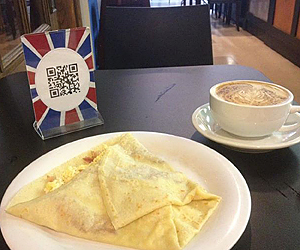 And then there’s that 34-year Tulsan institution, The French Hen. Tucked behind a UPS store in an unobtrusive strip mall at 71st and Yale, it’s easy to miss this little bistro. I take my dear friend Kelly for lunch here, and the ambiance is just perfect – warm, cozy, with excellent, attentive service that is not overbearing. The server knows just what to do, when to interrupt, and when to let us keep rattling on about babies and books and Julia Child. When we hesitate to order a glass of Pinot Noir – because hello!  Kids to pick up! Middle of the day! – he suggests we split a glass. Parfait! We both share the Fried Oysters with Pernod and a sublime Forest Mushroom Tart with chèvre. We enjoy these both so much that we forget to order our entrée, a Gnocchi Niçoise! The menu is full of other Gallic delicacies such as Escargot, Beef Bourgignon, French Onion Soup, “Sweetbreads Champignon” (I think that’s stuff like pancreas, but I’m not going to verify that), and Sautéed Calves Liver. Gah, I ought to try these when I’m feeling more adventurous! 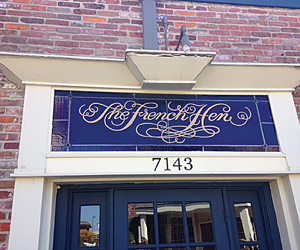 And now, the million dollar French question: How does one dress like a French woman – here!? Well, there are no French clothing stores per se that I discover. Fortunately, though, a French woman will tell you that she owns her own look, carefully chooses her own clothing and accessories, and only buys the best of what she can afford. In that vein, I look to two of my favorite, super high quality and fashionable stores in Tulsa. Rope on Cherry Street, owned by the beautiful auburn-haired Laura Scott, is first.  She models a chunky knit merino wool sweater from a French company, IRO. She styles it with the long- sleeved, striped tee from Edith A Miller, distressed slouchy straight blue jeans from NSF, pointed flats in Cheetah by Loeffler Randall, and a leather-studded tote bag from Loeffler Randall. Says Laura: “For me this has that effortless French style in mixing classic pieces in luxurious fabrics with texture and print. Easy elegance that you can wear dropping your kids off at school to lunch with your friends to a trip to the museum to a date night out on the town.” Mais bien sûr! 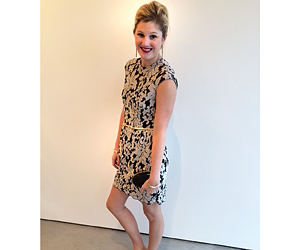 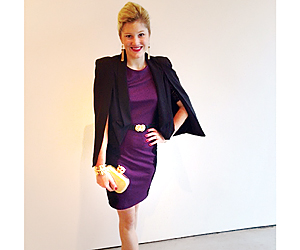 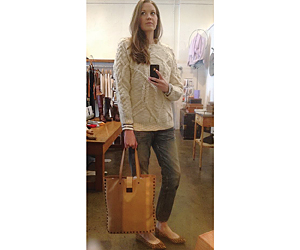 And Kelly Mize, owner of the Little Black Dress on Brookside, shows off a couple of French-y ensembles, modeled by her lovely employee Kara. Kara dons this black and white Dolce Vita backless dress, and pairs it with a clutch and belt, along with a simple bracelet and waterfall earrings – she looks sublime.  With the careful fit of the dress, and attention to the perfect accessories – très Français! She also models a Melanti Ponti Dress; it is a purple knit with intricate black lace detailing on the sides. She pairs this with a black capelet by Line & Dot – and voilà! Kara is ready for a little stroll down the Champs Élysées.

So, allons-y! Go about having your own little French adventure right here in Tulsa.  A little joie de vivre is right around the corner.