Tulsa: A Hip and Magical Place for Book Lovers

I don’t know if there’s anything in the whole wide world (besides getting a botched lobotomy?) that kills those abstract-thinking, intellectual brain cells faster than becoming a mother. Eons ago I had a decent-paying job, and, during my free time, I actually read big, heavy books that required thought. Now my literary aspirations end with Facebook and Vogue.

My sister, a cerebral, fancy-pants lawyer, just had her first baby. Despite her big brain, she can’t even form a coherent sentence, so exhausted is she from nursing and poop-monitoring. I’m just starting to emerge from that newborn/baby fog – so I have a spare eight minutes per day, enough to wonder, “Gah! I should be doing something with this brain of mine before it goes totally fallow and ices over into permafrost.” That would be a shame, yes? (Don’t answer that!)

So, I was terribly intrigued when I saw a piece about Booksmart Tulsa, a sort of literary flash mob. Booksmart Tulsa is not a book club; it’s more of a titillating series of appearances by very hip authors – so hip that you’re not sure why they’re here in flyover country! But this minor miracle is due solely to the efforts of a visionary Tulsa writer and native Bixby bookworm, Jeff Martin.

Jeff is an author (his book The Customer is Always Wrong was featured on NPR, and he got to go on a book tour!), and a former community-relations manager at Barnes and Noble. He used his contacts in the literary world to start what he thought was a personal “passion project” back in 2008, but his project has become quite a juggernaut for book geeks. The first Booksmart event was held at McNellies. Jeff expected maybe a few dozen people, but over 300 people trekked in to talk books. 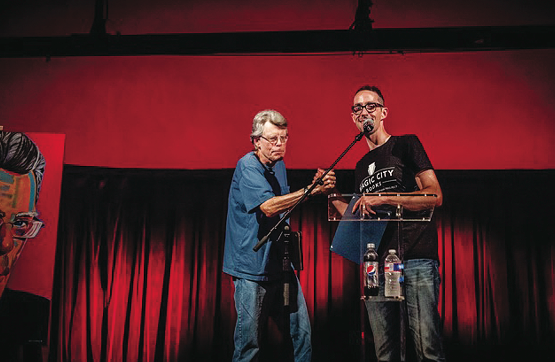 Jeff Martin and Stephen King at a Booksmart Tulsa event.

Since that first event, Jeff has pounded pavement to get hotels to donate rooms for authors and venues to hold the events. Budget was nonexistent (Jeff thinks only $500 was spent the first few years), but he has been able to use his literary Rolodex to create a bit of a buzz. Now authors share their enthusiasm to add Tulsa to their talks and book tours. Hence, writers such as Stephen King (an event which drew thousands), Elizabeth Gilbert (of Eat Pray Love fame), David Sedaris, Salman Rushdie, Jodi Picoult, BJ Novak and so many more, have made stops in Tulsa. Booksmart’s track record has earned itself a great reputation among authors — both emerging and famously established.

For me, Booksmart hit the mark by inviting Ayelet Waldman — an author I have revered for years — to speak at the Congregation B’nai Emunah in February.

You might remember the little literary tsunami Waldman caused a few years ago when she had the audacity to confess in a New York Times essay that she loved her husband more than her children. The horror! The resulting furor fueled her book tour (including a Tulsa stop) for Bad Mother: A Chronicle of Maternal Crimes, Minor Calamities, and Occasional Moments of Grace, which is a hilarious reflection on the tribulations and triumphs of motherhood.

Waldman’s most recent Tulsa presentation, however, was for her latest book, A Really Good Day, about her experiment with “microdosing” LSD (acid) to help her with her crazy mood shifts. I know, it sounds a little out there for a mom of four, but Waldman has done her research, documented beautifully in the book. And she was quite desperate: She struggled with suicidal thoughts during her “PMS” phase, but she never could predict her cycles as she entered perimenopause, that phase which strikes dread in the heart of almost every female. She tried the usual suspects – Zoloft, Prozac – but they left her feeling spacy and not herself.

In her prior life as a federal defender for drug addicts, she had seen up close the horrors of methamphetamine and heroin, but had actually heard anecdotally about the many positive outcomes people had experienced on LSD. When she read studies on microdosing – taking essentially about one-tenth of the dose one would need to experience a “trip” – she decided to experiment to see if the small amount would regulate her mood swings.

Note that she doesn’t tell her children about her (illegal) experiment. At the same time, she thoroughly expects her teenagers will experiment with drugs. She even purchases “drug testing kits” for her kids so they will know whether their potential drugs are contaminated! Now I’ll admit I’m a bit harsher on the conversation about drugs with my kids: “I will kill you if you try get within 800 feet of any drug EVER” is sort of my philosophy. We’ll see how that works out. 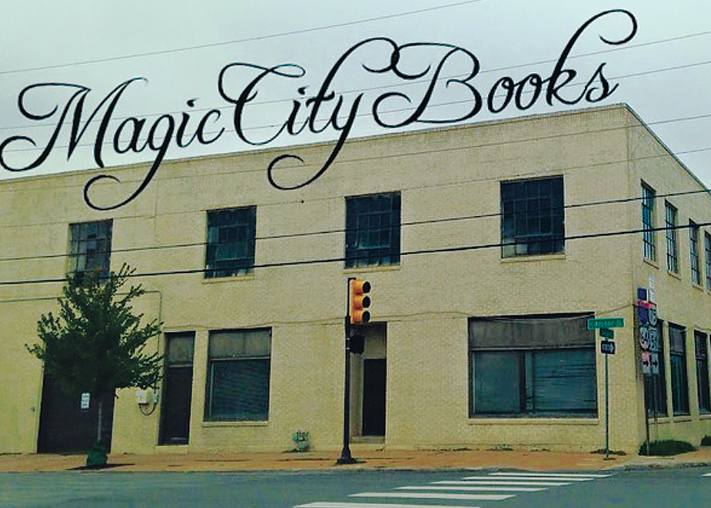 Magic City Books at the corner of Archer Street and Detroit Avenue.

Of course not all the Booksmart speakers and authors are quite as controversial as Waldman. Jeff purposely invites a wide range of writers with all sorts of backgrounds and viewpoints. As it has evolved and gained notoriety over the years, Booksmart has become a trusted literary stalwart, forming a partnership with the Tulsa Literary Coalition (TLC), a nonprofit organization headed by Cindy Hulsey, previously with the Tulsa City-County Library.

Looking at what was missing in Tulsa, Jeff and the TLC recognized the need for an independent bookstore for author presentations, and to create a local literary oasis, so they formed the concept of Magic City Books. With the help of the George Kaiser Family Foundation providing a location, Magic City Books, located in a 1920s-era building at the corner of Archer Street and Detroit Avenue, will open soon in the Brady Arts District. As a project of the TLC, and true to its name, the bookstore will be a magical space full of books as well as providing a literary refuge for the community to gather, chat and imbibe.

But, wow, what fun it was for me to attend Waldman’s presentation, leaving the confines of my kid-centric house and life to be around all kinds of different people who love to read and think about something other than soccer practice and homework! Thanks to Jeff Martin, there’s a place for Tulsans who love to read and connect.

“My dream is to get Magic City Books established and then perhaps in 2020, attempt a weekend-long book festival with dozens of authors, vendors, food and music,” Jeff noted in Tulsa Lifestyle Magazine. Now that sounds like a fun girls’ weekend right here in town!

Jeff (who is currently working on his own book of poetry) believes this Booksmart movement is greater than the sum of its parts. He wants book events to garner the same excitement as a movie or concert. For lovers of words and books like me, I suspect he is succeeding!

And, even though you may have missed Ayelet Waldman, you can mark your calendar for all the up-coming Booksmart events by visiting magiccitybooks.com/events/