Before you turn 2 you have to get a new do. The toddler mullet had some cute style options, but we finally decided it was time for a haircut. Cutting hair is not a skill I would like to experiment with on my children. When I asked people where they took their kids the most mentioned place was Q-Cuts.

Of course, I decided take them during some freak rain and wind storm, but the girls thought it was fun to wear rain boots and carry umbrellas around the house as I tried to wrangle them out the door.

As soon as we arrived there was no line. Bonus for me since taking them solo! Upon arrival they were checking the entire place out. Video games are to the left and the back has a play house filled with toys. The professional hair stylists double as toddler experts. Reese was fine with just hanging out in the airplane. Blythe wanted me to stay close and to observe every move of this process. 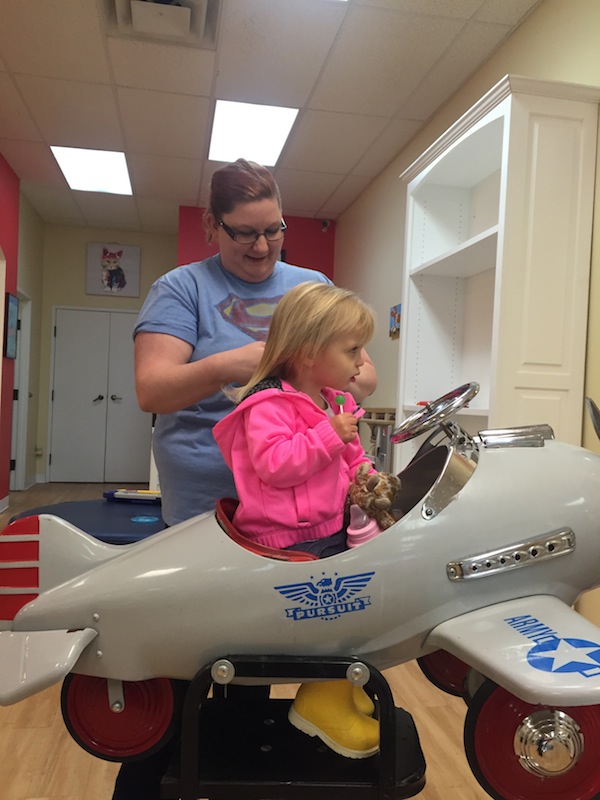 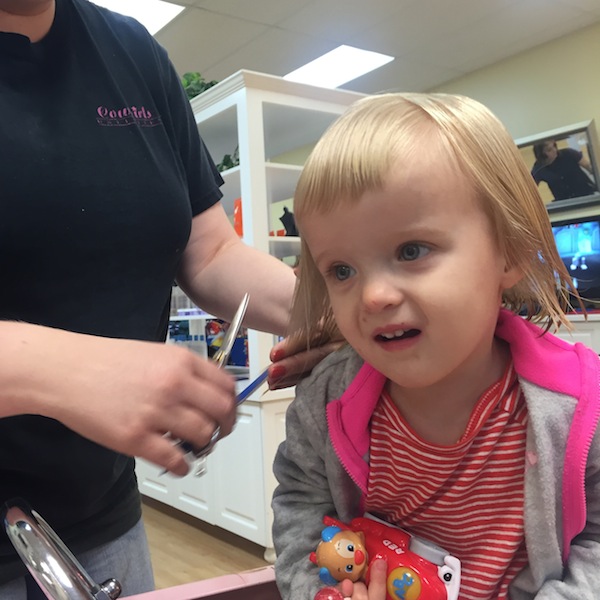 After 7 minutes both kids had transformed into toddlers with adorable bob haircuts. I will definitely bring the girls back here. They made me feel so comfortable. And when Blythe was over the whole process, they brought out bubbles, suckers and anything else in their magic shop that helped wrangle back in a toddler. 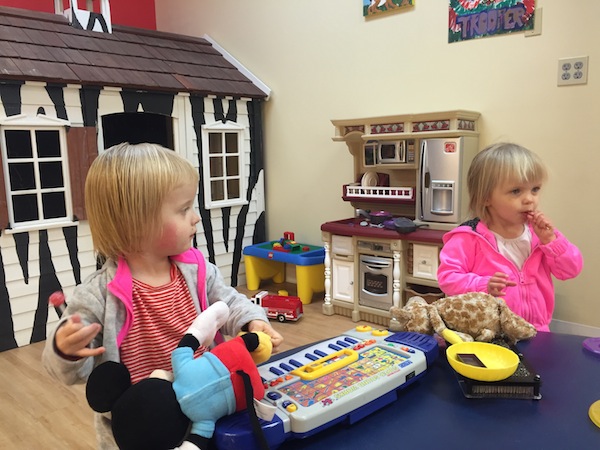 Birthdays bring the bright side out of everyone. The day of the girls’ Doc McStuffins Birthday party it was 72 degrees. The sun was shining and it made for the best day for two kids whose favorite place is “OUTSIDE.” I hear this word in my sleep due to it being spoken so often.

Lots of firsts happened at their party. The first time I met my cousin’s daughter Piper. She is beautiful and maybe the first human to give me baby fever. My brother brought home his girlfriend. Not only am I am fan I would like her to take me shopping ASAP! The girls Gammi came in town from St. Louis. The girls instantly gravitated towards her and allowed her to join in on their silly world. And my sister-in-law and brother-in-law dared to drive six hours with three kids just to celebrate Blythe & Reese’s birth. Not only did their kids rock the road trip, they made the party. 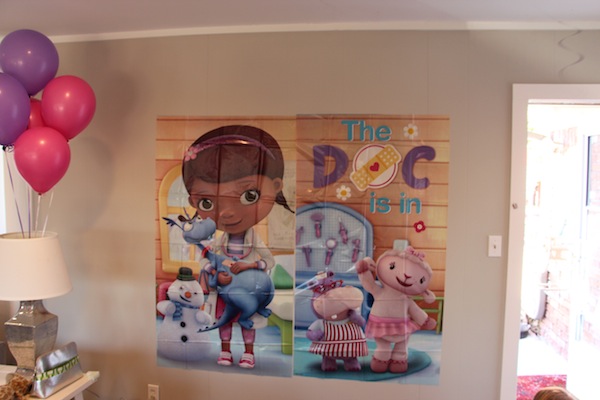 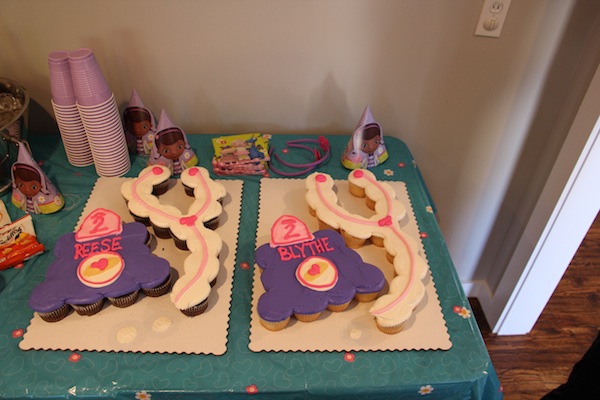 Last year the girls had a party that was true Pinterest perfection. My Aunt spent months creating the decorations. I pretty much sent her my dream party and she made it happen. This year I realized that was not something that can be repeated every year. So this year was the good old fashion 2 year old party. Doc McStuffins was the theme. Balloons, plastic table cloths, characters on the wall and bubbles. Both of my kids react to change differently. When the decorations went up Blythe had to go to each room and point to “Doc” for over an hour and wanted to make sure all these amazing new decorations were not leaving the house anytime soon. Reese just ran directly to the bounce houses and held her cousins’ hands.

I get asked often if I buy two of everything for the girls. Usually I say no. But lately this has been more challenging. At the party there were no tears until the toy of their dreams appeared – the Doc McStuffins Mobile. I had predicted this may happened. This was an instance where we did go and get another mobile since it was their birthday. On a day to day basis they say “switch” and trade back and forth the hottest toys or pieces of dirt. 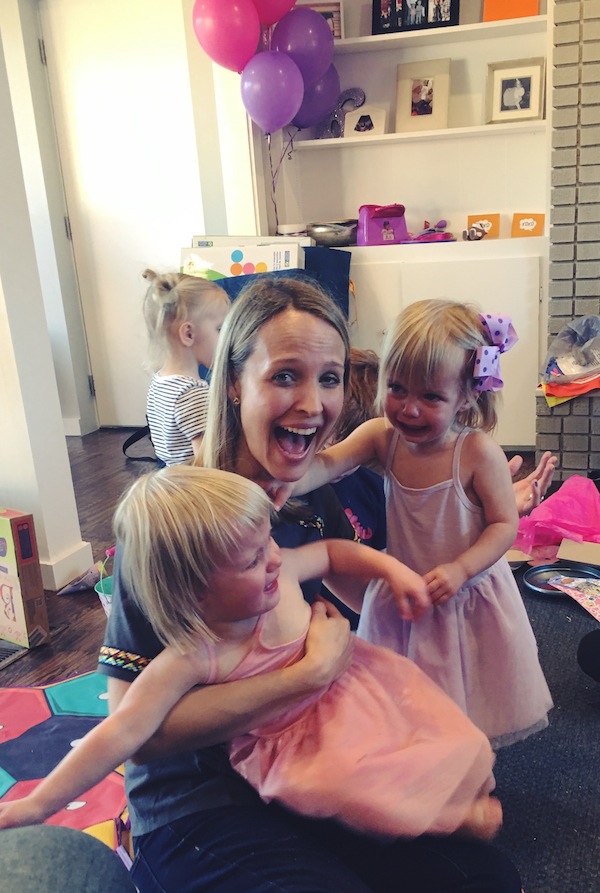 The party was filled with sugar, running and our entire tribe just getting to catch up. It does make me sentimental thinking that most of these people were at my parties growing up. Family parties are a special event and hold some of the fondest memories from my childhood. Of course it does make me miss my Dad in heaven, but I am a believer he is always close by.

To end the weekend, we had one last party. Our cousin JT turned 8. He is the most creative kid – his birthday party theme was plants vs. zombies based on an app. Each family member dressed up as someone on there. I’m not too familiar with all of the characters, but I was a cactus. 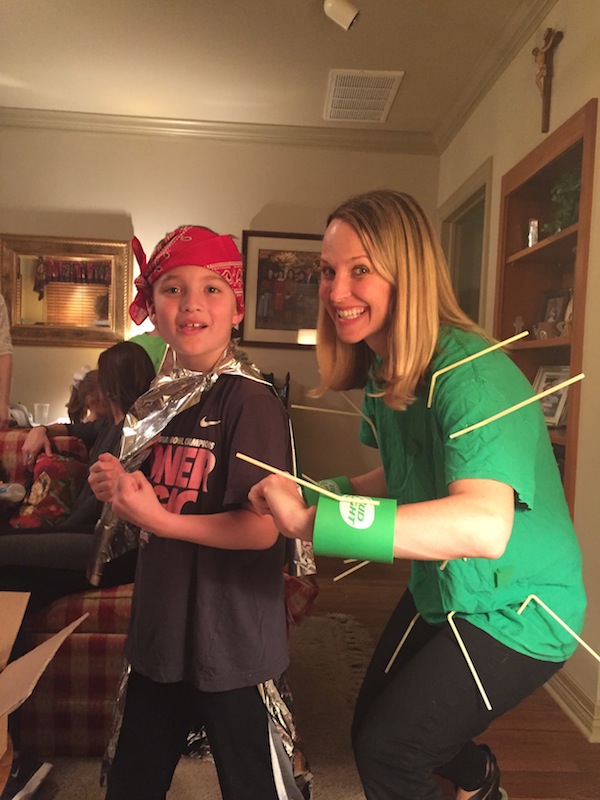 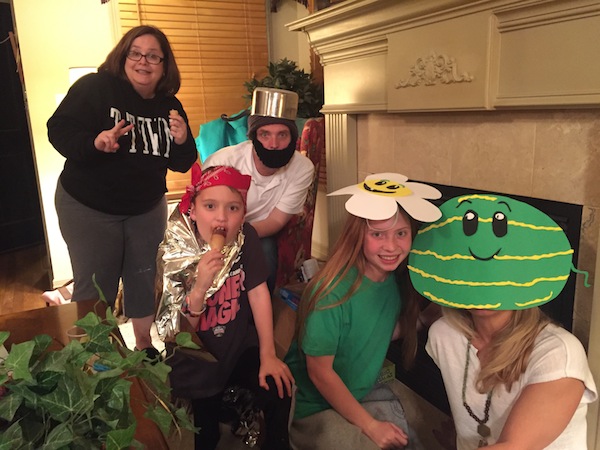 Now I need a juice cleanse from the sugar and to get ready to tackle the many thank you cards for those who have given extra love to my kids.