I think it was in the vein of “Hey! I’m not too old to try something new!” or “It’s summertime! Do stuff you wouldn’t otherwise do!” or “Sure! I can keep up with my son!” Whatever the reason, on a whim while on our epic road trip this summer, I signed up for a “Trail Run” in Park City, Utah, with my eldest. This son happens to be a genetically gifted runner (we are not sure from whence these genes come). Alas, I didn’t realize “Trail Run” is code for no pavement and lots of rocks. And hills! And it’s a 10k! I must have my Ks mixed up, because I had no idea I would be running over six miles.

All I ever really do is a half-hearted jog with my dog around the neighborhood. But we set out early Saturday morning, with PVT watching the rest of the kids while they wait for my son and me to finish the race.

And we’re off! Up, up, up a trail (hey! Where’s the pavement?). It’s hot. It’s rocky. It’s dusty. Plus, we are running in altitude, which we weenie Tulsans are not used to. By the time I reach the top of the hill – we’re not even a mile in – I am worried I will either pass out or die, and completely embarrass my cross-country running son and husband. But I keep going. The route gets a little flatter, but still rocky. I have to tiptoe around the rocks so as not to break my ankle or some other body part. I wonder how my son is doing, way ahead with the elite runners. But then something odd happens: I start to feel OK! Maybe I will survive this! Maybe this is that annoying “runner’s high” that people talk about? And while I still feel here and there like I might die, I keep going all the way to the blasted end. I cross the finish line in an hour and nine minutes….and am shocked to find that my studly running son only beat me by eight minutes! (He tried to head out too fast, apparently) And, to my total shock, I come in ninth out of 29 in my (albeit old lady) age group. Huh! So I leave, hot, tired and with a big blister forming on my foot, but I am strangely elated. Maybe I could actually be a….runner? What if I actually trained? What if I hadn’t stayed up late with one-ish-two-ish glasses of wine the night before? I am totally intrigued!

So when we return to Tulsa, I decide to do some sleuthing. Fortuitously, Tulsa seems to be a very running-happy town, and hosts a whole smorgasbord of runs in the fall that are great opportunities to run – and run with your kids! There’s the Tulsa Zoo Run on October 3, with a 5K and 10K. Then there’s the Tulsa Run on October 29, which everyone seems to rave about. It’s been going on since 1978, and there’s a 5k – and a 15k! Gulp. Siri tells me that’s 9.32 miles (clearly I’m not a runner yet — I have to convert everything to miles to know what I’m facing). And then there’s the Williams Route 66 Marathon on November 19 and 20, two days of running fun for the entire family. There’s a 5k, a one-mile fun run and a “Mascot Dash” the Saturday before the marathon, relay and half-marathon on Sunday. And, if you’re running, the kids can go to the Lobeck Taylor Family Foundation Fan Zone to create signs to cheer you on!

All of these runs actually sound sort of fun! Luckily, I have a whole bevy of run-crazy friends to turn to for advice. I always assumed they were masochistic saints, but maybe it’s not just all sweat and misery!

First I turn to my friend Povi, a running guru who is actually a running coach at Lifetime Fitness.  She is currently coaching a 5k/10k class called Lifetime Run. Does Povi have any tips for beginners? “Don’t overdo it. Increasing mileage and consecutive days of running too quickly leads to injury. Listen to your body! This is probably the biggest mistake I see newbies make.  And hydration! Especially in the summer. Hydrating doesn’t start 30 minutes before you plan to run. It should be throughout the day, every day.” Other tips? “Don’t worry about pace or speed. It should be fun and not stressful when starting out.” What about favorite runs in Tulsa? “My all- time favorite run is the Tulsa Run 15k. I love the distance, the time of year (last Saturday in October) and the atmosphere is indescribable. People are dressed up, firefighters run in full gear, and there are thousands of people lined up to watch.” 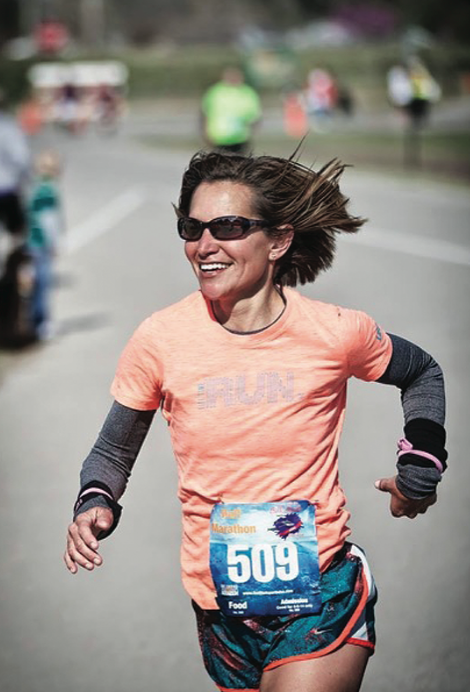 My friend Jessica has a “frunner,” a running friend who joins her at 4:30 in the morning so their husbands can get off to work at 6 a.m.  Zoinks! Her number-one rule? “No walking during my run! If I start to cramp or feeling like I want to die, I pull back! This is your body’s way of telling you to slow it down a bit. Slow down but DO NOT walk!” Jessica has been distance running for eight years and she never knows how it’s going to go until she is two miles in. “For me the first two miles are the hardest. It is all very mental and those first two miles I am telling myself that I want to be done already. When you get to this point, don’t stop! Keep going!” To keep herself motivated, she signs up for races to keep her accountable. She recently ran her first full marathon at Big Sur. Now that is a goal I can relate to — getting a sexy trip out of all that training. 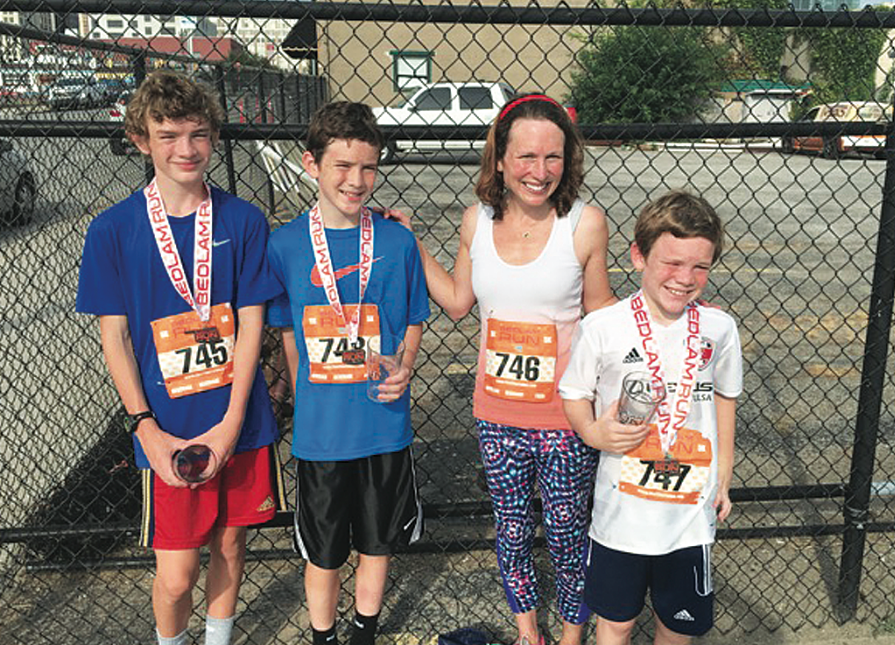 Jill with her running buddies.

Even our own Betty Casey is a runner. She has been running since college (a long, long time) and was hooked after running in the second Tulsa Run. She says, “It can be solitary – a stress release, gives me time to think and I get ideas while I’m running. It’s also social (or it is now that my kids are no longer at home). My husband and I run with a group from Starbucks at Utica Square two mornings a week — coffee reward at the end — and we do a longer run on Sat. mornings with a different group, leaving from various breakfast or coffee shops and do speed work with a group at the track during the summer up to the Tulsa Run.”  She recently ran a half marathon with her daughter and her daughter’s boyfriend – she beat them both! 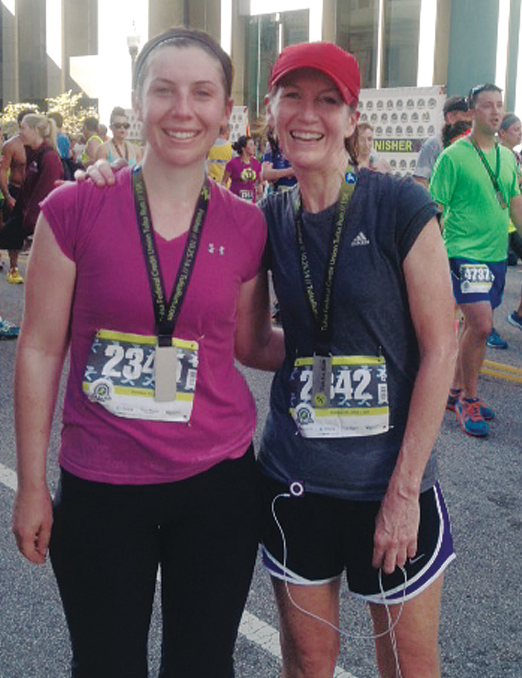 Then I talk to my good friend Samantha – our cautionary tale. She started training for the Route 66 Half Marathon with some mom friends from her son’s first grade class — all neophyte runners. They started doing 5ks and then started training for the half marathon. Their big test was the Tulsa Run. Toward the end of the 15k Samantha’s groin and hip were hurting, but she just figured it was the distance —  she was determined to finish the race. She finished, but then sat down and couldn’t walk. After two weeks she went to the doctor and found she had a femoral fracture and a labral tear in her hip! Ugh! To avoid surgery she was unable at to put weight on her leg for four months and then was put in physical therapy. Now, she is able to jog on the treadmill. Her goal is to be able to run in the relay portion of the Route 66 Marathon.  Samantha’s advice: “When you are running if you EVER have any groin pain you need to get it checked out because it is most likely something with your hip.”  So be careful ladies! 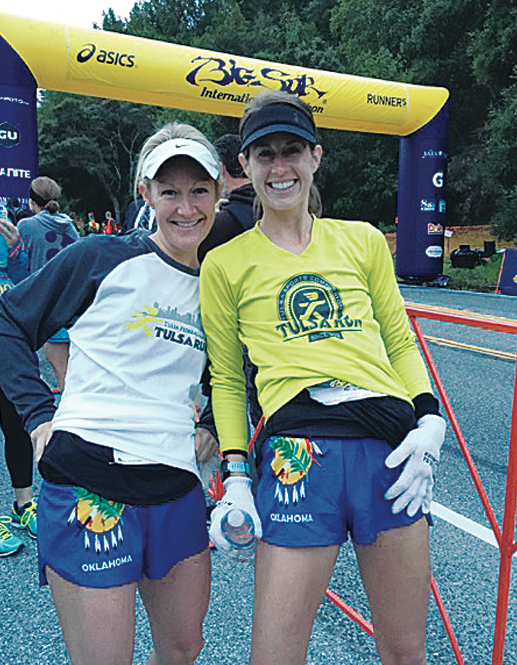 So say I want to – gulp – actually train for something like the Tulsa Run?  (Anything with the word “marathon” in it still seems too intimidating at this point in my life!)  Heath Aucoin, the race director of the Tulsa Run, points me to their official training partner – Fleet Feet Sports. I speak with Lori Dreiling, an owner of Fleet Feet who has been running for 30 years. She says  I could sign up for the “Pathways” program, a 10-week coached running program with three runs per week, which culminates in the 15k Tulsa Run.  As Lori points out, you can “fake” a 5K, but not a 15K  (or you could end up in the medical tent). She points out if you are training, you should run outside and not on a treadmill, because treadmills just aren’t comparable to pavement. Lori sees too many people who spend lots of money registering for races and then not investing in the training they will need to stay healthy and successful.  And, as Heath points out, if running a 15k is too much, you can walk it. Or, if you’ve just had a baby, try the 2k to start — this run allows strollers.

Well, I think I am going to do it. I am going to train for the Tulsa Run. I want to reclaim that feeling that I had after I finished that awful trail run. Paradoxically, it was so satisfying. Unlike motherhood, where there’s often no end to the diapering, crumb sweeping, yelling and monitoring, that run is something I FINISHED. Unlike motherhood, unlike the laundry, unlike snacks, that is something that is DONE, that I did. What a great feeling!