UGGGGGH. January. I once saw January and February, those two cold, gray, hangover months after all the holiday revelry – two months where EVERY kid in the USA gets sick with some kind of snotty or pukey awfulness, as SUCKUARY.  There really is no better description of this time of year. Couple that gray gloom with every magazine’s exhortation to “lose weight” and “feel great” and blech – it’s enough to send someone like me for a little roll in a vat of chocolate chip cookie dough until spring break.

Alas, what with all the parenting that needs to be done every other minute around here, a sugary, velvety cocoon is out of the question. So how do people find energy at this time of year? I pose this question to some mommy friends, and while I hope the answer is something sort of easy and sexy like “Mimosas before lunch!” or “A weekend at a Swiss spa!” or “Godiva in front of Real Housewives!” it is not. No! Almost all of these wise, hip, hot and healthy mommies say….EXERCISE.

No! Exercise! I have a hate/hate relationship with exercise. My idea of a workout is going out to get the mail. Or up the stairs. Phew! But I have heard about some new-fangled workout regimes that sound somewhat interesting and not like 50 minutes on a treadmill – shudder.  And, if everyone is saying exercise, well, FINE. I will give it a try!

The first stop in my exercise exploration is Tulsa Fitness Systems, a gym owned by Clint and Kara Howard. Clint and Kara are exercise gurus; Clint has masters degrees in Exercise Science and Physiology, and Kara has a bachelor’s in Exercise Science and a doctorate in Pharmacy. Despite their awe-inspiring physiques (I have to resist the urge to ask Clint to squeeze his bicep), they are totally approachable and down to earth.

Clint, a renowned fitness expert, started Tulsa Fitness Systems because of his frustration with the big gyms. “Having been in this industry for 12 years, (Kara and I) became…sick and tired of clubs and gyms where sales numbers are more important than member results, personal training standards are ridiculously poor and good training programs and qualified instruction is almost impossible to find,” he said.

Their facility is just east of the Jones Airport in Jenks. It has an urban warehouse feel and is filled with cutting-edge exercise equipment such as kettlebells, TRX Suspension Trainers, battling ropes, resistance bands, med balls, slam balls and sandbells. For the uninitiated (moi), it’s a little intimidating, but makes me feel terribly hip and in-the-know – sort of like I’m in the suburban version of Fight Club.

So we start immediately (well, I’m a little late). The solicitous instructor Tara demonstrates about eight stations that work different muscle groups. The workout is varied and fast-paced; just when you want to run screaming out of the room to the nearest doughnut shop, you get to switch to the next activity. I really enjoy the first circuit, really hate the fourth (at one point I feel pretty pukey – reminder to self: no second glass of wine the night before), but by the sixth round, I am having fun. The workout ends with some abdominal work and a final spurt of jumping jacks.

Clint choreographs three new workouts every month. By continuously changing up the workouts, your body is always stimulated – or confused — and never gets used to the same routine. This theory makes sense to me: Once your body gets used to a certain exercise, it gets “lazy” and goes on autopilot. But with this “metabolic interval training,” you should never hit that dreaded plateau. In fact, Clint says this method burns fat nine times faster than other fitness programs, if that is one of your goals (and really, it is one of mine – I’m still eating like I’m nursing a baby, but she’s been weaned for five months). 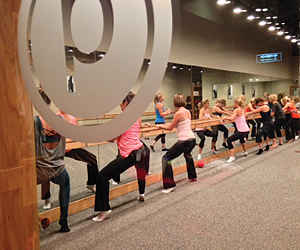 Another intriguing workout that’s landed in Tulsa is the ballet “barre” workout. There are two studios devoted to this exercise. One, called Pure Barre, is in the new mall-ish complex at 91st and Yale, and exclusively offers an hour-long barre class. The other studio, Sculpt Tulsa, is located at 43rd and Peoria and also offers “TRX” classes. In a TRX class, TRX Suspension straps hang from the ceiling, which allows you to use gravity and your own body weight to build strength, power, balance, coordination, flexibility, core and joint stability.

I’m especially intrigued by the barre classes. The origins of barre workouts began with a German ballet dancer, Lotte Berk. After sustaining a back injury, she had the idea to combine her ballet barre work with her rehab exercises. And now this “barre” workout has become the rage, particularly among actresses, models, celebrities — and us mommies who like to pretend!

So, I go to my first barre class (late, again!), figuring hey! I used to take ballet, um, 25 years ago. Surely this will be a snap, and I will impress everyone with my grace and poise. Ha! The workout is definitely more sweat than pretty stretching; it focuses on “small, deep muscular movements done repetitively, working speciﬁc muscle groups to near failure.”  Near failure? Yes! I notice the super-fit girl in front of me shaking like she’s going to collapse – and then I start shaking when the instructor corrects my movements. It is a deceptively hard workout that ends with ab work as well. I feel pretty elated at the end of the class, but the next day I feel like I was beaten up by a herd of angry ballerinas in a back alley somewhere. UUUUUUUUUUUGH. My hips hurt, my abs hurt, my arms hurt, my SPLEEN hurts. But in a couple days, I feel pretty good and get the courage to go back – and this time I feel not QUITE as bad the next day. Apparently, the barre workouts yield results fairly quickly – after 10 classes or so – and provide a lean, sculpted look. I’m channeling Uma, maybe? Or Natalie Portman? The instructors are very helpful, and will take the time to correct your movements so that you are getting the full pain – I mean benefit – of the workout. And I am relieved that not everyone looks like the principal dancer of the New York City Ballet – in fact, there are just a lot of regular women there, old, young, slim, and voluptuous. It is an hour that could easily become addicting.

And then there’s the wackiest workout of all — aerial classes! My super hip Midtown friend Laura T. alerts me to these classes given by Tulsa Living Arts downtown on Brady Street. She started bringing her energetic son to the children’s class, and now she goes to the adult class. Laura’s son Gray loves the sheer goofiness of hanging upside down wrapped in a rope. But it’s not all fun and games; it’s hard work!  The dancer/victim hooks her leg into the silk and climbs up (with a bit of help, ahem, at first), and then various poses and movements are attempted.  The silk moves one way, and your thighs might be moving another way – oy! It’s so beautiful, so spectacular, and so…fun. When I see aerial classes on the Real Housewives of Beverly Hills, I know it’s the real “hip” deal. 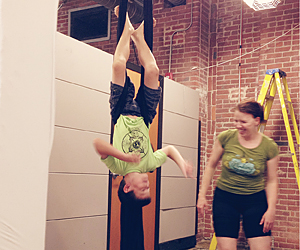 Says the teacher, Maria: “The introduction of this new element changes the dancer’s balance, center and orientation in space.”

So cheers to new ways of moving, being open-minded, and keeping our minds and bodies young, even when the routines, the occasional rut, and the household burdens threaten to age us before we’re ready.