The Hip Mom Gets Humbled

An interview with my new neighbor, a mother of nine kids who just moved here from the East Coast...while pregnant!

Sometimes I get a little smug. I think to myself, “Hey! I’m keeping all these kids alive! No urgent care visits or fecal disasters! Heck, some of them were even pleasant today!” Yes, this is a fleeting, rare feeling, but, I admit it, I will occasionally give myself a pat on the back. Well! Ha. Someone Up There definitely wants to make sure I don’t get too cocky, because just as the school year began, another family moved in to our little school community from South Carolina.

Meet The Gehrings. Susan Gehring, matriarch of the clan, was pregnant with her ninth child when she moved halfway across the country (she now has a 6-month-old edible butterball, Hudson). Friends, Susan is chill, put together and even maintains a running regime. Her girls have combed, detangled hair (mine, often, do not!). Her kids range from 16-year-old Doyle all the way down to baby Hudson, and alternate boy, girl, boy, girl. Every time I passed by her this year at school pick-up time, I tried not to stop and stare. How does she do it? An entirely new school, an entirely new state, and an entirely new baby? So, just to satisfy my creepy celebrity stalking craving, I asked for an interview — and Susan graciously granted my request.

HM: So. You were living in South Carolina, and your husband, Josh, tells you he’s going to interview for a job in Oklahoma. What did you think? Were you pregnant yet?

Susan: Yes, I was pregnant! And my first thought was, “Who is going to drive the soccer carpool on Thursday if you’re gone?” I really didn’t think much about it at all; I was just preoccupied with life! I didn’t know much about Oklahoma at all, except that it touched Texas. I had lived on the East Coast all my life. I guess I didn’t really take it seriously! But then he came home and was really interested in the job and moving here.

HM: So how did you come to the decision to uproot?

Susan: Well, we were struck by the cost of living — we could afford to buy some land here and  build our dream house. And we could do that and also send our kids to Catholic schools, which was a priority for us. Then I spoke to my mother, who travels a lot for work, and she wasn’t really thrilled with Oklahoma. But she decided to make another visit, and had a much more favorable impression than she had remembered from her travels in the past. (HM: Oklahoma does grow on you…) In fact, she liked it so much, my parents will be moving here, too!

HM: Wow. And then you had to be a solo pregnant mom with your house on the market for many months — Josh had to move here first to start his job. How did you do that?

Susan: Luckily, Josh took the dogs! We had our house on the market, and my oldest son was on a traveling baseball team. So on the weekends, we had to get up early and leave a neat house in case there were any showings. (HM:  I think I would have had an aneurysm…..) My oldest daughter Addie had a great idea: Everyone slept on top of made beds in their clothes, with their shoes ready. So when we rolled out of bed in the morning into the van, we’d just have to smooth a few bed wrinkles. And then we were off in the van traveling to baseball tournaments! We traveled with my crockpot; no one wants to eat out after long days on the road, so I packed freezer meals to heat up in hotels. (HM: Genius!  I should get those recipes…?! Why didn’t I think of a crock pot as a traveling asset!)

HM: And how did you decide on your house here?

Susan: Josh’s company offered to fly me to Tulsa to look at houses, but how could I leave? I couldn’t clone myself to take care of everyone! Luckily Josh and I have moved several times, and he knew what we both wanted. So he bought 11 acres and a house where my parents will eventually live. We’ll build our own house on a separate parcel of the land. (HM….could I buy a home sight unseen? I am not that gutsy!) And right now it’s great. I can go for a run while being in view of the backyard; if a kid needs something, they know just to wave (but changing channels or opening granola bars is not an emergency!). (HM….now that is a cheap gym membership!)

HM: Was there any difference between giving birth here versus back east?

Susan: Well, I really wanted to use a midwife in a birth center. A couple of my kids were born that way, and that was my preference. But I moved here too late in the pregnancy. I guess in Oklahoma it’s a law that you have to have a hospital birth if you move here and are past 20 weeks or so (HM:  Huh?  Weird state!). But then I ended up having my first C-section with this baby, so it all worked out in the end.

HM: What do you love most about Oklahoma?

Susan: By far the people, the sense of community. I haven’t felt that before. People here are so welcome and genuine. (HM: I agree! This place is overflowing with neighborly love. You don’t realize it until you arrive – or leave!)

Susan: I miss being close to the beach! We were an easy 30-minute drive from the beach. It’s hard to get anywhere like that around here. And I miss being able to drive so easily to see family, too.

HM: What advice do you have for moms who have far fewer children, or just younger children?

Susan: Have lots of kids! Seriously, they take care of each other. The sibling relationships are so beautiful to see. And that’s another reason it was so easy to move here: they left friends back east, but they are each other’s best friends. They always have someone to play with; it’s a built-in tribe. And the older ones are great babysitters: Hudson just adores Doyle, and Cammie (11) can take care of the baby as well as I can! (HM: I need to give birth to a teenage girl!) 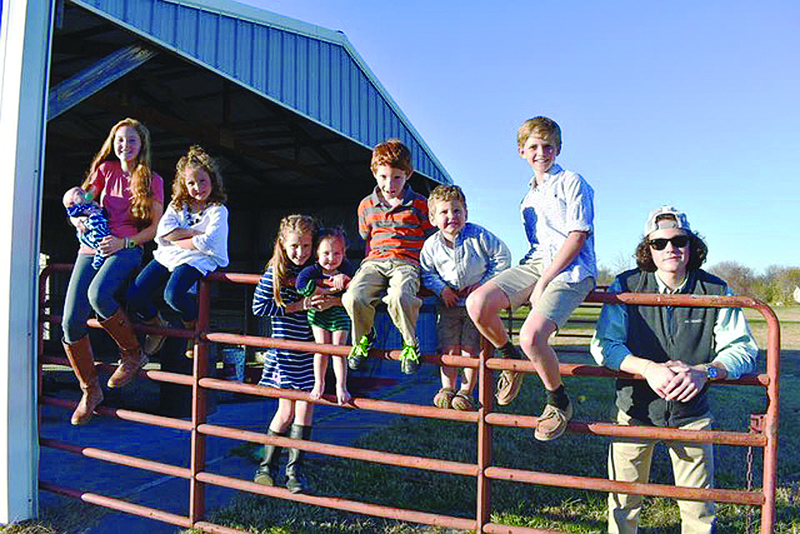 Well, friends, there you have it. Take this issue, and if you see a petite bundle of energy with curly hair who looks like a teenager with an adoring entourage, ask for an autograph. You’ll say you knew her when. And also? If you feel amazed, awed, and slightly bewildered by this intrepid, savvy mother, remind yourself, as PVT reminded me: “She is a great mother. You are a great mother. Her kids need her; your kids need you.” I think all we mamas need to hear that reminder sometimes, yes?