Tulsa has many options for those looking to exercise more in the new year.

Ah, January. The grocery store headlines are exhorting you to hit the gym, get in shape! Well, blech! Such drudgery! What mom who is already serving her penance in diaper duty and allergy screenings can forego even eight minutes on the couch with ice cream and reality TV? Well, a confessional: As a former big-time hater of the slightest additional movement beyond what kept me and my offspring alive, I’ve discovered that just a bit of exercise is actually sort of invigorating —  and moving all the stuff keeps it from freezing over. I don’t think exercise is going to necessarily make you lose weight (that just involves a lot a celery and tears), but it will sure make you feel a lot better about yourself! I’ll never be an ultra-marathoner, but just a bit of conscious movement helps lift my mood.

So, if you’re one of the ladies who wants to try to exercise more in 2018, I say go for it. It’s a great time to work out in Tulsa. There’s lots of new, hip places to try — so hip that you may need to show up to some of these places from time to time just to maintain your street cred. What’s even more fun? You will probably need to go shopping to get some swanky “athleisure” wear to swan gracefully from the carpool line to your chic workout venue to Trader Joe’s, all while looking cool as a cucumber.

One up-and-coming, uber-hip spot is Press Cafe X Yoga — just opening as this issue goes to press at the beginning of December in the Archer building in the Tulsa Arts District. It’s co-owned by Brady Ballew, a Tulsa Roughnecks soccer player, and Claire Spears, a Tulsa native and yoga guru. Press Cafe X Yoga offers heated vinyasa flow. If you’ve ever done a hot yoga class, well, it’s a special kind of bad-arse yoga. Press’s experienced teachers build classes in a way that students of all levels progress when they consistently come to class. And the best part? After you sweat your toxins out, you get to retox — The Press Cafe serves beer and wine!  (And also coffee, tea, smoothies and local baked goods.)

What to wear to Press? Anything you want, of course, but both Claire and Brady are Lululemon ambassadors. Claire says, “We are also using Lulelemon mats and blocks in the studio. I love the way I can move in the clothes, and how the clothes breathe and feel — especially in hot classes. Also, their casual wear makes going from class to coffee easy.” 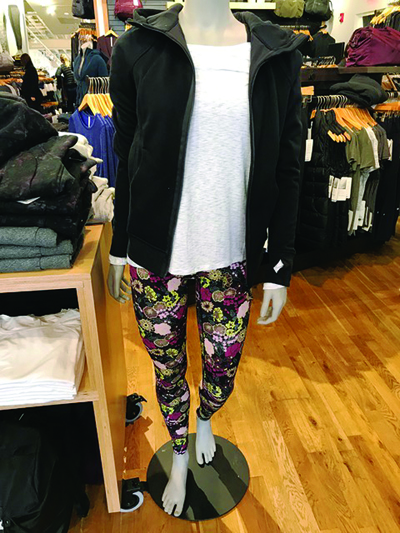 For hot yogis (or non-hot, too) who prefer years of experience behind their establishment, try Yoga Quest at 31st and Harvard. It’s the original hot yoga studio in Tulsa and has been heating up bodies for 17 years.

You’ve probably heard of barre classes, too, such as Sculpt Tulsa – “The Best Lift and Tuck in Town!” – on Peoria is one of a handful of spots offering this unique blend of ballet barre work and pilates. Barre workouts originated when a German ballet dancer, Lotte Berk, sustained a back injury and during time rehab, she combined her ballet barre work with her rehab exercises. The workout gained celebrity devotees on both coasts, and now even little old Tulsa has Barre!

Barre routines consist of small deep muscular movements, done repetitively, working speciﬁc muscle groups to near failure. I’ve tried barre classes, and I thought since I wasn’t running my buns off I wasn’t doing anything – until my legs started quaking and shaking! That’s what they’re supposed to do, as weird as it feels initially.

My lovely and sculpted friend Cetina teaches at Sculpt Tulsa. Cetina always floats nimbly from teaching classes to the pick-up line, so I asked where she gets her athleisure looks. She shops at Lululemon, Nordstrom.com (their Zella brand is one of her favorites), and a new-to-me website, Carbon38. Oh my. If you suffer from occasional low self-esteem and inner-thigh hatred, this website is not for you. It is full of lean, golden goddesses with perfect abs and glittery mesh leggings. Launched in 2013 by a pair of lithe and brainy goddesses, Carbon38 has grown by double digits and now holds a huge chunk of the “athleisure” market. Check it out — and then get yourself to a barre class! 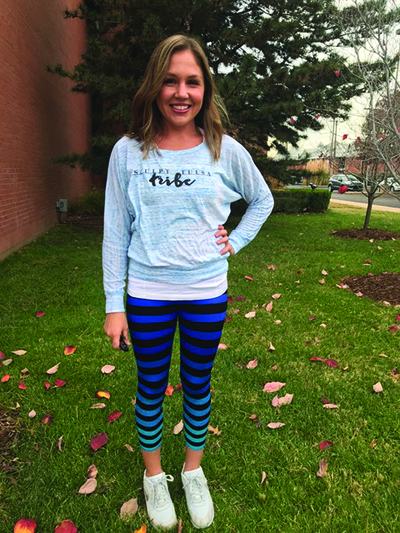 Oh, but there’s more: Studio Pop is a heartbreakingly hip new gym near Driller’s stadium. And it combines all the coolest things: Buti Yoga (yoga with weights?!), cycling with core – terrifying stuff. Or Orangetheory on Cherry Street might meet your workout needs. I tried Orangetheory, a hardcore workout with 30 minutes of various forms of cardio (running on treadmills, rowing machines) and 30 minutes of weights. The workouts change daily, so you never get bored! You have to wear a heart-rate monitor so there’s no cheating — I learn after my trial class that the goal is to stay within the “orange zone” to achieve maximum results, which I didn’t quite achieve. Alas.

For those of you who aren’t sure what your favorite workout might be (and are thinking of bringing family members into the mix), Sky Fitness is a good choice. No excuses. If you don’t like yoga, you can do weights….you get the idea. Or a family membership to the YMCA or YWCA could get you all off the couch.

Or maybe you’re in a stage of life like me – right now all I can do is roll out of bed at dark thirty a couple of times per week, throw on a ragged sorority sweatshirt, and jump around in front of some online thing. It’s all good! Just move a little bit.  Remind yourself that despite all the kids, carpools and booger duty, you can still shake it.