Before we get to the Halloween dinner ideas, I have a confession to make. I completely ignored the Unprocessed October Challenge this weekend. I went to Dallas to visit my son and to Austin to visit one of my daughters, so I wasn’t picky about my food intake while I was gone. Tex-Mex, bring it on! Home Slice Pizza — yes! (actually, I had a salad at Home Slice in Austin, so that was okay). Salt Lick BBQ — yes, please! The picture below is what I ate at Salt Lick. 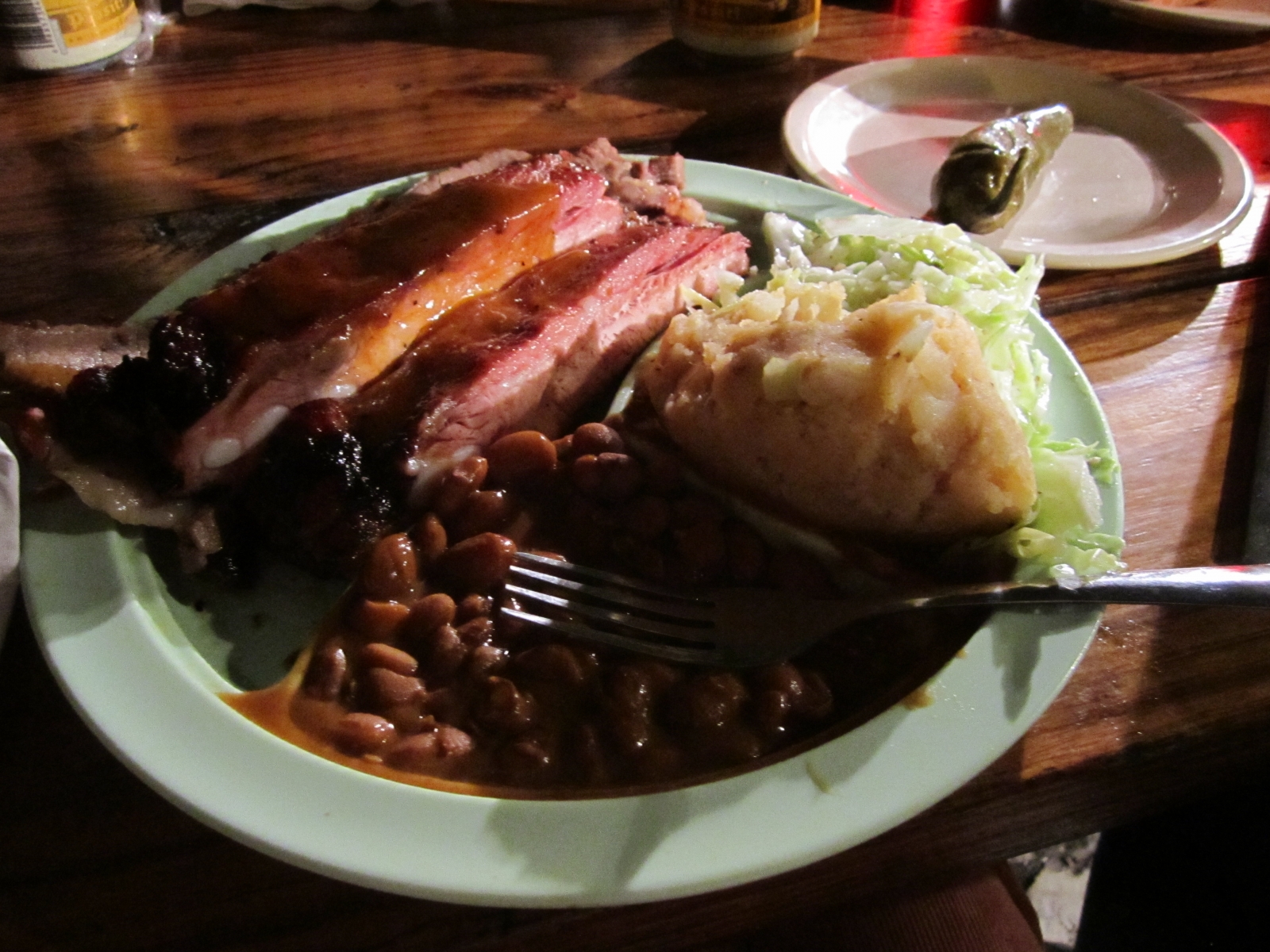 Maybe it was unprocessed. I don’t know…It was good.

Let’s leave the weekend of eating behind and move on to Halloween. I have some fun food that you can make for your kids or with your kids. These ideas would be great if you’re having a Halloween party, or just want to make a fun dinner before going out trick-or-treating.

These foods do not involve sugar or candy, but they’ll definitely feed your kids’ imaginations. And you can make them in no time! 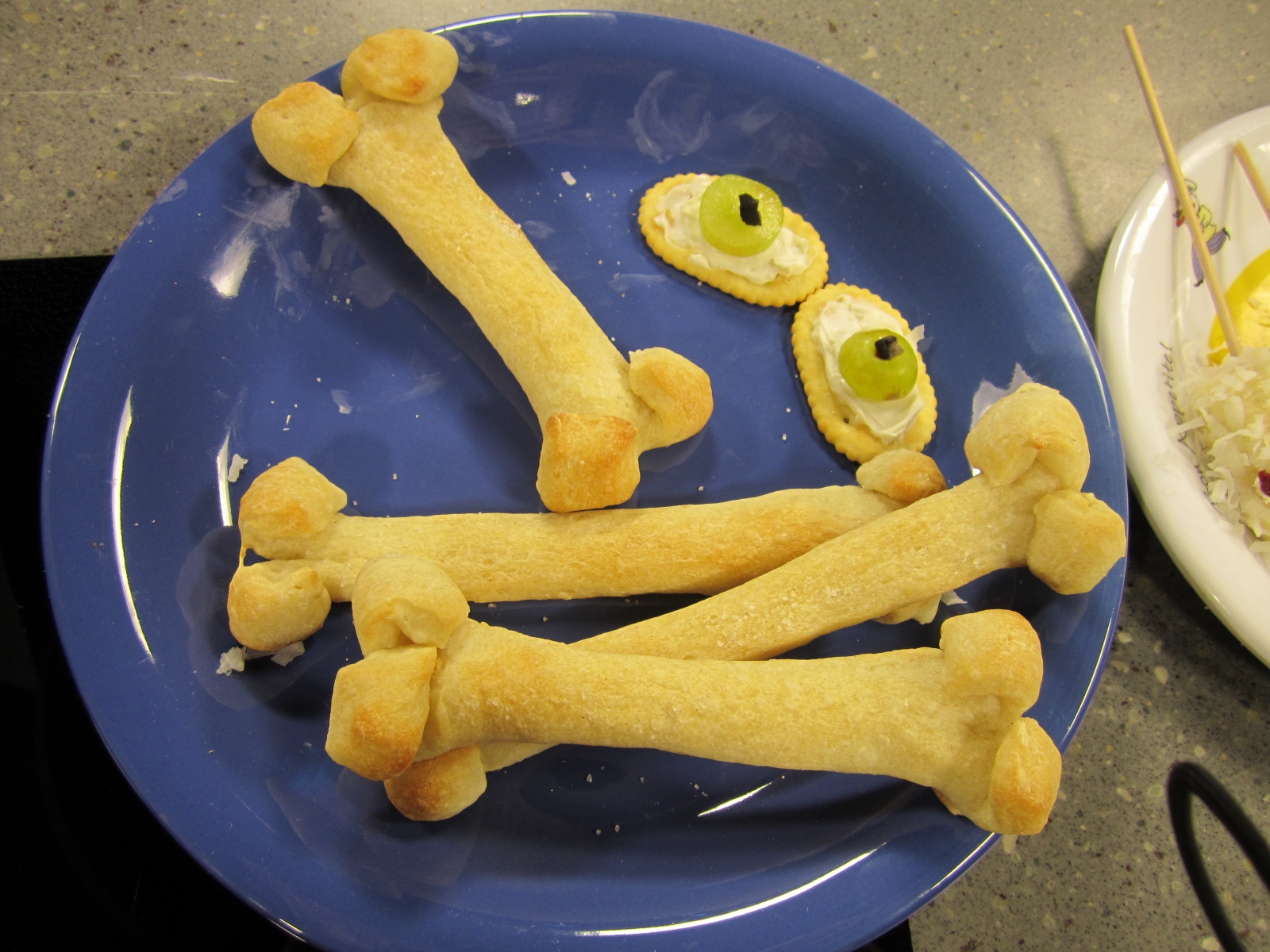 The SKELETON BONES above were made using refrigerated breadstick dough — the kind in a canister. Instead of twisting them as the directions say, take the rectangle of dough, put it on an ungreased cookie sheet, stretch the dough slightly, so it’s longer, then use kitchen scissors or a knife to make about a 1-inch slit in each end. Fold the tabs of the ends up, making them into a slight ball (see photo), so that they look like the ends of bones. Put them in a 350 degree oven and cook until golden — about 12 to 15 minutes.

The EYEBALLS, next to the bones in the photo, are made using crackers, spread with cream cheese. Use half a grape and a piece of black olive, raisin or craisin to make the rest of the “eyeball.” Use your imagination with this. You could spread the crackers with peanut butter and use banana slices or marshmallow slices for the eyes, finishing off with raisin pieces or tiny chocolate chips in the middle. Other spreads to use might be different flavors of cream cheese (pink eyes would be cool) or Nutella.

I think these bones would be great served with spaghetti (red sauce, of course) or sticking out of tomato soup. Or is that too gross? Of course, a little ketchup on them could be really attractive.

The other two fun food ideas are super easy to make, too. The first one is a BANANA GHOST. To make the ghost, just cut a banana in half, poke a popsicle stick in the flat end, roll the banana in coconut and add eyes made of half a raisin, small chocolate chips or dried cranberries. You may have to push the coconut and the “eyes” into the banana a bit to get it to stick. Or you can put a little lemon juice on the banana before you roll it in coconut. If you want it to be a little more decadent, you could mix some spreadable cream cheese with a little powdered sugar, cover the banana with the mixture, and then coat it with coconut. 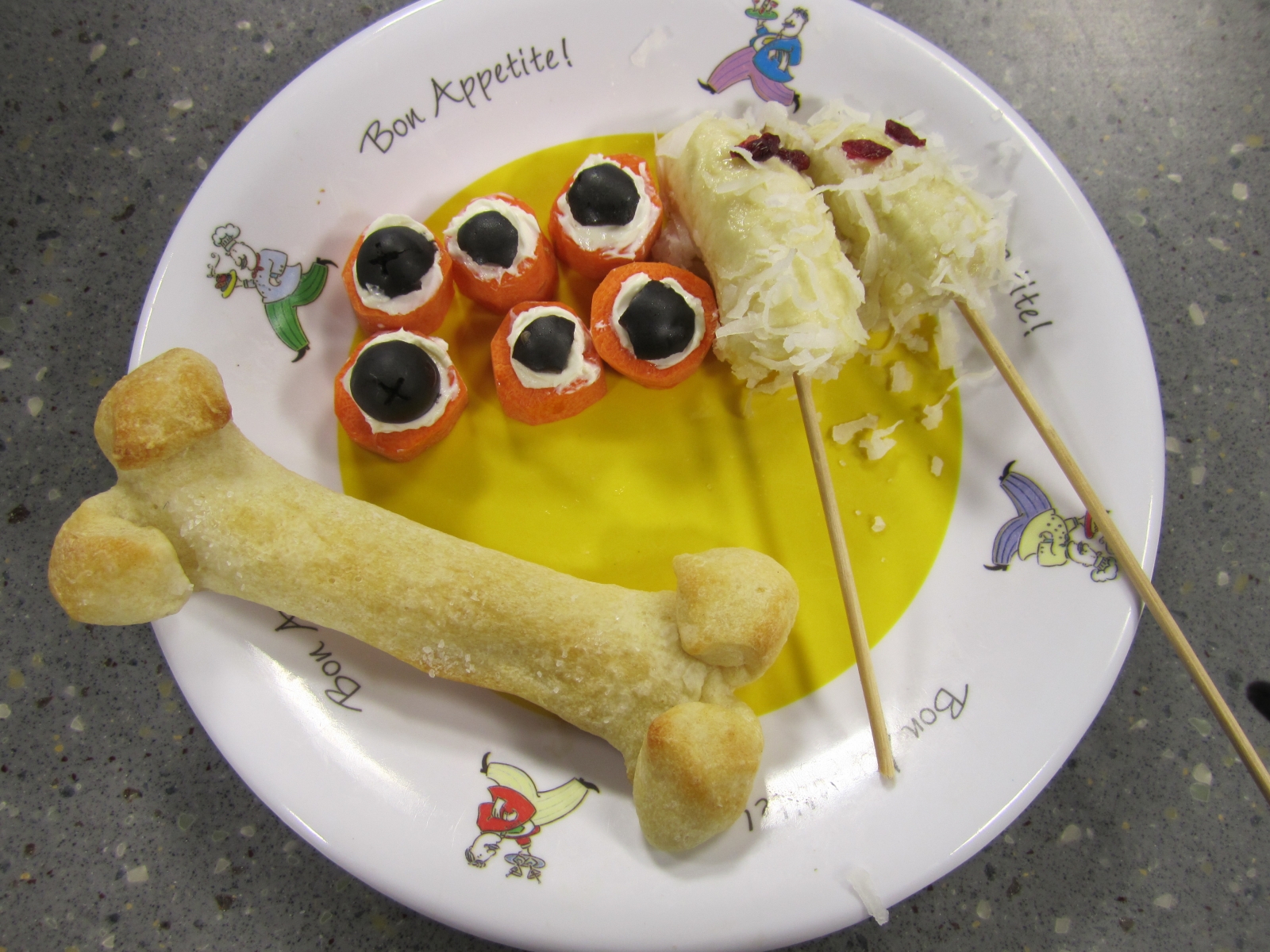 The little ghosts are on the plate photo at the right.

Also above, you’ll see some ORANGE EYES. These are made by cutting a carrot into approximately 1-inch slices. Top them with cream cheese spread, and then with a slice of olive (black or green) or a slice of grape. MMMM. Crunchy eyeballs.

Have a fun and safe Halloween, and watch me every Tues. morning on KTUL Channel 8 Good Morning Oklahoma for food, parenting tips and more!