Peroxisomal Disorders are terminal and affect families all over the world; GFPD, headquartered in Tulsa, offers resources and support to affected families.

What if the day your child was born the doctor said, “Something is seriously wrong with your child”? What if it took 3 years for a correct diagnosis? What if one day you found out your child has a terminal  illness? What if today was your child’s last day on Earth?

Over the weekend, these are the questions that came into my mind like a series of waves. I had one of those opportunities this weekend to meet a group of individuals that have changed me for the better.

I have the pleasure of being on the GFPD board. GFPD stands for Global Foundation for Peroxisomal Disorders. This organization is made up of members from all over the world. There is a scientific board and a general board of directors. As a member of the board, I am one of the two individuals who does not have a child affected by this disorder.

I found out about this organization through Melissa Bryce Gamble. As Melissa and I like to say, we share an Uncle. Her daughter Ginny was diagnosed with this disorder. It took years for her daughter to have a correct diagnosis. Ginny is now in heaven, but Melissa has made it her mission in life move the GFPD organization to one of the top in the world. 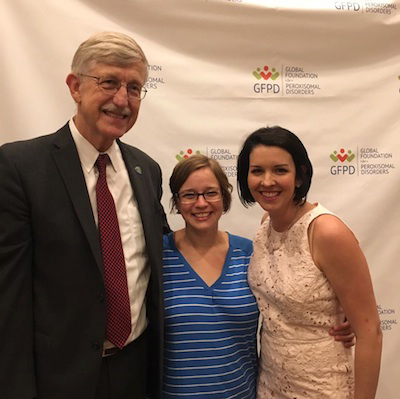 Dr. Francis Collins, director of the National Institutes of Health, Heidi, a board member and parent of a child with the disorder, and Melissa Bryce Gamble

Now you might wonder, what can a person like me add as a board member to this organization? Well, I asked myself the same question. The board is filled with parents on the front lines of dealing with these disorders. The scientific advisory council feels like I am in the room with Albert Einsteins and the most intelligent  individuals I have ever met.

But I never used my communication skills when Ginny was alive. I am one of those individuals who froze. I would think about Melissa and her family non-stop. I would ask my family about them, but why did I not reach out more? Why did I not make an effort to go and play with Ginny? Yes, she had a terminal illness, but she was a child. Yet I had never known anyone with a terminal illness so young. Today I realize that made me nervous. I was afraid to say or do the wrong thing. But who am I to worry so much when the basic needs of individuals are universal, despite a terminal diagnosis?

Looking back, I regret not jumping on board to help honor Ginny by spreading awareness and raising funds for research. Fortunately I can still honor Ginny and her family now.

For the past year I have read about families affected by PBD  who live all over the world. There are various effects to these diseases. Some show signs at birth, and often babies die quickly from these diseases; sometimes they are never diagnosed. The faces of the GFPD children are all unique. 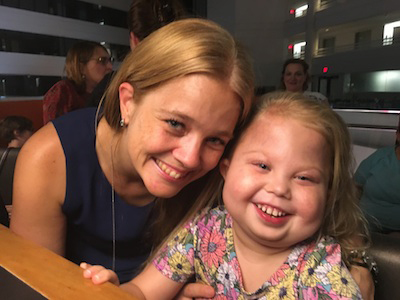 Every 2 years, there is a family and scientific conference. Families drive and fly into DC from all over the world. One family I met drove 12 hours from Canada. A father flew from the Netherlands but chose to leave his child at home due to the long flight.

The majority of the families found the GFPD by joining the online community. GFPD provides support to families, funds research and creates awareness. I heard two families introduce themselves and mention how it was finally nice to meet in person. But they had been speaking for months online and on the phone to provide support to each other.

There was a heart on some of the nametags. This was a way to show that this individual had their child in heaven already. The families who attend are a mix of stages with these diseases. Some families received their child’s diagnosis in the past year; one family has the oldest child at the conference who is 35, and one family had 2 affected children with these disorders.

From the moment I arrived at the conference, my heart was melting. The environment that is set for the doctors, families and volunteers is one of amazing energy. If people were new to the conference, they were welcomed to tell their story and would feel the warmth of the GFPD at that instance.

The eyes of the parents tell so much. When they would describe their kids to me, their eyes would shine. And then a moment later I would hear someone describing how their child is having a year of major setbacks. And those shiny eyes turn into eyes of compassion and then fear.

One family has a sibling who treats her sister like she is the most “normal” person she knows. This sibling sings, fixes hearing aids and looks at her sister with honor. She plays with her yet realizes when she needs to step back.

Doctors would walk up to these children and give huge hugs and love on them as if they were their own. 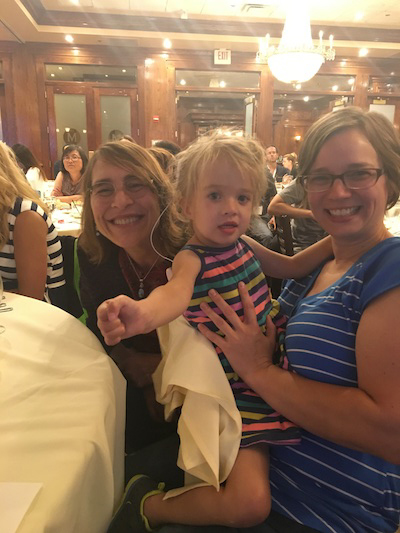 One of the doctors, a child, and mom.

During the weekend I got to sit in on some group talks.One of the sessions was regarding what stage of grief you are in.  I listened to stories of school districts that have created new programs so a child could get an education and socialization. I heard heartbreak of parents not being heard by doctors and major medical mistakes that would set back their child’s everyday health.

I asked the group a question I just had to know. My question was, “How do you want people to verbally support you? or “How do I ask about your child’s condition or state of health in the least-offensive manner?”

Everyone responded with the same answer, “I do not know.”

One Mom told me how her extended family still believes her daughter will just grow out of this illness. A Dad told me how his friends usually just do not even ask anymore and have become very distant.

The best room to walk into at this conference is hands down the play room. The GFPD has the most patient and hard-working volunteers. But in this room the volunteers truly shined. This play area is planned with love, creativity, and FUN!

Just picture the most fun room for any child to ever see in a hotel. There are ball pits, play doh, games and the most engaged volunteers. Each child has a packet about themselves, so the volunteers know the child’s likes and dislikes if they get fussy. In the halls I saw volunteers taking some of the more mobile children on walks. No doubt the child requested these walks, and the volunteers were thrilled to say yes. When I asked one of the kids if they had fun in there, they got so jazzed and quickly exclaimed, “YES!” 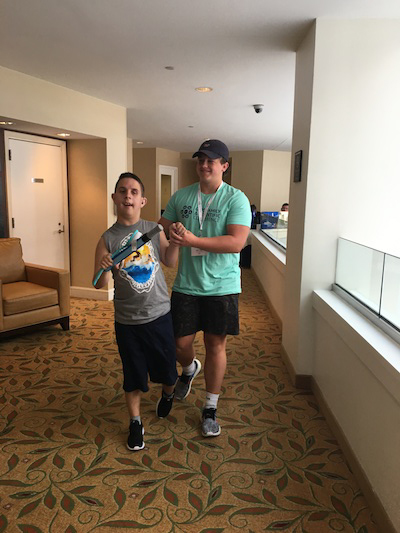 A child who has this disorder taking a walk with a volutneer who goes to high school in Tulsa!

When I went back to my hotel room each night I would reflect on everything I learned from these families. The way they love these kids is something fierce. These parents are their number one caretakers, supports and advocates with doctors. They are the ones who have to emotionally support these kids and never forget their child has a clock ticking against them.

And as a resident of Tulsa, I am so proud to call Melissa a local. She is running an international organization that is researching, supporting and advocating. All while being a Mom and Wife!

After this conference I now know what I can do to help this organization. I hope I can have each person reading this to do one or all of these 3 items:

When a Mom asked another Mom who lost a child from this disorder a few years ago, “What can I do now with my affected child?” Her response  was, “Hug and hold them non-stop. That is what I miss most about my child being in heaven.”

So to all of you who have a child, grandchild, cousin or babysit someone special to you: Give them a hug and let them know how much they are loved.

For more information about GFPD, watch the following video from their YouTube channel: