Getting Ready to Ring in the Newb Year

I don’t know what it is about New Year’s resolutions, but you either love them or loathe them.

They’re kind of like affirmations. Some people embrace them wholeheartedly, filling their Facebook feed with all kinds of motivational quotes and updates, while others among us find them annoying.

I think for me it’s partly because they can seem a bit forced when I take them on and partly that idea of putting a lot of high expectations on myself after I’ve just made it through the pressure cooker of the holidays just feels like a recipe for disappointment down the road.

At the same time, I get why people love them. It’s kind of like how running is a psychological sport. Some people do really well with personal challenges to exceed their own expectations for themselves.

I am not those people. I’ve found that as much as I enjoy the pressure of a good writing deadline, I tend to thrive and succeed when I give myself plenty of wiggle room to be creative outside of set boundaries.

But believe me, I’ve had my share of New Year’s resolutions over the years. For most of my twenties and thirties, I was the queen of Bridget Jonesing myself into unrealistic expectations.

As a relatively short woman, I’ve always struggled with a hobbitesque physique that requires me to watch what I eat with an eagle eye even when I’m hitting the gym. Every year, invariably, I tried to outpace the atomic clock of personal disappointment by committing to lose weight by forcing myself into a rigid lifestyle of calorie counting and exercise. I might lose five pounds here or there, but pretty quickly I would end up burned out from fixating on my health.

The same pattern followed my resolutions to write daily, keep a journal, read more often, be more organized, keep a cleaner house, write letters, and anything else I resolved to do over the years.

In my thirties, I decided the Way of the Resolution was not the path for me, and I happily began ringing in the new year with no expectations and most importantly, no pressure. It was glorious. Instead of a bullet journal of unattainable goals, January held only after-Christmas clearance sales and an empty calendar month for catching up on my binge-watching.

But I’ve always loved making lists, and one day out of nowhere, I sat down and used my pretty pastel mildliners to make a no-pressure list of a few new things I wanted to try someday:

I didn’t set a timeline for any of it. I simply taped it to the wall and let it breathe like a bottle of wine. Having the list there gave me a constant reminder of some things I had always wanted to do without requiring anything of me. It was always kind of there in my mind but in a weightless sort of way. I wanted to let everything happen organically, allowing myself to drift with the current of the universe until I found myself in the right nebula to cross an item off my list.

1. Take the Kids to a Football Game.

The first two items came across my desk as memos while I was working at the school. The first football game that came up, I made a point of prioritizing it.

Going to a football game might not seem like a break from the ordinary for most folks, but it is kind of a big deal because no one in our family comes from “sports” people. My family didn’t follow football or sports of any kind, and neither did Justin’s.

One day when Arthur was really young, he complained to us about another kid in class who only talked about sports with the impatience of a person who not only didn’t care about sports but also had no tolerance for anyone who would be bothered with such a trivial interest.

I found his reaction a bit alarming. It’s always been really important to me that my kids appreciate others’ interests even if they don’t share them. I don’t want to raise people who say things like “Country music/rap/pop music sucks” or think they’re too cool for something just because it’s mainstream.

Although I’m embarrassed to confess it, because I don’t know much about football, before we went to the game I took some time to read up on the basics of football and its rules. It’s hard to be a newb, but I was committed.

During the game, I tried my best to get the kids excited about “our team,” and they loved it. Now, they look forward to a chance to go to a football game. They’ll tell people, “I’m not into football, but it’s fun to go to a game.”

The next item was more convenient but just as hard for me. The school I worked at was hosting a blood drive, so I didn’t have far to go…at least, physically. The psychological journey was a whole other ball of wax. I have a mild to moderate phobia of needles that had armed me with a readied arsenal of excuses to not donate blood in the past: “I have to do laundry”; “It’s too cold outside”; “I had a mild headache at 6 in the morning that could come back”; etc. But here I was with a blood drive at the school and an item on my list. Just check off that item, I told myself.

And so I did. I was super woozy when I stood up afterward and had to be escorted back to class by a couple of seniors, but by gosh, I did it, and it felt awesome to maybe be saving a life.

I was embracing newbness and knocking out items like a pro. Two down, two to go.

It wouldn’t be long before I had my chance to check out my first convention, Tokyo in Tulsa. It was just as amazing as I hoped it would be. These days, our family is well on our way to becoming seasoned conventiongoers. 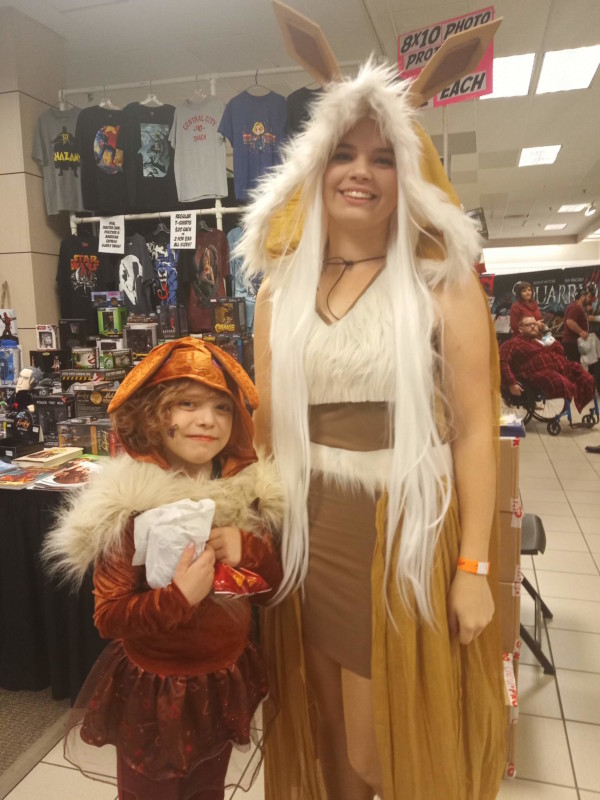 The last item was a bit harder. Dungeons and Dragons isn’t something you can really just Google and then start to play. Justin gave me a Dungeons and Dragons Starter Kit, which came with a mysterious and magical set of polyhedral dice like I’d been coveting for years, but reading through the information I had only confused me further. It became immediately clear that I wouldn’t be able to sit the kids down with a rulebook and wing it. 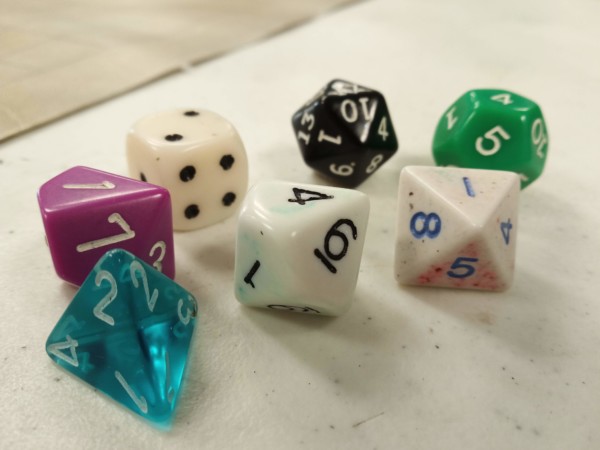 But I wasn’t about to force anything on my list into place. Instead, when the subject of D and D came up, I would casually drop that we were looking for a DM to show us how to play.

This item took the longest of any item on my list, but eventually, we met a group of amiable folks playing at the Name Your Game Expo. Despite my efforts not to appear too needy, I may have launched into a shamelessly awkward monologue about how desperately I’d wanted to play ever since I found out that Pat Robertson was mistaken and the game was not a portal to devil worship but instead to delightfully nerdy fun, and that we’d been looking for a DM for ages and I promised my kids could handle playing with adults.

The DM took pity on us and invited us to join his weekly game at Game On Nutrition next to Wizard’s Asylum. Lucy, Arthur, and I have been playing every week for a couple of months now. Lucy is a half-elf sorceress named Elirk. Arthur is Bell Cranel, an allusion to an anime he likes called “Is it Wrong to Try to Pick Up Girls in a Dungeon?” I’m a white-haired halfling rogue named Lunabe, pronounced Luna-Bee, an anagram of Nebula. Lunabe might be small, but she’s fierce when it comes to interrogating thieves.

Whereas resolution lists made me feel claustrophobic and overwhelmed, the Newb Year’s List has enriched my life profoundly. Now that I’ve finally crossed all of my items off, I’m ready to be a newb at something else. Maybe I’ll try a new art form. Maybe I’ll learn the choreography to a music video. 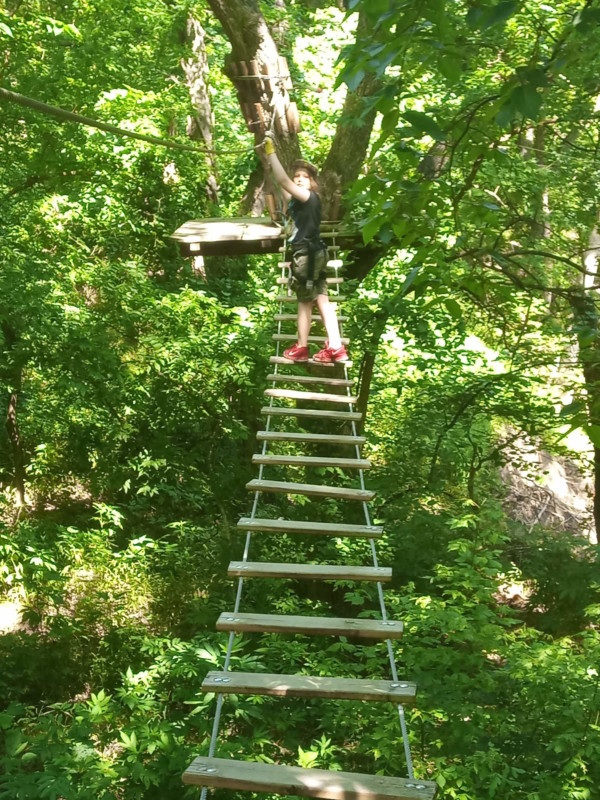 When we were newbs on a ropes course

If New Year’s resolutions are totally your thing, that’s awesome! I would love to hear about what yours are for the coming year. If you’re like me and they’re not working out for you, though, you might try giving the Newb Year’s list a spin.

The key is to keep it down to a few manageable but challenging items and don’t put too much pressure on yourself. You don’t need a deadline. If you don’t finish it this year, that’s fine. Just roll over your items to the next.

Try to go with the flow and try to take advantage of an opportunity to try something new when it comes up. Of course, an item doesn’t even have to be on your list. Just opening the door to trying something new will make way for loads of new opportunities.

Here are a few you can borrow if you’re not sure where to start:

What should I add to my Newb Year’s List this year? Comment below and let me know. Thanks for reading, and have a beautiful week in your nebula! 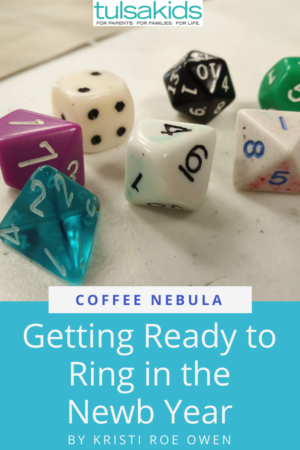