This is not a drill.

Okay, so ran is a little hyperbolic. There was a lot of walking. But the fact remains that this out-of-shape nerdy girl and her three kids survived the Ascension St. John Tulsa Zoo ZooRun presented by Community Care 5K and lived to tell the tale!

But how, you wonder, pray how did this adventure come to pass?

Like most of my family’s great adventures these days, it began with a groggy me checking my email at around 5 in the morning and getting a request from Tara, my editor.

If you feel like you’ve heard me talk about running before, you probably recall me saying on many occasions that if you see me running, you should also run because there is a source of impending doom behind me, likely bears, possibly zombies and/or sharknados.

It’s not that I don’t like physical fitness. I just have always preferred martial arts or dancing to running. If you were to bribe me with all the Star Trek toys in Wizard’s Asylum, I still would not have run. In fact, there’s probably only one thing that would have got me to run, and that’s a story.

But it wasn’t like they were asking me to run a whole marathon. I signed our family up for the Fun Run, the family-friendly race. That’s just a short little run, right?

I wasn’t as concerned about the kids running the Fun Run because they run regularly as part of their gym class at school and would be walking home from school with me every day and let’s be honest, it’s easier to force your kids to do a thing than to do the thing yourself.

But here I was, fortysomething and out of shape. I imagined myself showing up for the run, repping TulsaKids, and then randomly collapsing in the middle of all those children, fanny pack down on the pavement.

The humiliation alone sends chills down the spine.

So there I was, one month to go and a race to train for. I looked over the document I was sent, “14 Days to a Mile.”

Seems a little optimistic, I thought to myself.

I had the shoes, at least.

The training instructions recommend you start by alternating running and walking in one-minute intervals for ten minutes, but what can I say, I’ve always been nonconformist.

When I started training, I was already walking to my kids’ school every day, approximately 9/10 of a mile from my house, but the only running I was doing was the adrenaline-charged Frogger dash across 129th Street in midday traffic. Still, it was a start.

I cranked up my favorite walking playlist, 90s Aggro Anthems, and set off, estimating my on-minutes to the tune of “Schism,” “This Means War!!” and “Sabotage.”

The first couple of minutes, I wouldn’t say I felt pumped exactly, but I felt like, “Hey, this isn’t bad at all.” But as my heart rate climbed in the September heat, my aggro rock began to fail me. By the time I made it to the kids’ school, I looked like a fugitive from Snapped, mascara streaking down my face, red-eyed, the disheveled hair of a murderess.

When no one called the police on me that day as I picked up the kids, I took it as a good sign.

I’d like to say I eventually made it to the part where I ran a whole mile, but I’m a pragmatist. I set a goal for myself to just keep walking and running every day I could until the run, keeping a focus on good health.

After all, I was only doing the Fun Run anyway. Right?

Someone Play “Eye of the Tiger”

Race day fell on a pretty busy weekend for us. We had plans to cover the Name Your Game Expo, which I will write about next week, and visit the Tulsa State Fair the next day.

Lucy wanted to dress as animals for the Zoo Run, which if you read my blog at all, you will understand would be a completely on-brand thing for our family to do. Besides, people dress silly for runs, right?

Wrong. They don’t do that, as we would learn when we finally parked the car and strolled onto the zoo grounds dressed as an Evee and a deer.

I repeat: People do not cosplay for the Tulsa Zoo ZooRun. 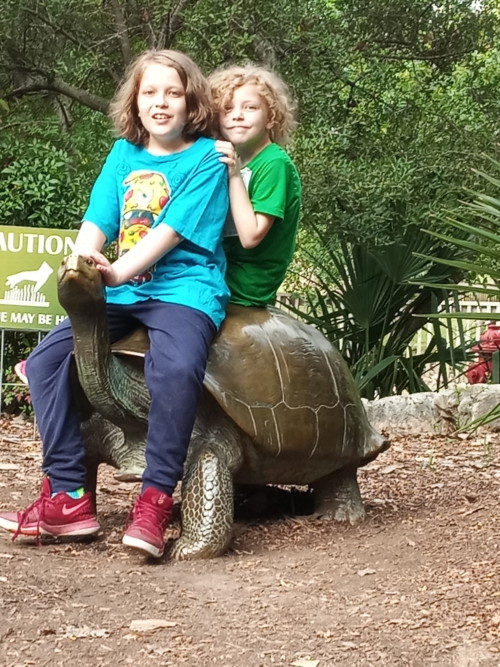 After we hid the evidence our animal outfits in our shame

I knew there would be a lot of people at the run, but in my mind that was possibly one hundred. I didn’t quite realize how long it would take to get into the actual zoo for the run in stop-and-go traffic, and by “quite,” I mean at all. TLDR we were quite late arriving and didn’t enter the zoo grounds until after the Fun Run had begun.

I was disappointed to have missed to Fun Run, but then I ran into Tara, who, as I mentioned, is my amazing editor and possible nemesis. She had a suggestion: “They’re lining up for the 5K and I bet you could just do that! If it’s too long, you could probably just stop early.”

In my barely defensible defense, five of anything sounds like a really low number. I asked the kids, two of whom have actually learned about the metric system in school fairly recently, what they thought. Team Animal Cosplay collectively agreed that five did, in fact, sound like a very reasonable number.

And so it was decided. Off we went, pinning our bibs on as we went with one safety pin because I’m a total noob and had no idea how they worked. “This isn’t bad,” Arthur said, jogging along with me a bit. We went on like that a ways, jogging and walking.

“I wonder where this ends?” Arthur said, more enthusiastic runners passing us on all sides. We’d been on the path for a while now, and I didn’t download a map like a most people would because of course I didn’t.

It was a beautiful day. Families with strollers, little kids, and all kinds of folks were out on the path taking it in. At last, a sign on our right: 1K.

“Ohhhhhh,” I answered the sign, comprehension dawning on me.

“Uh, Mom,” Arthur pointed, “Exactly how long is a kilometer?”

I hurriedly took out my phone. “Hey Google. How long is five kilometers?”

“Five kilometers is equal to 3.107 miles.” This, kids, is why math is important. 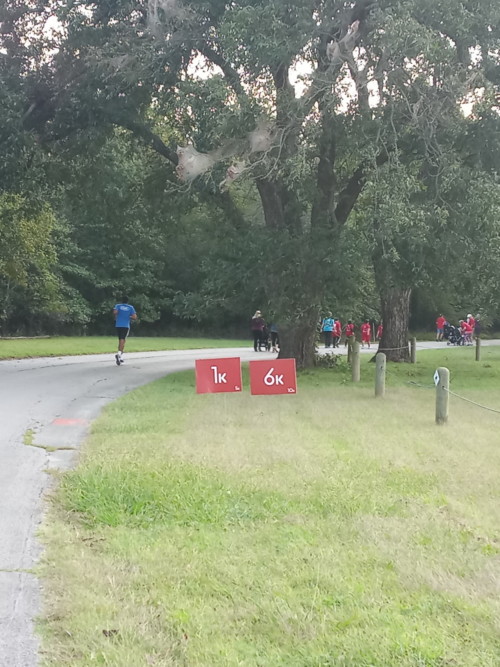 The Dawning of Metric Awareness

We agreed to neither mention nor think about that number again, and thanks in no small part to that decision, the rest of the distance wasn’t so bad. Yes, we were painfully slow, and yes, the giraffes were not amused, and yes, we looked ridiculous in our runner’s cosplay which is decidedly not a thing no matter what Instagram has led me to believe, but friends, we did make it, even high-fiving a police officer along the way just like in the movies.

That’s in a movie, right? It just seems like a movie thing.

It’s true that we gave some less than hospitable glances to the sweet folks holding signs of encouragement near the end, but that’s on us. Y’all did a great job. 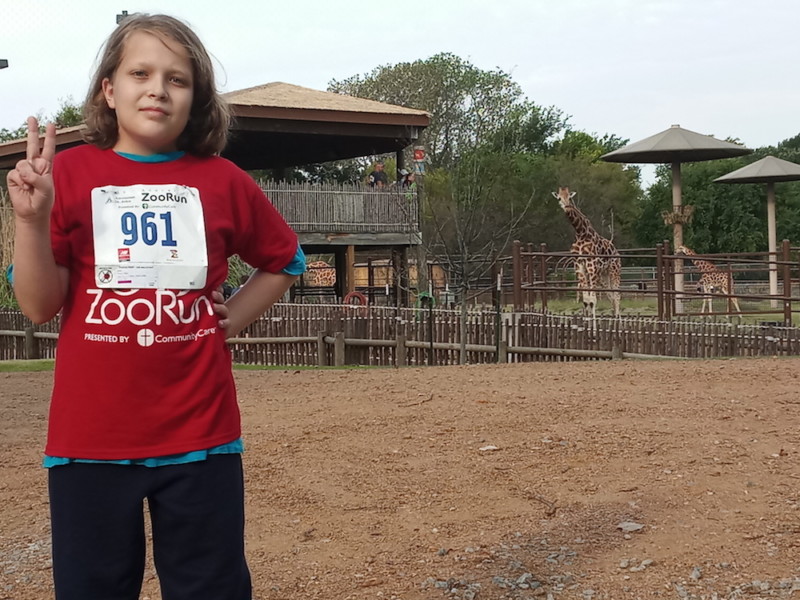 I repeat, the giraffes were not impressed

As we crossed the finish line, having already been passed by some of the 10K runners because that’s how absolutely slow we were, someone handed me a blue Gatorade.

As a reward for our toils, we got to hang out at the zoo and visit the animals, but since we had to be at Name Your Game pretty soon, we took the fast track through the meerkats, past the wise and mystical tortoises and that thing that looks a bit like a honey badger and basically sleeps all the time. Everywhere we stopped, an adult would croon over Lucy, “Awww! Did you do the Fun Run?”

“Oh no. We did the FIVE KAY,” she would enunciate slowly, projecting her words with a take-that tone, punctuating with dramatic pauses between words. My kids’ reaction to their response every time was the true prize of the run. That’s the moment it hit me like a runner crossing the finish line of a race you are not expected to cosplay for.

Physical fitness goals for kids are as much about giving them an accomplishment to be proud of as they are about the workout you get.

Dear readers, you and your fams should absolutely sign up for the Tulsa Zoo ZooRun next year, and if you feel so inspired, don’t hesitate to sign up for the 5K. It is an incredibly family-friendly race, and they’ll give you an awesome T-shirt and a cool runner’s bib so you can feel like the champions I already know you are.

Let me know about the time you signed up for something you never thought you could do in the comments and don’t forget to support our amazing Tulsa Zoo! And if you want to start a cosplay team with me next year, even better!

Thanks for reading, friends, and have a beautiful week! 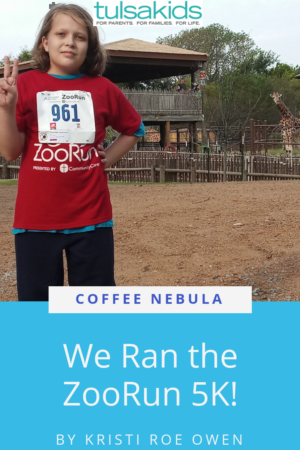