A Q&A with the Tulsa Zoo

Editor’s Note: Thank you to Tulsa Zoo for providing this fun Q&A about fennec foxes! The Tulsa Zoo has two fennec foxes, Milo and Mosley, whom you can visit inside Life in the Desert part of the Robert J. LaFortune WildLIFE Trek.

Where do fennec foxes live? (List some countries/continents and describe the environment they thrive in)

Of all the 34 living members of the dog family (Canidae), this is the most adapted to desert life. While other fox species also live in the Sahara Desert, Fennecs are adapted to living on sand dunes and can survive without surface water. They are found in Mauritania, Morocco, Mali, Algeria, Tunisia, Niger, Chad, Libya, Sudan, Egypt, and Israel’s Arava Desert.

About how hot would you say it is where they tend to live?

Daytime temperatures often reach 120 F but can drop to 50 F at night.

How would you describe their personalities?

Because of their acute sense of hearing and smell, and their small size (which makes them vulnerable to owls), when awake they are alert and very aware of their surroundings, and ready to react to anything startling, suspicious, or otherwise potentially dangerous, by taking cover.

Are they related to dogs and wolves or any other creature?

They are close relatives of Red Foxes (which are found in North America, Europe, Northern Asia, the Middle-East and Africa north of the Sahara), the Kit and Swift Foxes of the American West, and even the Arctic Fox.

They are not only the smallest fox but the smallest living member of the dog family. As adults, they weigh less than four pounds. (American Red Foxes weigh from eight to fifteen pounds.) At birth, the one to four pup each weigh less than an ounce and a half, and are born with their eyes shut and their ears folded over. They are weaned at around two months and reach adult size at six months. In the protected environment of zoos, they may live 16 years.

The ears of new-born fennecs don’t appear that much larger than other new-born canines, but by the time shortly after their eyes open, at ten days, the ears grow quickly, so that for a while, they are larger in proportion to the pup’s size than an adult’s are. They reach their full length of four to six inches by the time they are two months old.

Can you explain how their large ears help them beat the heat?

As a rule, mammals living in hot dry climates are inclined to have more surface area, with larger ears, longer legs and tails, and a slimmer build than animals that live in colder places. This helps them dissipate heat. Fennec ears are full of blood vessels, close to the skin, which act as a cooling system.

Yes. Not only do they have enormous external ears, but unusually large hollow structures in their skulls which give them amazingly good hearing. They not only can locate prey underground but dig it up very quickly.

Do they have any other physical attributes that help them stay more comfortable in their hot environment? (Like their paws or fur coloring)

Their sandy-colored coat deflects heat during the day, but also keeps them warm at night. Their paws have a layer of fur that protects them from the burning heat of the sand. Specialized kidneys enable them to live in waterless environments, deriving their moisture from their prey. They are able to quickly dig large burrows to sleep in during the daytime. They will lick the dew that can form in their burrows.

What sorts of things do they eat?

Their main prey is grasshoppers and crickets, as well as other insects, but they are capable of catching prey as large as rabbits, and also hunt rodents, reptiles, and small birds. They also eat some fruit and roots.

In zoos, they are provided with live crickets, mealworms, superworms, dog chow, pinkie mice, and raw sweet potato, carrots, and broccoli. At Tulsa Zoo, their favorite food appears to be superworms (which are the larvae of a South American Beetle).

Do they sleep during the day to avoid the desert heat and stay up at night?

Yes. They spend the day in their burrows. They are strictly nocturnal in the wild but can be active during the day in zoos. Their main predators appear to be large owls.

Do they tend to live alone or in groups?

Fennecs mate for life, so in the wild they are always found in breeding pairs, with their offspring. Such family groups can sometimes include up to ten animals. 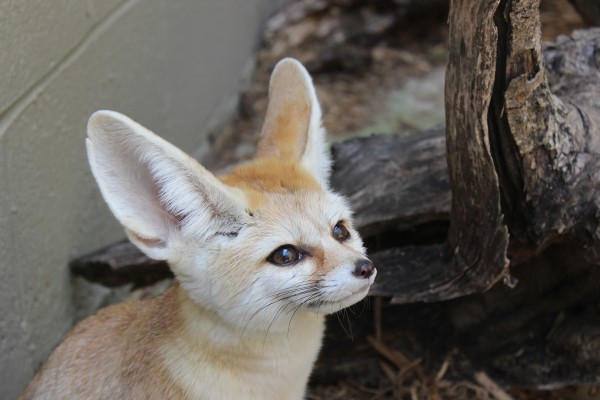 The International Union for the Conservation of Nature (IUCN) classifies the Fennec as being a species of Lest Concern (in no immediate danger of extinction). This is partly due to this species’ large geographic range across the Sahara, and also the fact that humans, and their domestic animals are only able to make brief visits to the more barren parts of the desert. They don’t thrive in places where people keep dogs and cats, as they can catch their diseases. But some Fennecs still live not far from the crowded city of Cairo, in Egypt.

We want to let readers know that it’s never ok to have a fennec fox as a pet. Can you please list some reasons why they aren’t good pets?

Because they are naturally perpetually alert and attentive, they are easily distressed by loud noises and unexpected events. In the predictable environment of a zoo, they soon become used to certain levels of noise and activity, but most people’s households are likely to provide disturbing and startling experiences.

While they can be playful, they do not enjoy being held or stroked. Their playfulness often includes piercing screams, like air being released from a balloon, which they will sometimes produce for minutes on end. They enjoy ripping things apart, so toys, keepsakes and other treasured objects, not to mention electrical cords and other dangerous things will need to be carefully protected. Their remarkable ability to dig can quickly ruin carpets, furniture, and bedding. Though they don’t possess scent glands like some other foxes, their powerful kidneys give their urine a skunky smell, and as they can’t be trained to use a litterbox, one’s whole house could soon smell like skunks. They don’t take to leashes, and, because of their excitability, should never be allowed to be free out of doors, as they may run off. They are also prone to find indoor hiding places from which it can be very difficult to extricate them. 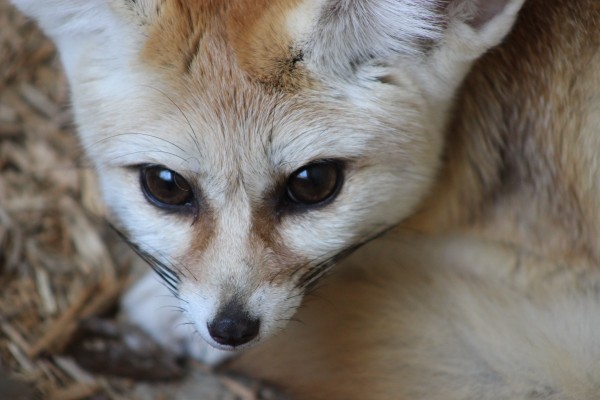 The Tulsa Zoo is limiting gatherings to promote social distancing. Unfortunately, our keeper chats, programs and events are being canceled, but there is still lots to do at the zoo! A zoo adventure now begins online at tulsazoo.org/tickets, where all guests must reserve their entry timeslot.