There are 75 middle-school students in the long, sunlit room, sitting four to a table.

They work quietly and independently on laptops, most wearing headphones. Some fidget, their chairs rocking with them.

A teacher sits at a desk reviewing the students’ work. She announces someone has passed their assignment, and applause ripples through the room Two other teachers roam around the class, checking with students individually. A fourth teacher sits next to a girl on a couch in the hall, working one-on-one.

When it’s time, the students get up and hustle with their laptops to snag a lounge chair or bean bag. They can play a math-based video game now, but the server is down. Some students grumble, but then switch back to their lesson.

Is this the classroom of the future?

Education experts embracing the concept of “personalized learning” think so. They see entire schools with large classes of students not tied to the lockstep of grade levels, advancing individually at their own pace. Once a student shows they’ve mastered a concept, they move on, independent of their classmates. Students have more control over when, where and how they learn.

Some have gone all in with all students. Others have created a school-within-a-school or are using personalized learning only with alternative students.

But some early adopters have stumbled hard, demonstrating pitfalls when schools embrace the emerging trend. At least two districts with issues have since scaled back or put their program on hiatus.

“If implemented well, it can be a really good thing,” said Brent Bushey, executive director of the Oklahoma Public School Resource Center, an Oklahoma City-based nonprofit that has led the march toward personalized learning in Oklahoma through a program it calls Momentum Schools. But that’s not always the case.

“Some of our most exciting work has also been some of our biggest failures,” he said.

The Concept of Self-Paced Learning

Tailoring instruction to individual students’ needs and interests is not new, and origins of the concept can be traced back even to the 1890s, when the schools in Pueblo, Colorado, allowed students to work at their own pace. But the prevalence of technology in classrooms has fueled new approaches to learning.

The term “personalized learning” is now being used to describe everything from supplemental digital programs to completely redesigned schools.

It’s not the same as online education, though most of these schools use a digital platform to teach concepts, assess students and monitor their progress.

Silicon Valley and the “ed-tech” industry are influential in pushing the model, with huge multi-million dollar investments from sources like the Chan Zuckerberg Initiative, created by Facebook founder and CEO Mark Zuckerberg and his wife, pediatrician Priscilla Chan, and the Bill & Melinda Gates Foundation, chaired by Microsoft founder Bill Gates. The Chan Zuckerberg Initiative is behind the Summit Learning platform, which is now used by 330 schools across the country, according to their website, including some Tulsa district sites and John Rex Middle School.

Proponents of personalized learning say it meets students where they are. Instead of teaching to the middle in a classroom of 30 students, advanced students can move ahead, struggling students can get extra attention, and those in the middle can stay on track. Education experts say the concept should not be just about differentiating lessons but carving out holistic individualized learning paths.

Critics say there are risks: too much screen time, students gaming the system and little evidence of academic gains. A 2017 report by RAND Corp. found only modest gains in math. An earlier report by RAND found students at personalized learning schools were less likely to enjoy school and schoolwork, compared to a national sample of schools.

Some parents have questioned whether the technology platforms do enough to protect student privacy and data. Teachers may question how they fit in, when most of the instruction occurs online. A Chicago teacher wrote, “It isolates children, it breeds competition, it assumes children can learn entirely on their own, and it dehumanizes the learning environment…”

Despite the questions, some schools are forging ahead.

Principal LuVona Copeland admits the first few weeks of Okmulgee’s ACE High School in 2016 were chaos. In an attempt to improve students’ outcomes after graduation, school leaders decided to try something new. They created a personalized learning program on the high school campus.

Many of the first students, who have to apply and be selected, thought it was too hard. Teachers struggled to adjust. There were angry calls to school board members.

“We hit the reset button on a lot of things,” Copeland said recently in an interview, just before the beginning of the program’s third year. “We worked really hard on culture, and that has taken two years.”

More than half the ACE students improved their math scores on the ACT exam last year, Copeland said.

This year, just over a third of the district’s 400 high school students are in ACE and will have their own space next to the high school. There’s a classroom for each core teacher (math, science, English and history) plus a lounge area. The furniture is flexible, and students choose where to work, and on what.

School hours are from 7:30 a.m. to 5 p.m., and students have to log six-and-a-half hours per day but can otherwise choose when they arrive and when they leave.

History teacher David Dunlap says if a traditional high school were a train station, with trains departing on a schedule like the school bells, ACE would be an airport. Each passenger comes and goes as needed within a time frame that works best for them.

“The structure is there, it’s just loose,” Dunlap said. “Some people are taken aback, because this isn’t what school looks like.”

The key, he says, are the relationships between the students and the staff, which includes four certified teachers and six “success coaches.”

The community has struggled following devastating job losses: An oil refinery closed in 1981 and a glass plant shuttered in 1994. The district’s student population has decreased by a third since the mid-1990s, and more than 90 percent of the district’s students qualify for free or reduced-price lunch.

That’s one reason the ACE program and its focus on life skills is important, Dunlap said. “We’re trying to get kids life ready, not just walk across the stage ready,” he said.

Chickasha school leaders began touting the success of the district’s personalized learning program immediately after it began in 2016. In the first months they were hosting other school districts for tours of the “Student Personalized Learning Campus,” a remodeled school-within-a-school with its own amenities.

Superintendent Dave Cash frequently touted the program’s successes and in October, he took a leave of absence to work for the Oklahoma Public School Resource Center, speaking to groups of school leaders interested in the model.

The mother said her daughter, and 30 to 40 other students, had access to the teacher’s username and password.

An investigation by the department found an unusually high number of personnel log-ins and grade changes. During a four-month period, about 5,500 student grades and 18,800 assignment grades were overridden. In March, State Superintendent Joy Hofmeister called the allegations “extremely troubling” and asked the Oklahoma State Bureau of Investigation to probe further.

Cash on Thursday denied wrongdoing. He said his biggest regret was moving too fast in implementing the program.

“Other groups were trying to push us as a model to replicate, and that was never our intention,” Cash said. “Our intention was to educate kids.”

The situation roiled the community of 16,000. There was a spate of suspensions and resignations at the school district and school board. Cash resigned in March and is now superintendent of Pawhuska Public Schools. “I hate the fact that it gave the whole school district a black eye,” he said. “There are so many good people in that school district.”

Also in March, the school board voted to discontinue the personalized learning program for the 2018-19 school year, records show.

The school’s founder, Ken Grover, has traveled the country as a consultant, inspiring many school leaders to implement the model in their own schools. He worked, or is working, with Okmulgee, Chickasha and John Rex.

According to a story by the Utah Investigative Journalism Project, Grover has come under fire by the school district for exaggerating graduation rates and profiting from outside consulting without disclosing it. School spending is also being questioned, with thousands of dollars spent on gaming systems, expensive headphones, candy and sugary treats.

When reached by phone Thursday, Grover denied any malfeasance or misrepresentation related to the school.

Grover resigned in December but has continued his consulting work, including with the Oklahoma Public School Resource Center, which hired him as a consultant to work with school leaders here.

Critics have accused the center of making money off the personalized learning push, but Bushey says it’s actually a “huge expense.” The center’s 2016 tax return, which runs through June 30, 2017, shows total expenses of $3.2 million and revenue of $2.1 million. The centers’ funding comes from foundations and memberships, which schools pay $2,500 annually for.

Bushey said while setbacks have been disappointing, the center’s work on personalized learning continues.

“We’ve had a lot of discussions at the OPSRC about what went wrong (in Chickasha),” he said. “We’re proud of the work. We know it’s hard.”

Oklahoma Watch is a nonprofit, nonpartisan media organization that produces in-depth and investigative journalism on a range of public-policy issues facing the state. For more Oklahoma Watch content, go to www.oklahomawatch.org. 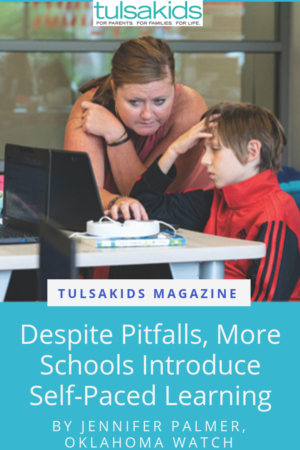