With a little planning, a weekend trip to Paris isn't impossible--is it?

So, last weekend I took a little quick trip to Paris. It was magnifique! I hired a nanny through Seeking Sitters; she happily watched my many children while I jetted in business class across the Atlantic. I stayed at the Ritz Carlton right in the heart of Place Vendome, and spotted Anna Wintour sipping a cocktail in the Hemingway bar (bodyguards hovering nearby). I dropped beaucoup de bucks at Chanel, Balmain, and Louis Vuitton. I am pretty sure Kim Kardashian was in the next dressing room at Celine. I powered through a decadent five-course meal at Pierre Gagnaire – each course paired with a different wine, concluding with cognac and a diaphanous chocolate souffle. A rogue-ish Frenchman – Guillaume, I think – was terribly attentive to me and tried to buy me drinks, but don’t worry PVT! It was nothing! I sat front row right next to Lady Gaga at Paris Fashion Week, and ordered some Stella McCartney frocks on the spot. The last night I had drinks at L’Avenue with my besties Rihanna and Jessica Alba. Oh, it was so hard to leave the City of Lights! Mon dieu! I can’t wait to go back!

Ha! Ha! Did you buy any of that? You know I have a jillion kids, no staff and a budget? Well, but guess what? A real-life Tulsa mom did go to Paris! My dear friend Noreen — who has almost a jillion kids and a budget — just got back from a whirlwind 48 hours in Paris. Now, she had some help: her fabulous parents live in town, so they were able to oversee her kids. Noreen’s wonderfully accommodating husband, Brice, who had to work, was also able to import his mother to help with logistics. And Noreen happened to be going to visit her sister and brother, who both live in Zurich. But she made a Paris trip happen, even with her niece and nephew in tow! 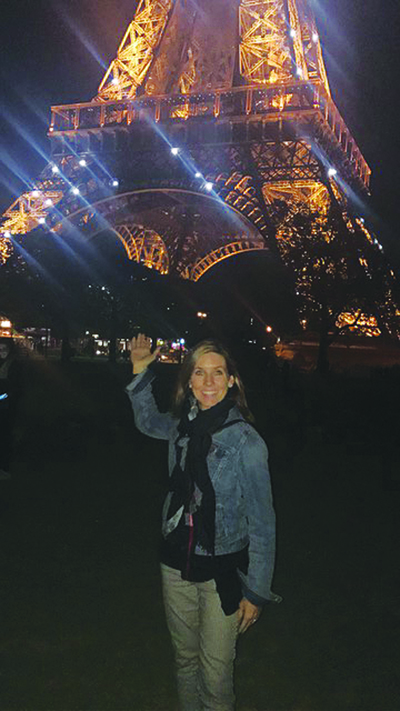 Noreen and her siblings stayed in an apartment in the Triangle D’Or – Paris’ Golden Triangle, where three of Paris’s famous boulevards converge: the Champs-Élysées, the Avenue Montaigne, and the Avenue George V. The Champs-Elysees might be the world’s most famous street! It houses high-end retail, big business, cafes, celebrity sightings and “tres riche” neighborhoods. It’s also the site of the finale of the Tour de France, Bastille Day parties and World Cup victories. Noreen loved people watching here – and watching the Parisians people watch! Apparently, they are all voyeurs. And then the sisters shopped! They hit the Champs-Elysees, and Noreen was surprised to see stores you would see at the local mall: Nike, Banana Republic, Abercrombie, The Disney Store, H & M and Sephora. But then her heart started racing: Louis Vuitton! Dior! Hermès! Emilio Pucci! Celine! Gucci, Chanel, Valentino, Chloé! Ah, bliss! Alas, she didn’t buy anything at these stores because what Tulsa mom without a trust fund needs clothes like these? But she did go into Zara (a favorite of Princess Kate), which is both stylish and affordable, and found some great stuff there she’ll actually wear.

Because Noreen had her niece and nephew with her, there were no four-hour, seven-course meals. But they did have some of the famous French-y food France is known for: croissants, lattes and cappuccinos, wine and champagne (in fact, the sisters had to pretend they were pregnant as they walked around the Eiffel tower because too many people tried to sell them champagne). They enjoyed traditional fare like a Croque Madame – a hot pressed sandwich with an egg – and a Croque Monsieur, the same without the egg. They also devoured excellent charcuteries (meat and cheese boards) and French Onion soup. Noreen loved watching all the fancy businessmen gather together in cafes for shots of espresso before heading out to conquer the world. 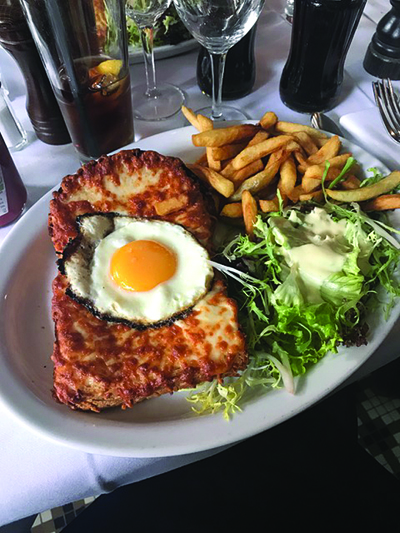 And, of course, the French don’t get fat because they walk. Noreen walked seven miles the full day they had in the city. Even though Paris is home to more than two million people, she never felt overwhelmed since the neighborhoods are so quaint and cozy. (An aside: Noreen doesn’t speak French either, but since most Parisians can get by in English, she did just fine). And, while they didn’t have time to do intense sightseeing, she saw from the outside most everything she wanted to. First on the list was the Louvre — the home of the Mona Lisa — which now totals 652,300 square feet. Even if you’re not a museum buff, Noreen recommends walking around the grounds of the Louvre. The gardens and fountains are spectacular and the architecture is so opulent and ornate. And the modern glass pyramid juxtaposed next to this almost ancient fortress is quite the spectacle! They saw the Arc de Triomphe and the Obelisk of Luxor at the Place de la Concorde where the guillotine once sat. The 72-foot tower was erected by Charles X to honor his brother and the many other lives lost there. 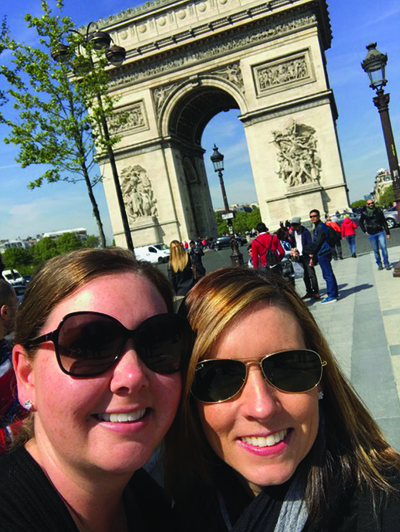 And, while Noreen didn’t have to actually ascend the Eiffel Tower, she strolled around the most-visited monument in the world. She also loved meandering along the Seine River and visited the glorious Notre Dame, dedicated to “Our Lady.” She thought it was stunning, with its pair of 200-foot tall bell towers, the stained glass rose window with Mary and the baby Jesus and all the gargoyles peering down from the heights of the church, which represent souls caught between heaven and earth.

So maybe you don’t have a nanny, a jet to charter, or even a lot of disposable income. But with a little planning, even normal moms like us can slip off to Paris for 48 hours. Because even while we spend the bulk of our time helping our kids make memories, it’s nice to have a few magical memories of our own.