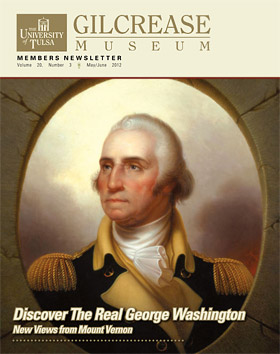 You really need to take your family to see the George Washington exhibit at Gilcrease Museum RIGHT NOW! Discover the Real George Washington: New Views from Mount Vernon opened on June 24 and will be in Tulsa until Sept. 23. Here’s the thing. We all grew up learning about George Washington. Every school kid knows who George Washington is, but unless you’re just a G. Washington expert, I promise you’ll learn something. And if you don’t learn something about our country’s founding father, then at least you’ll be entertained. The short films in the different exhibit rooms were done by the History Channel. Who knew they did anything other than the World Wars and Hitler? There are many artifacts, including a copy of Martha Washington’s wedding dress and her wedding slippers (very ornate — and tiny). You’ll learn about Washington’s teeth, and see the set of false teeth he used (ouch). There are three life-sized models of Washington at different important times in his life — one on horseback that is amazing. After going through the exhibit, you definitely have a clearer, more personal view of the man.

For those of you who are BIG TIME RUSH fans, we just put up our contest for an opportunity to win a family four-pack of tickets to the concert at the BOK Center on July 15. One show and one show only. I have no idea who Big Time Rush is, but they’re having a Big Time Summer Tour! (I guess that shows where I am in the kid age range.) We have two sets of tickets to give away, so go to our Contests & Giveaways section on this website and enter. We’ll draw the winners on Monday, July 9.

This Friday, June 29, is a fun festival in downtown Tulsa — SalsaFest 2012. It’s from 5 to 10 p.m. at the H.A. Chapman Centennial Green Park at 6th & Boston. They’ll have live Salsa music and dancing, a FREE Kids’ Zone and activities, art booths, a Chihauhau Costume Contest and races and salsa tasting. How hot is that?

In honor of SalsaFest, here’s a great recipe for Watermelon Salsa. If you’ve never tried watermelon salsa, I think you’ll be pleasantly surprised. It’s great on fish, fish tacos or grilled chicken. Oh, and it’s good with tortilla chips, too.

Put all ingredients into a glass bowl. Toss to combine. Cover and chill for 30 minutes before serving. Serve with tortilla chips.

And to get you ready for the July heat, here’s a recipe for Ziplock Bag Ice Cream. Kids love to make this (and eat it!) Do it while you’re waiting for the fireworks next week!

Put the smaller bag into the larger bag and seal.

Shake and mix until the ice cream thickens – about 10 minutes. Kids also can GENTLY throw the bag back and forth to help mix the ice cream. The bag can get really cold, so have kitchen towels around to hold it.

Once the ice cream is thick, take the small bag out, open and eat out of the bag or put in a bowl.