What is Baby Led Weaning (BLW)?

I‘ve been hearing the term “baby led weaning” for a while now, but I just assumed it had to do with breastfeeding. Upon further investigation, it’s actually just letting your baby feed themselves from the beginning of introducing solids into their diet. So in a sense, it’s the very beginning of them weaning from the breast, but on an expanded timeline. Also, there’s a bit of language confusion happening because in the UK, ‘weaning’ means ‘adding complementary foods’, whereas in the States it means ‘giving up breastfeeding’. 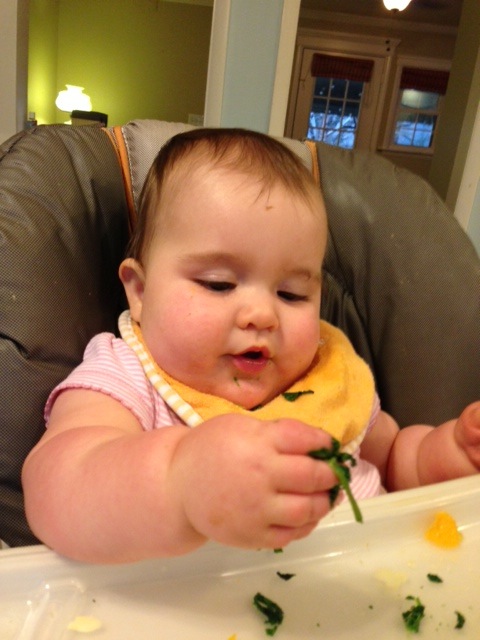 When we first began solids, I made pureed/ homemade baby food, but I’ve definitely been giving my 9-month-old more table food than I ever gave my firstborn. I was probably way paranoid that something bad was going to happen – which, in my defense, it could have…but it didn’t. He (now 3-years-old) isn’t what I would say a picky eater, but he’s definitely not a brave eater. For example, he will mow through some hummus, but he won’t even try watermelon. He has issues with consistency.

My baby though, she’s all in. I am way less uptight about it, which may or may not be why, but just saying.

Anyways, I’ve been giving her bites of whatever we are having for dinner. She eats scrambled eggs and bananas for breakfast, apple sauce and whatever I’m having for lunch and lately dinner has been kind of a free for all. It’s awesome. Yesterday she had lentil soup for lunch!

I’ll also puree carrots and other veggies for her when I have the time…and to make myself feel better when I’m worried she’s not eating enough (insert chubby baby joke here). But, apparently, I am somewhat following this Baby Led Weaning thing pretty well. I’m hoping it will make her a more adventurous eater than her brother is. Plus, it makes me more conscious of what I’m cooking (ahem, baby weight still hanging on). Double Plus, it’s freaking easy!

So, if you’re thinking of giving it a try, here’s a good blog with details and Q&A.