My name is Stephen Kerckhoff, I am the dad to twins Reese and Blythe and husband to my loving wife Jen. This weekend marked the longest weekend I have spent alone with my beautiful twin girls as their mother celebrated her best friend’s bachelorette party in Scottsdale, AZ. Here is our weekend and why my wife will think twice about ever leaving us again.

The weekend started as I dropped them off for school Friday morning. I picked them up at 12 pm, fed them lunch, they ate a combined one-and-a-half nuggets and three fries, then thought they deserved juice and milk, after saying no 3 times I gave in… they owned me, and they knew it. After their 1.5-hour nap we went swimming at the Bryces, played the blanket game with Uncle Wally and ate cookies until we had to come home. The night came to a close around 8:30 pm, I felt like I beat the night because it only took me one hour to put them to sleep.

Saturday started off very well. We hung the American Flag, stopped by a garage sale and put on our OSU cheerleading outfits to support their favorite team. After naps we got a call from Aunt Betsy and Uncle Wally that one of their friends was getting rid of their playground and wanted to give it to us. The girls were ecstatic when they saw this. They ran and played for the next hour. At that point I knew we needed this playground, they absolutely loved it, and they officially wore down Uncle Wally from all of their running. 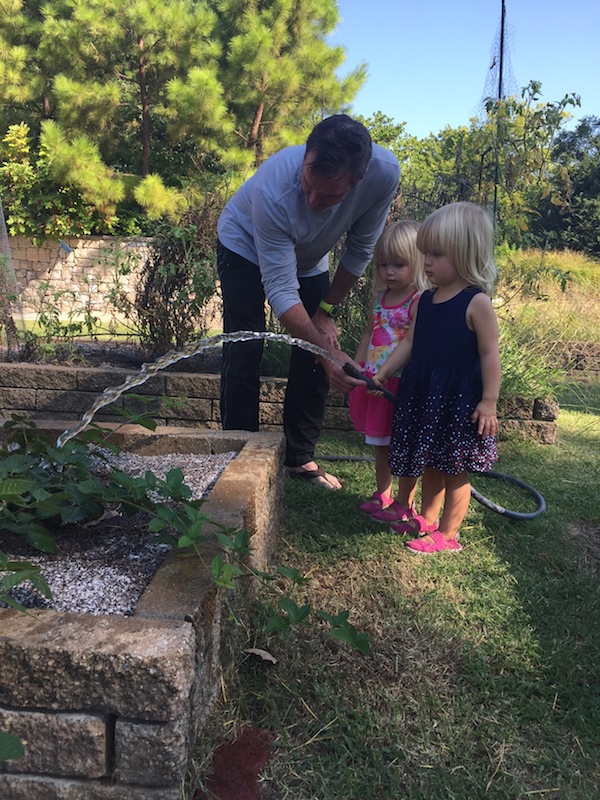 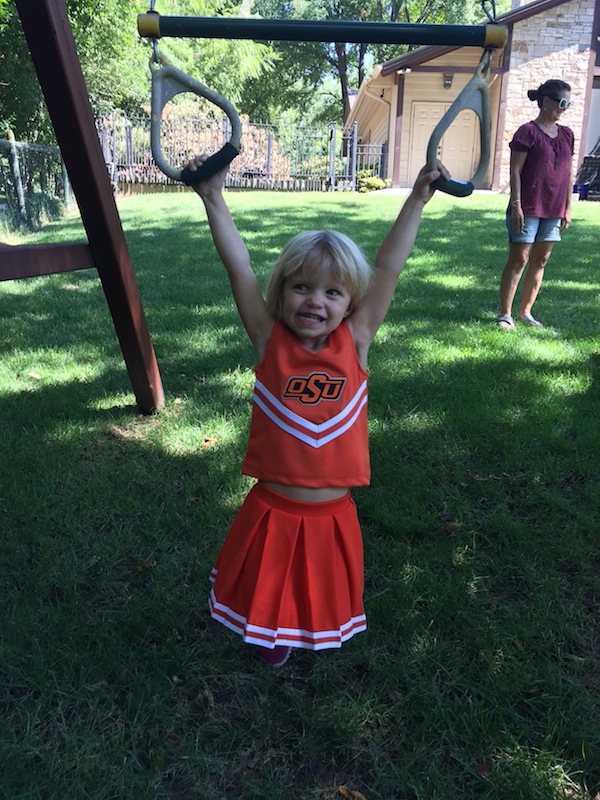 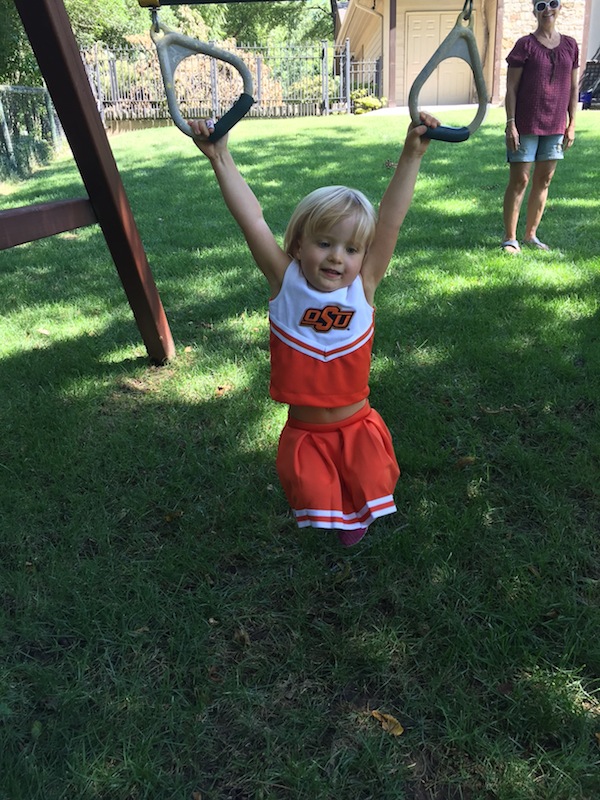 A Trip to the Emergency Room

Shortly after we got home that afternoon we decided to paint outside. Which, as anyone knows, is typically followed by a trip to the bath, this was no different. It was at this point, not five minutes after the bath, that the day would take a turn for the worse. It was at this moment that I realized the structure of how we played inside would change forever. I will say that when mom is home I hear “NO RUNNING” much more than when it’s just me; I now understand exactly where she was coming from.

Reese, not knowing her own speed, tripped as she entered the play room and hit her head on the side of the table. As she started crying I ran into the room to see a big gash in between her eyes. I can honestly say I have never been so scared in my life. Shortly after we rushed to the emergency room as Wally and Betsy took care of Blythe, I can honestly say there is nothing better than having family that only lives one minute away and drops everything when they are needed.

After spending three hours in the Saint Francis Emergency Room, my poor little Reese received her first five stitches, which she handled like a pro! From this moment on I knew I had to be stricter about how I let my kids play in the house, Yes, Jen, you were right!! We now have a “No Running” sign in the hall at the entrance to the playroom. 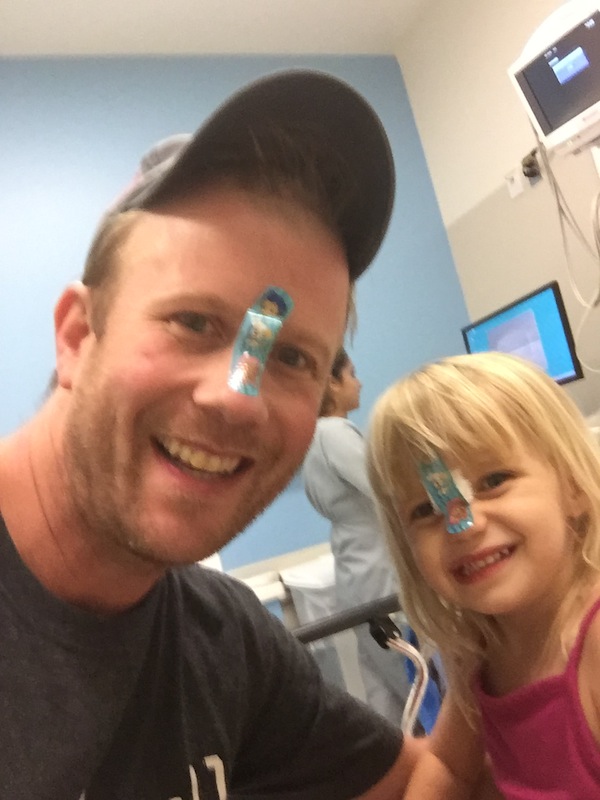 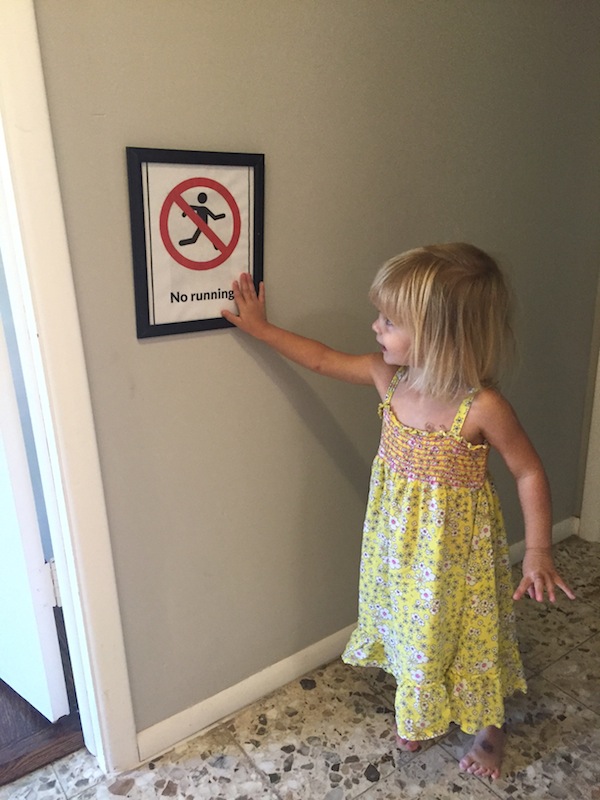 The Rest of the Weekend

The following days were much more relaxed. We went to Target with Nana, picked cucumbers and watermelons with Wally and Betsy and watched a lot of tv. Being a parent obviously comes with a lot of responsibility. I have a newfound respect for everything my wife does, especially when I am not around. To close this out, I simply want my wife to know that I think you are the best mom these two precious girls could ever ask for. The time and effort you put into constructing their lives and loving them unconditionally knows no bounds!