Thoughts As Joss Heads Back to School

How can we make mornings easier? 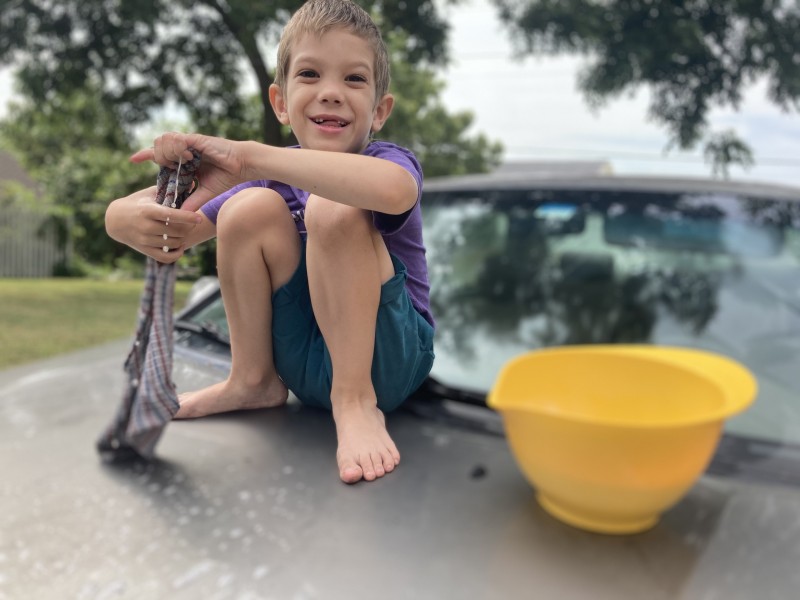 Joss happily cleaning the car for me after a rough morning.

Joss starts school along with the rest of TPS kids on August 19. We’ve got our school supplies purchased, and I bought new masks PLUS mask filters. So in that sense, we’re prepared. Although I’m still worrying that I’ll miss some key back-to-school information somehow, and the delta variant is worrying. I appreciated Betty Casey’s blog post on Covid in the Classroom. She reminded parents that, though the delta variant is a real threat, we’ve been through over a year of pandemic and are well versed in the basic safety protocols. Mask-wearing, hand-washing, talking to kids about how germs spread, etc.

Beyond Covid concerns, what’s most on my mind heading back to school is how to make drop-offs smoother. On most days, Joss runs into the school building, happy as can be. Despite the disruptions of distance learning, he had a great Kindergarten year and settled into his new school quickly once they switched to in-person learning. However. We’ve had a few very difficult mornings. It’s so fun when other parents walk by you on the sidewalk saying, “Hang in there!” or just sharing sympathetic glances as your child yells and flails. And clings to you like an angry barnacle rather than skips across the street to school. The good thing is, I know he calms down quickly after I leave, and ultimately, he loves his school.

It’s true that most of these episodes happened during times of transition – Monday mornings, for example. And naturally, I’m trying to arm myself in advance in hopes that they are even fewer and further between this year. Here are a couple ideas I’ve already implemented:

1. Go to sleep in the next day’s clothes.

Joss loves his pajamas, but even more than that, he loves not having to change clothes in the morning. So he is very happy to wear shorts and a T-shirt to bed. This effectively eliminates one potential morning struggle.

Before we rescued Raven last spring, Joss agreed to cleaning the litter box each day. He was more keen on the idea of getting a cat than Daniel or I, so we got him to agree to helping with that nasty little chore in exchange for getting a cat. However, he hates this job. Understandable. It’s gross. After talking to a couple friends, the overall takeaway was that maybe this wasn’t an age-appropriate expectation. So I let him choose an alternate chore. He is now the “spray master” – aka, the house duster. And I’m on litter duty. This means that when the litter box is stinky in the morning, we’re not going to be initiating a fight, trying to remind him that he promised he’d do this and just needs to do it.

Was that the right decision? I don’t know. But eliminating that extra worry is good for now. He can do dusting on weekends or afternoons, times when he has more energy and it doesn’t throw off the whole morning.

After talking to some other people (thank you!) and doing some research (mostly on the TulsaKids website), here are a couple other changes I want to make this year:

Joss’s school begins at 7:30 a.m., which I loathe. I really wish it were 8. Mostly because I tend to read or watch TV (or both) after he goes to bed, so I’m always getting to sleep later than I should. Last year, after he went to in-person learning, we moved bedtime up to 8 from 8:30 p.m. This year, 7:30 might be a better idea. That way, I could go to bed earlier without sacrificing that precious, precious alone time. And then we could try waking up right at 6 a.m. I think this is what I was generally aiming for last year, but that snooze button was pretty tempting.

Making an effort to wake up earlier would lead to…

I love that Joss gets fed breakfast and lunch at school. It definitely makes mornings easier! And more importantly, is essential for kids who might not have access to full meals otherwise. But a friend reminded me that the food they get at school isn’t necessarily healthy.

So, if we have more time in the morning, I can make sure to get our day off to a more nutritious start. And hopefully having this time will also help set a more positive, relaxed tone in general.

Here are some healthy breakfast ideas from Natalie Mikles that were published in our September 2019 magazine. And keep an eye out for next month’s magazine, where she shares a variety of yummy smoothie options! Each recipe has just one instruction: Put everything in a blender, and blend thoroughly. Couldn’t be easier! And maybe I can make sure to clean the coffee pot in the evening and measure out the next day’s beans, so that eliminates some steps as well 🙂

I’ve touched on this already, but a lot of the morning conflict probably arose from me oversleeping, and trying to rush through everything in order to get out of the door on time. Or trying to get Joss to do something he didn’t want to do – and again, not having time to work through the conflict adequately. This article from TulsaKids’ August 2019 magazine reminds parents how important it is to make positive connections with kids early in the morning: tulsakids.com/want-to-make-mornings-smoother.

The article says, “Parents who struggle with mornings that devolve into a frantic race against the clock in an attempt to drop a cranky kid off at school on time with two matching shoes often find much of the stress can be circumvented by taking a moment to connect before the storm erupts.” Imagine!

4. Talk with his teacher.

We did summer camp at Joss’s school in July, which was absolutely amazing. One benefit was getting to pick him up in the school office, and getting to know the two women working in the office better. After a second dreadful drop-off experience in one week (what?!), a friend suggested I email the office or a counselor to touch base. Just knowing that they were aware of the issue and that they could help was a relief! She reassured me that there are several quiet places throughout the school where teachers etc. are prepared to take kids who need a moment to calm down. And that she would try to meet Joss at the door the following day to make sure he had an easier time.

Someone else advised me to email Joss’s teacher. She said her child had separation anxiety in pre-K or K, so the teacher would always make sure to greet her daughter at the door. I don’t know how possible this is now that we’re dropping kids off outside of the building, but it’s a good reminder that teachers are there to help, and it’s important to communicate with them!

Kiley Roberson shared some helpful tips for Surviving Separation Anxiety in our August magazine: Create quick good-bye rituals. Be consistent. Attention (Pay attention to your kids). Practice being apart. I do feel like our good-bye ritual is pretty consistent – until it isn’t! On the days that go smoothly, I walk him to the crossing guard, give a hug, and wave goodbye. But on the days where he’s unhappy, that routine isn’t so possible! But maybe making a more consistent routine starting earlier in the day, or adding an extra element to our drop-off routine would be helpful.

Here’s an article I want to go back to later, on helping kids with emotional regulation: childmind.org/article/can-help-kids-self-regulation. Figuring our difficult mornings may be part of a larger issue where I need to help him develop some better self-regulation skills in general. And someone in our TulsaParents Facebook group mentioned that, if getting enough sleep is an issue, it might be a good idea to rule out a sleeping issue. I hadn’t even thought of that!

I also signed up for a parenting class through Family & Children’s Services. It’s a virtual class meeting six weeks on Wednesdays, for $120 total. Hoping this helps provide some strategies for future melt-downs and just helps me know how to handle them better. The class description says it should teach parents of 5-12 year olds

If you have any advice, feel free to leave it in the comments! Since he usually struggles the most on transition days, I’m slightly dreading that first-day-of-school drop off. But hopefully I’ll establish better habits early on, and things will be better all around. 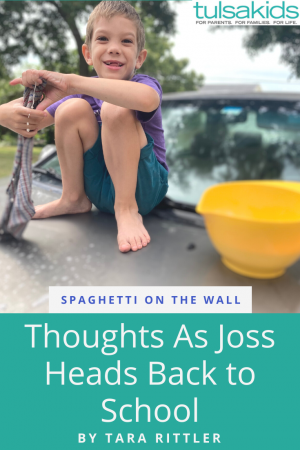