The Tulsa Little Light House Gets a New Building 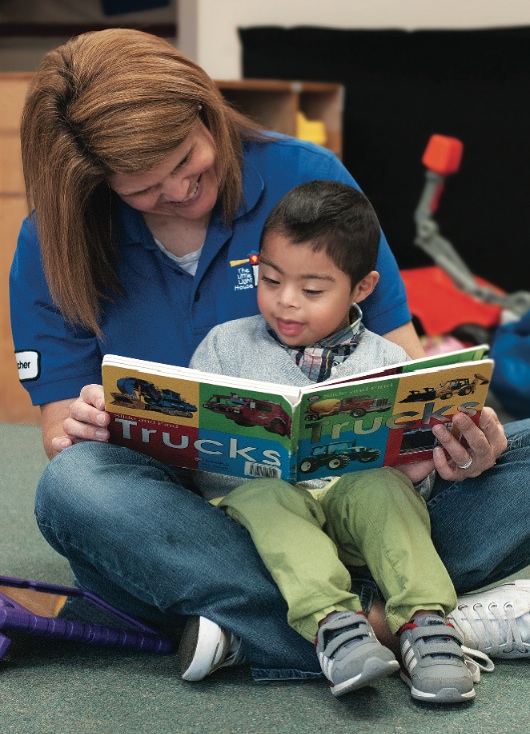 Imagine a place where young children with special needs find normalcy in the routine of attending preschool. A place that starts the day with circle time and good morning songs – but also incorporates sessions with an extensive team of in-house therapists. Imagine a place where families can learn how to help their children achieve their greatest potential, and can find comfort in knowing they are not alone in their journey. And imagine this place is completely tuition free.

Such a place doesn’t actually require imagination at all. Tucked back off the intersection of 36th and Yale, The Little Light House, Inc. has been doing all of this and more for the past 43 years. Welcoming children with special needs ages birth to 6 years through its doors, the school is a nationally recognized developmental center with a Christian faith-based mission at its core.

For Tulsa mom Audra Kahne, a diagnosis of Down syndrome for her son Judah at the time of his birth came with a lot of questions. “When we learned there was a school here in Tulsa that was tuition free that could help us, we were relieved,” she said. Judah was placed on the school’s waitlist even before he left the NICU.

Now a happy 5-year-old student at The Little Light House, Judah entered the school three years ago unable to walk, feed himself or communicate effectively — all skills he has honed under the care and attention of his team of teachers and therapy specialists — an approach the school calls “transdisciplinary.“

“His teachers say he is a totally different kid than he was last year,” Kahne said. “He has come out of his shell and feels comfortable there.” But perhaps best for his proud mom, at The Little Light House he “is himself.”

Though The Little Light House is firmly rooted in a Christian mission, the school does not discriminate on the basis of religious orientation. In fact, notes Executive Director Jean Winfrey, children from Jewish, Muslim, Hindu and Atheist families have been welcomed into the community.

Spots at the school are coveted. For the past 20 years, there has only been enough room for 64 youngsters and their families. The waitlist for admission is currently at 163 prospective students. Winfrey says that children are accepted for admission to the waitlist on the basis of an application process including an in-person evaluation with the school. Any child with a special need is eligible, she notes, even if he or she has not yet received an official medical diagnosis.

Later this summer, thanks to a brand-new $15 million plus expansion of the campus, 28 more children and their parents will be able to join The Little Light House community for a total of 92 spots. The addition, notes Winfrey, will allow the school to significantly shorten the wait-list that has propelled many parents to sign up their children at the time of in-utero diagnosis.

One such family is the Vandrells, whose daughter Lucy, now 3, was diagnosed with spina bifida before birth. Lucy was placed on the school’s waitlist two months before she was born and offered a spot when she was 2 years old.

“We’re believers, so it’s nice that she can go to a place that is faith-based…where she is not just getting regular education but also spiritual education,” said Lucy’s dad, Jon Vandrell.

According to Winfrey, The Little Light House is an institution whose approach is unique not only to Tulsa, but to the world. Sixteen local colleges and universities send students to The Little Light House for practical experience in various degree programs including Nursing, Special Education, Social Work, Physical Therapy, Occupational Therapy and Speech Therapy. The school has played host to delegates from more than 24 nations, among them quite a few professionals from China who serve orphanage populations. Faculty conducts summer camps remotely in places as far-reaching as Russia and Estonia. In March, some of The Little Light House teachers will travel to Honduras to work alongside a church.

Another benefit of the expansion will be enhanced facilities for the unobtrusive observation of classrooms. Because of space constraints, the school is currently only able to host 20 observers daily; the new facility will potentially quadruple that number. By exposing more students and professionals to the curriculum, “our goal is to really change the paradigm as to how people look at individuals with special needs,” Winfrey said. “We want people to see our kids as typical kids who have the same feelings and desires as [any other child].”

And indeed, in addition to the therapeutic and educational aspects of a Little Light House student’s day, there is a great emphasis on building self-esteem. For Dena Marshall’s 3-year-old son Roman, who was diagnosed at birth with large melanocytosis nevus (a skin condition), the Little Light House staff provides constant praise and encouragement. Wherever her son goes, Marshall notes, people will pay attention to his physical differences. But at The Little Light House, “they say, ‘you are so handsome, you can do anything,’“ she said.

But how does The Little Light House do this all free of tuition? “We know in our hearts it is the good Lord,” Winfrey said. “We live in a very giving community. Tulsa is known for [its] philanthropic support of many different causes.” With estimated costs of $31,000 per child per year, The Little Light House is completely privately funded and also requires families of enrolled children to devote significant volunteer hours.

The Capital Campaign that launched its private phase in 2010 has been hugely successful, says Winfrey, but a balance of $4.5 million remains. The gap money, slated to fund a total update of the original facility and build a sensory garden designed for the children, has a promising start with a pledge grant of $250,000 from the Tandy Foundation. But, it’s not the big donations that keep the doors open, she notes, “it’s the $10, $15 or $20 per month from people who have been faithfully giving for the last 40 years.”

With the opening of the expansion, The Little Light House is preparing to mark an exciting new chapter in its existence. For Winfrey, who has worn many different hats since she began volunteering there in the 1970s, the transformation from a tiny, family-run school to an internationally acclaimed institution is easy to explain. “To look back over the past four decades and to see all that has taken place, in my heart I know it is God,” she says.