Queue the music: “It’s the most wonderful time of the year.”

Halloween has been my favorite holiday for as long as I can remember. Christmas was the holiday you said you loved because you had to because it was the holiday of good children. Christmas was incredible, but it was all about being on your best behavior, a way for parents to extort their kids. Santa Claus was leverage they held over your heads for two months, and then when Christmas finally came, the expectations didn’t stop. There was the school musical, which I had to squeeze my pudgy belly into oppressive red tights for, the church events, which required itchy velvet dresses and uncomfortable patent leather shoes.

But Halloween was pure. You got to become something wonderful, another person other than yourself, then surrounded yourself in deliciously spooky stories and imagery, collected candy, and ate consequence-free trash sugar you hadn’t even earned for the next week, maybe longer.

When I was a little kid in the eighties, most working-class family kids wore plastic, mass-produced costumes their parents picked up at the grocery store–rigid plastic shifts that tied in the back like hospital gowns with plastic masks that looked dark and creepy even if you were dressed as a Care Bear or a Smurf. One year, I went as Strawberry Shortcake. Another year, my brother and I went as Big Bird and Cookie Monster. We felt like a million bucks, but the polaroids are terrifying.

We’d grab our plastic orange pumpkins, which were pretty much what the kids use now but a slightly different type of plastic–everything was more rigid then–and head off around the neighborhood. One year when I was very little, my dad dressed as a red devil and walked with us, the crisp leaves under our feet.

Now that I have my own children, I love sharing Halloween with them. This weekend, we piled into the car and headed down to the Castle in Muskogee for their Halloween Festival. 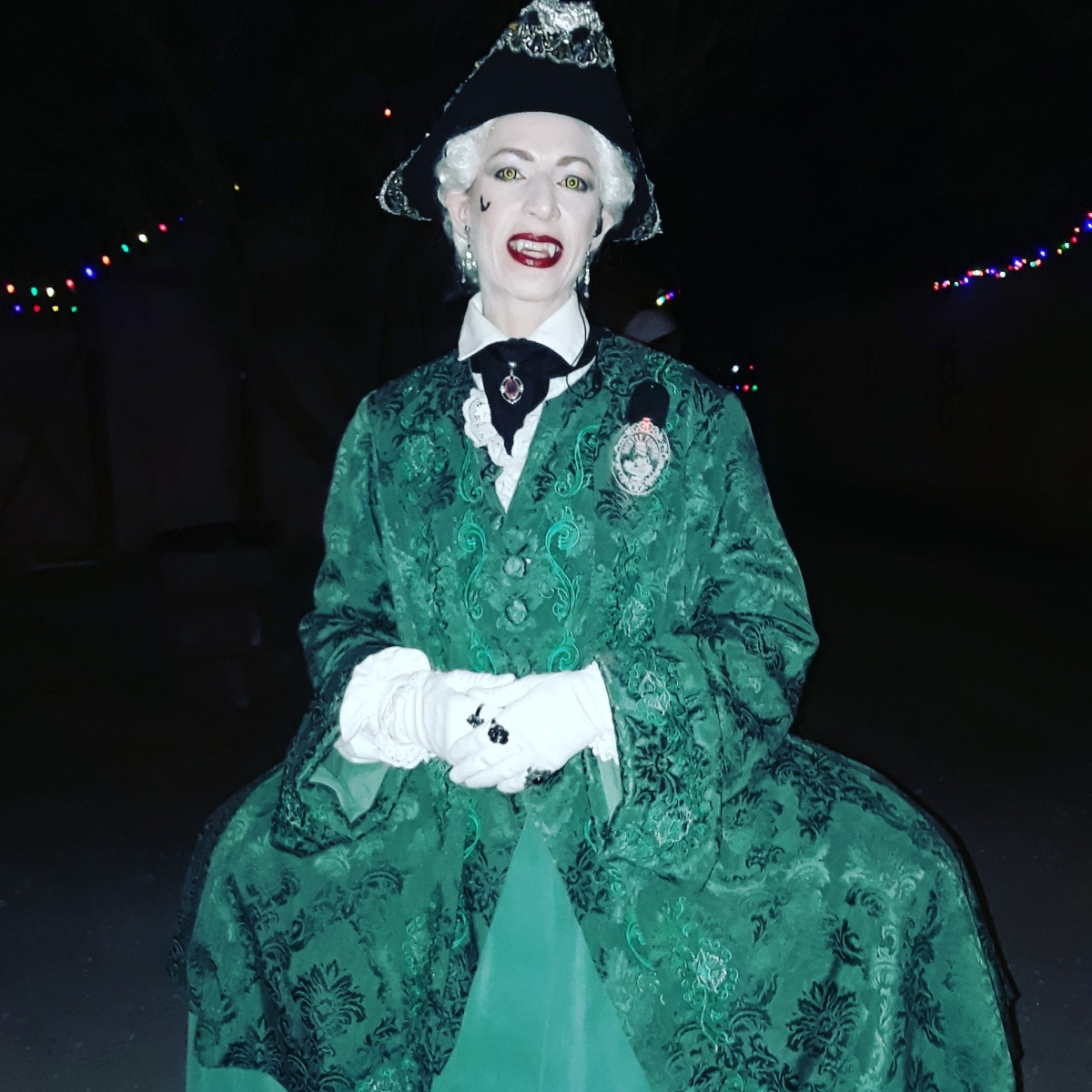 If you live closer than we do to the Castle, it would be worth driving out there every weekend in October to just hang out. Unlike the Renaissance Faire, which you pay an admission for, the Halloween Festival offers completely free admission and parking, charging only for the individual events. This means you can show up and enjoy the festive atmosphere and shops without pressure to see everything all at once. You could come for a kid-friendly night where you stick to the sub-Goosebumps scares and then return later on when you have a babysitter for the more adult thrills. We talked to a couple who had purchased a bunch of event tickets but were going to save them for next week because they wound up having such a great time in Castleton.

There are all kinds of cool activities going on in the Castleton area:

Traumatizing the Kids at Casa Morte​

All of the events are rated on a skull system. One skull means it is not very scary. A three-skull rating means it’s probably the limit for most little kids. Five skulls means it will scare the funnel cakes out of some adults.

This year’s visit was a little tricky because the boys are hitting the age where they are ready for some serious Friday the 13th-level scares, but Lucy, our resident horror gaming fan, is apparently still very much at the cute pumpkins and kitty cats Halloween stage, a fact that we learned the hard way after making the serious parental miscalculation of thinking she could handle the four-skull Casa Morte.

In our defense, Arthur and Noah went on the Disney World Tower of Terror ride when they were five and still talk about how epic it was to this day, and Lucy manages to watch some pretty scary stuff on TV without freaking out. Casa Morte is one of the indoor activities and is basically a walk-through haunted house. It wasn’t the monsters, ghosts, or ghouls that scared her. It wasn’t the twisted clowns.

It was the roomful of ugly dolls that messed her up.

“They had creepy eyes like the dolls that come out at night and stab people in the heart and eat their hearts,” she later told me.

Instead of a swear jar, our family should just have like a Future Therapy jar.

Frustration in the Ultimate Maze

After that, we kind of had to find a balance. I took the boys into the Ultimate Maze, which I actually think Lucy would have been fine with because it’s very light on monsters and heavy on walking around in circles and frustration. The little ghoul at the entrance told us that anyone who doesn’t want to be frightened can carry their “security” skeleton cat or bat as a signal to the monsters, but Lucy wasn’t having any part of a skeleton cat or scary bat, so Justin volunteered to stay behind with her. 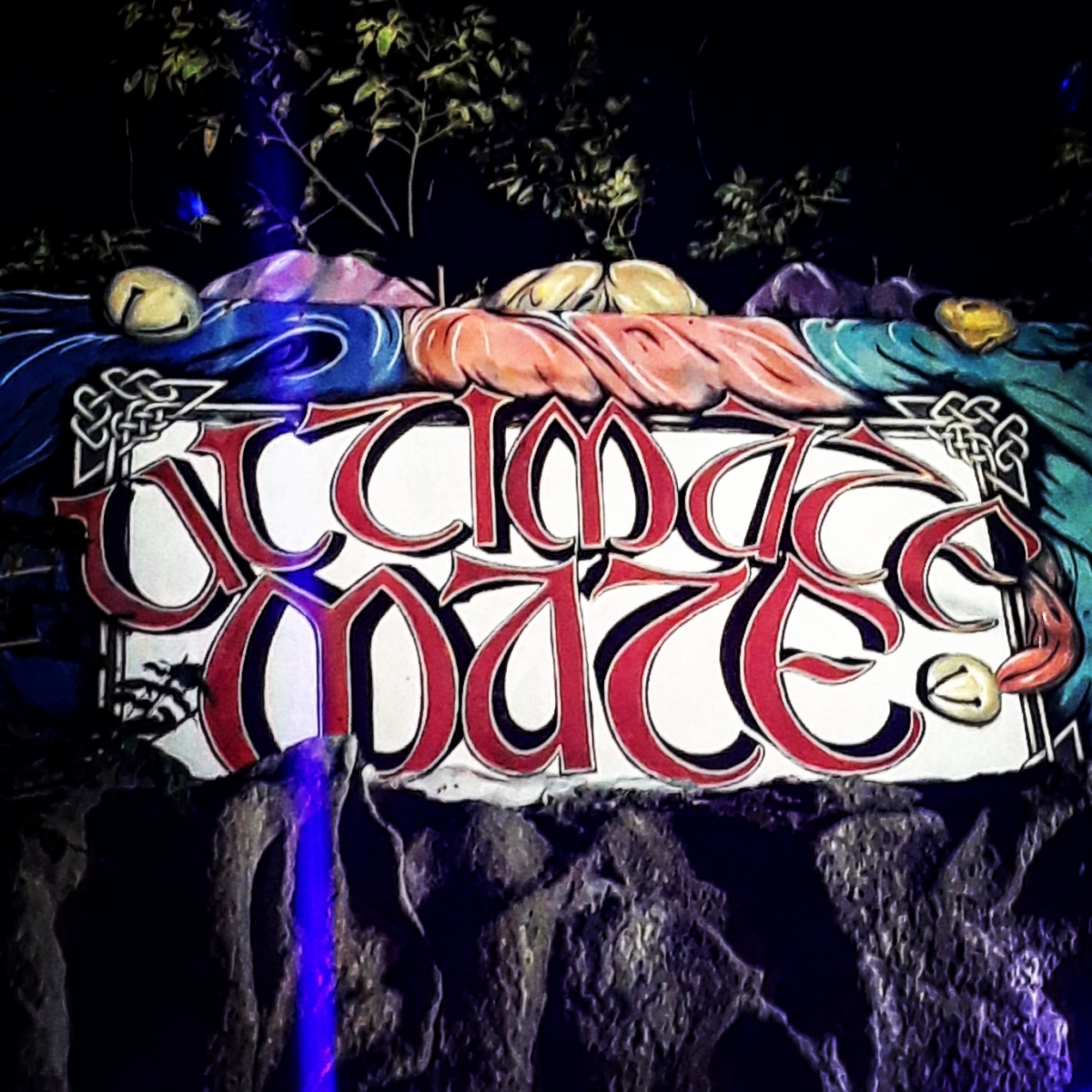 I think the maze would have been a lot more fun if everyone was with us, but I think the boys and I really wanted to hurry up and get back to our people, and this maze is not a quick activity. It’s actually a great way to spend your time if you don’t have a huge budget and want to spend a lot of time on an event that lasts.

“Follow the green lights,” one of the castle spirits told us. But then we reached a point where there were no more green lights, only blue to one side and yellow to another.

My best advice for the maze:

Amblin-level Fun on the Haunted Hayride

We finally escaped, meeting up with Lucy and Justin and heading to the Haunted Hayride. This was generally a crowd-pleaser. Our host introduced herself as a vampire slayer, which the kids loved. The scares were PG-rated–mellow but spooky enough, ranging from colorful, glowing radioactive zombies to a dragon’s lair. It was just north of Goosebumps on the fear-ometer, which was perfect for both my scaredy-cat and my Stephen King-loving preteens.

Arthur liked the interactive quality of the hayride. Maybe it wasn’t as scary as he would prefer, but he loved the way our vampire slayer addressed her guests and involved them in the experience. 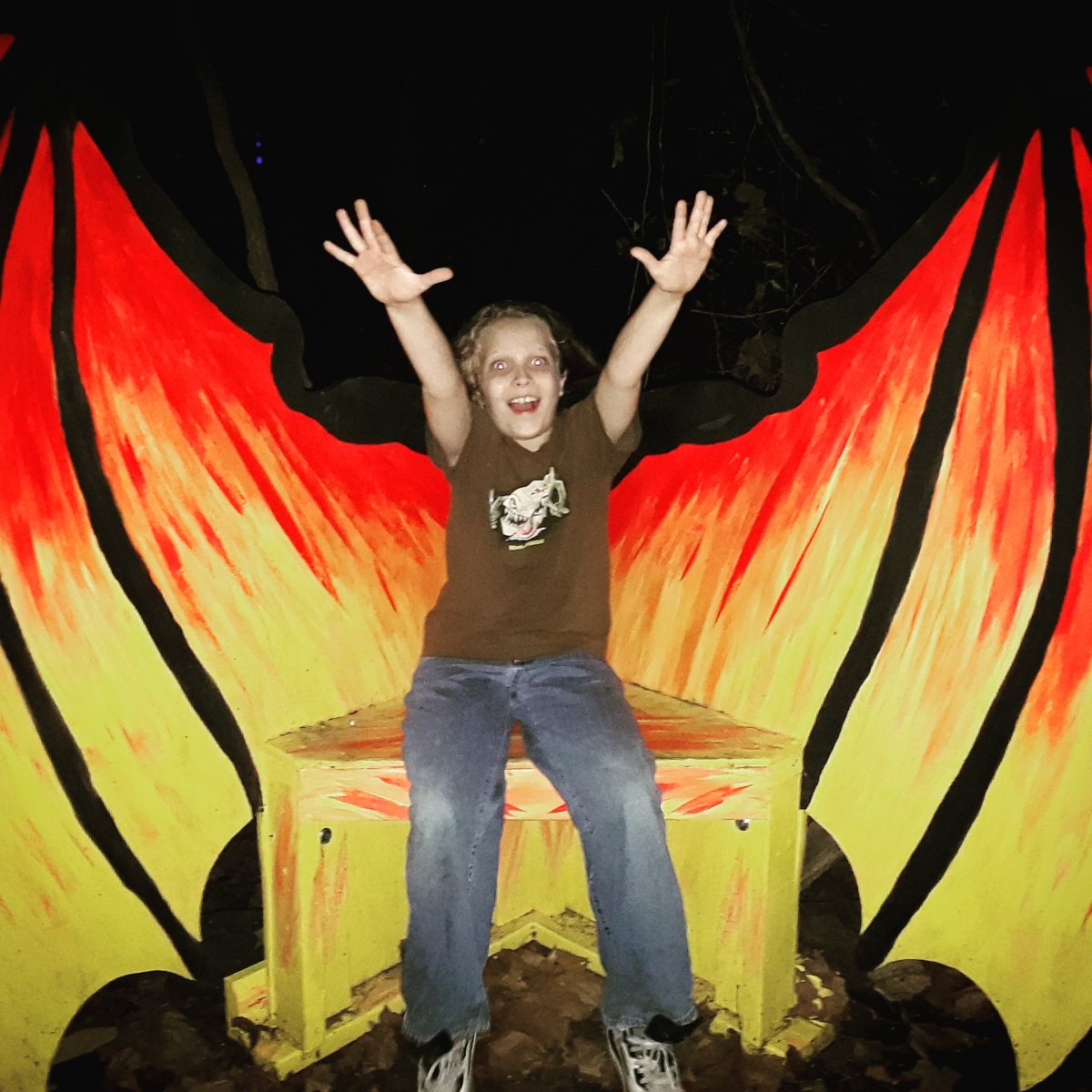 Enchantment on the Boardwalk

After that, we stopped off at a couple of shops. We shared a funnel cake, checked out artisan vendors, and browsed Halloween merch–there’s a one dollar costume shop! 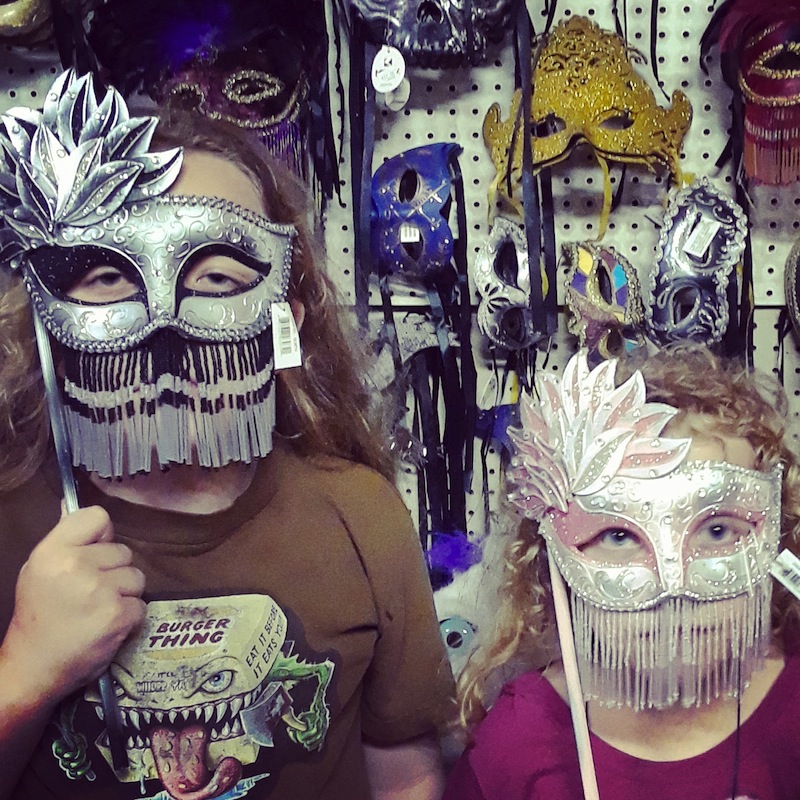 As luck would have it, Majikah Perfumerie, the awesome vendor that sold us the little geek-themed hand-crafted potion pendants we fell in love with at Tokyo in Tulsa, was there. I bought a refill bottle of lilac oil, a Sailor Moon potion bottle for Lucy with cotton candy-scented oil, and a vial filled with a crystal and florals I had wanted at Tokyo in Tulsa, which I filled with lavender and vanilla oil. All three of these little vials were only $25 total. If you’re looking for a magical holiday gift for the geeks in your life, you really need to find these folks and stock up. It’s hard to choose from all the amazing potions and pendants.

After we finished shopping, we headed over to the Enchanted Boardwalk, which I had always wanted to check out. This is a darling activity for all ages in which the boardwalk area is aglow with magical lights and lighted inflatables. Although it makes a fun family activity, it could easily be a romantic walk for a Halloween-loving couple. For the right goth kids, the Enchanted Boardwalk could be the perfect proposal spot–just don’t forget to tag me in your Instagram video.

Everyone over the age of ten in our family was dying to do the Dark Tower Zombie Hunt, but we decided to save that for a later date. Arthur, Noah, and I had one last activity to check out–the Domus Horrificus. This fun little walkthrough includes a sendup to pop culture horror flicks along with other popular monsters and ghouls, and they always do a great job. They started off with the Purge, which I have not seen but apparently has its own cult following. However, having just seen American Horror Story: Cult, the stars-stripes-and-terror theme still resonated in a chilling way.

Freddy Krueger was there, along with some disturbed clowns, your basic spirit-o-the-well, and loads of random ghosties and ghouls. For me and the guys, it was the more cerebral or mindbending stuff that we found scary–the fog and lighting combo that made it impossible to see anything, the black fabric inflatables you have to squeeze through that seem to go on endlessly, instilling a sense of dread. I am actually surprised Noah did so well with it with his processing issues, but he was amazing. He was ready to go again.

Although the Domus was rated one skull higher than Casa Morte, the boys did not find it dramatically scarier.

All in all, it was an awesome night out for our family that totally got us into the Halloween spirit. We’re ready to deck the halls in boughs of pumpkins. 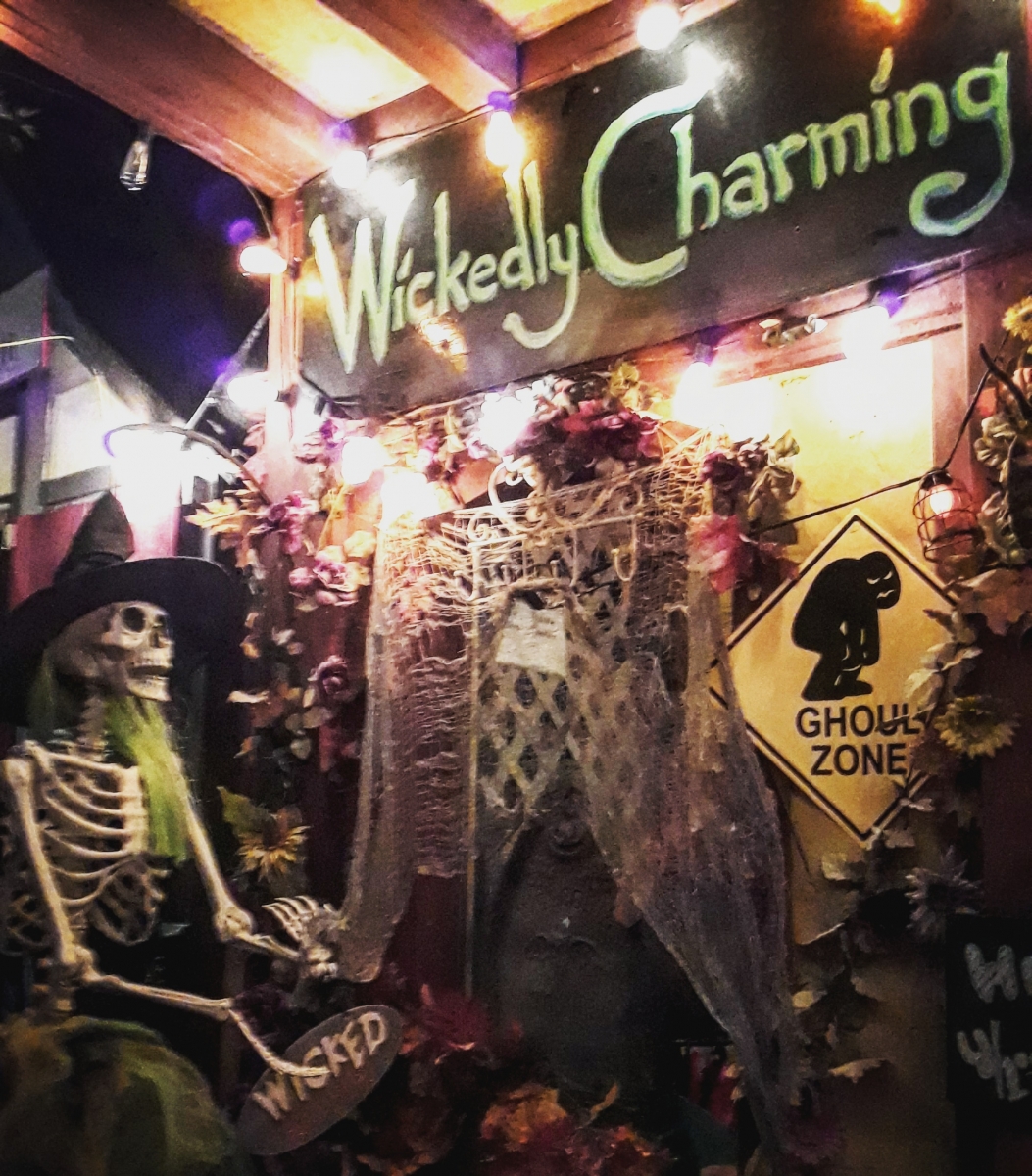 If you visit the Castle, don’t forget to stop and fill out the visitor survey on the way out. It’s good for a buy-one-get-one pass for the Renaissance Faire in May, which is one of our favorite events of the year.

Here’s a quick list of the Castle events and prices:

The event is every weekend through October 27th starting at 5:30. Ticket sales end at 10 p.m., but the events go pretty late, with the outdoor events closing up last.

Comment below with your favorite Halloween memories, and happy hauntings! 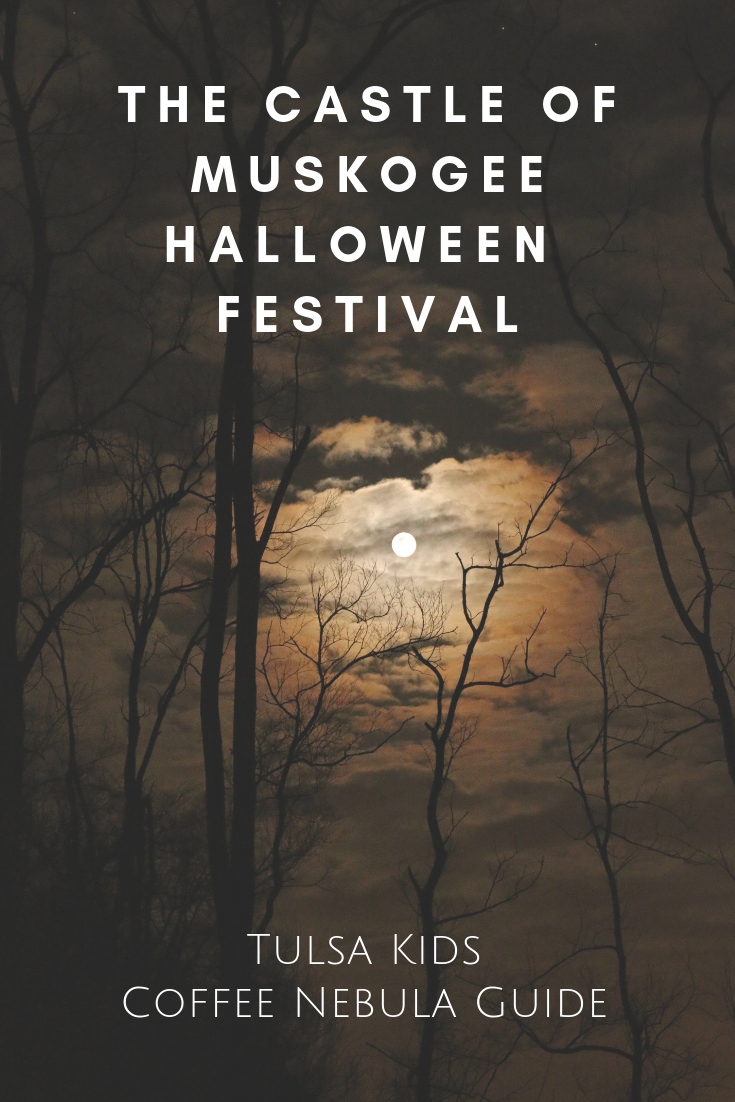