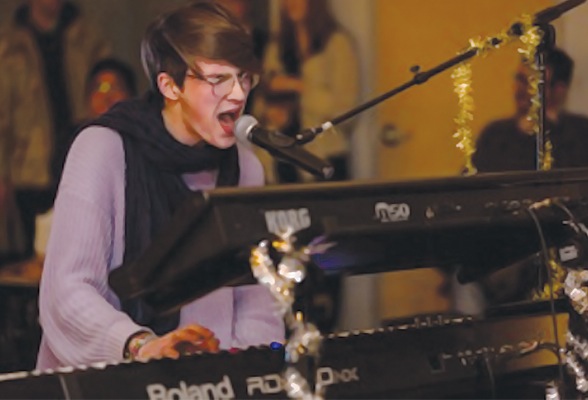 Some kids aspire to be doctors or lawyers, while others hope to someday be a teacher, an artist or even an NBA star. At Riverfield Country Day School in Tulsa, some music students aim to be rock and roll stars.

Stroll through the Riverfield campus on a school day and the odds are you will hear a resonating thump, thump of a bass guitar followed by a sudden clash of a drumstick on a cymbal. Riverfield’s Rock Band program, housed in its own building in the middle of campus, lets students “release their inner rock star,” said Paul Knight, the director and brainchild behind the unique music curriculum.

“We have over 100 fourth through twelfth grade students involved in the program now. That’s practically a third of our school playing in bands,” said Knight, who received a BA in Music from The University of Tulsa. Knight’s primary instrument is percussion, but he also jams on guitar and vocals with his students.

Knight started the program from scratch in 2005, fielding one band that first year.  There was not another in-school rock band program to model after, at least not in Tulsa, so Knight set out to create a music curriculum that captured a teen’s musical interest.

“When I was hired, it was just an idea to take the music program beyond the usual strings, band and vocal programs. Why not rock, we thought. It is what kids love, and they can really be motivated if they play what they listen to,” he said.

Knight utilizes modern and classic rock music to teach the fundamentals of music performance theory and music composition. He also teaches a History of Rock and Roll class.

The music the students perform, he said, must be educational and involve different musical instruments and theory. “I want the music to be a bit more technical, challenging, heady and unique. I want to challenge my students’ creativity.” The bands dabble in today’s popular indie and rock bands such as the Arctic Monkeys, Coldplay, Sleigh Bells and Muse.

Students also learn about the music business. Rock Band members have had the opportunity to observe and assist road crews of famous bands and musicians who have played the BOK such as AC/DC, Paul McCartney, Roger Daltrey and Eric Clapton.

Every year Knight reshuffles the bands, placing his students into new bands in order to challenge them to adapt to new sounds and different band mates. The students name their band and each band, he said, takes on a unique personality.

“I put the kids in different bands each year in order for them to learn to make a situation work. Playing in a band is like being in a boardroom. You have to work with others and take the project from beginning to final performance.”

Each year the bands spend late fall and early winter preparing for the Riverfield Rocks concert held at the Cain’s Ballroom. Leading up to the concert, the bands practice feverishly to perfect their sound. During a Tuesday afternoon practice session, Jean Pool band member Wyatt Sanders, counts down as he plays the opening guitar riffs of an Arctic Monkeys song. Sanders started playing the piano at the age of five and gradually learned other instruments. He plays electric guitar in Jean Pool, writes his own music and plays in several bands outside of school.

“I plan to continue music beyond high school. It has definitely become a part of my life”, said Wyatt, who will attend Berklee College of Music in Boston, Massachusetts next year.

Junior Holden Grissett is one of Jean Pool’s drummers. This is Grissett’s first year to participate in the Rock Band program.

“Holden is jumping in to the band program a little later then most students,” Knight said. “But he is getting better. He gets a lot of support from his band mates.”

Knight speaks to his musicians like an athletic coach rallying a team before a big game. He moves from band member to band member, adjusting an amp, tuning a guitar or sharing a microphone to sing. “Have confidence,” he encouraged. “Play it naturally and relaxed. When in doubt, play less. Feel the music. Play organically.”

Knight has spent countless hours on stage performing before audiences. He understands the pre-performance jitters. “The adrenaline will start pumping when you get on stage. Use it,” he told the class.

On the night of the concert, 10 bands performed to a clapping and dancing crowd of over 900. Knight said everyone from musicians to parents worked together to put on a successful rock show.

“I thought that it went fantastically well! Everyone worked together to make the transitions between bands occur quicker and smoother than many touring bands have between songs, much less entire groups. The professional crew at Cain’s was pretty blown away by that. We had four adults and several students working behind the scenes getting bands up and down, tuned, excited and calmed.”

Many musicians’ “inner rock star” shone.  “I also enjoyed the students who opened up to the point where they felt comfortable enough to jump off the stage and get on the security rail,” Knight laughed. “It was an amazing night for us, and a transformative night for many of the children. The musicians were as close to floating as one can come the following week at school.”

Riverfield Rocks, as well as the Rock Band’s spring outdoor concert, Llamapalooza (named after the school Llama that grazes in a field near the entrance of the school) are not only avenues for students to perform but also fundraisers to keep the program rocking.

“This is what most bands do. They perform for money to help them exist. They pay for the next show with funds raised from previous shows,” Knight said.