Phone Games to Play With Your Kids

If you’ve ever experienced the dismay of realizing your children are all glued to games on their phones or devices, you know how frustrating it can be to watch your kids get so completely into something that keeps them isolated and screen-focused. I don’t know many parents who have no concerns about their kids’ screen time these days, especially when the kids are still in that phase when (let’s be honest) screen time is the closest thing to respite many parents are going to get.

As a child of the ‘80s, I grew up pretty attached to my Atari, so I tend to be a bit less restrictive about screen time than many parents. I have a handful of phone games I like to play, especially when I need to pull myself out of an intense headspace and just purely zone out for a few minutes. And let’s be honest—some of these games are pretty freaking fun. 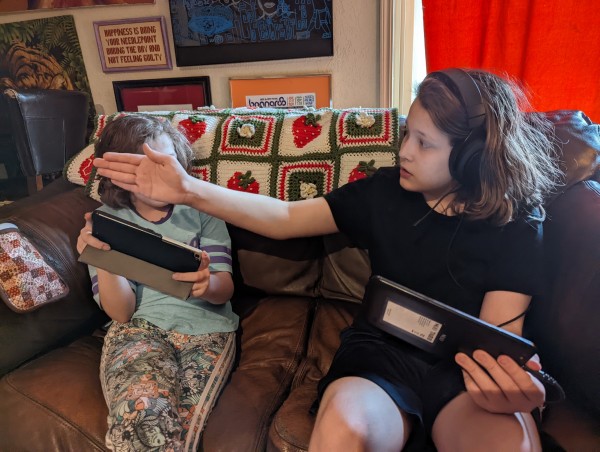 Still, there’s something a bit unsettling and low-key dystopian about sitting in a room with all of my kids with each of them immersed in an electronic device. That’s why when Lucy, who loves doing the Wordle with me as a team, first asked me to download a game to play with herself and Arthur, I was more than happy to. And there are a surprising number of games that can be played with several family members on their own devices.

If you’re like me and you feel like you’re competing with your kids’ devices for their attention, try downloading their favorite multiplayer games and playing with them. My kids absolutely love this because I’m experiencing something from Kid World, and they’re getting to share something they love with me. Obviously, the best way to get started is probably to ask your kids if there’s a multiplayer game you can download and play with them. But if you’re not sure where to start, here are a few of my kids’ favorite free multiplayer games for you to check out with your teens or tweens. 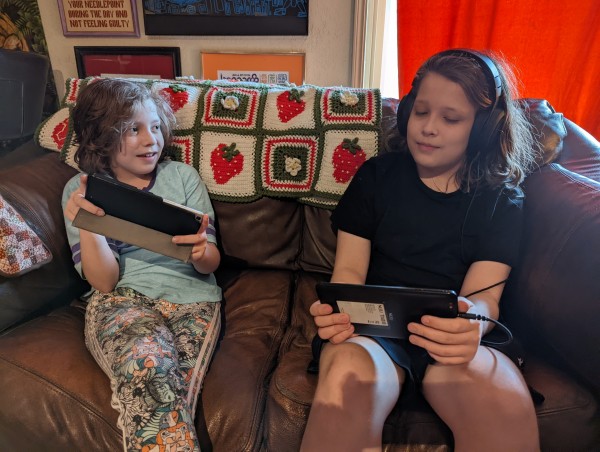 I absolutely love playing this game with my kids, This game is completely silly, but there’s a surprising amount of strategy to it. Super Auto Pets is a versus game where players can play in an arena against random strangers or create their own private match for up to 64 players, which means your whole family can play together.

Each game is played over several rounds where players create teams of up to five little “pets” with different health levels and battle capabilities. For each round, players are given 10 coins, which they can use to either purchase a pet or feed it different food items to add to its abilities. For example, a duck comes with 1 damage and two health, and when you sell ducks, each shop pet gets 1 health. You can purchase an onion for your duck to give it onion armor or a bee, which allows your duck to spawn a bee after it is attacked.

After working on your team, players will play in a match where the two animal teams line up facing each other and battle on autopilot. At this point, all you can do is hope your clever team development strategy will pay off as you helplessly watch your fish, mosquito, or cow get beat down by various horses, peacocks, and spiders. After each match, you get another 10 coins and a chance to sell and replace pets or strengthen them. Depending on how you set up your game, your private game will continue until only one person is left with lives.

When I first started this game, I found it incredibly frustrating because my kids were just brutally assaulting me in match after match. Eventually, I started to realize that certain combinations of pet abilities can stack up to create a powerful team, and the process of building your team can be a whole lot of fun but also fairly challenging. And one of the things I love best about this game is that everyone ends up talking to each other while they watch their animals battle.

Unless you’ve been living under a rock, you have probably heard of Among Us or seen the weird-looking little colorful astronauts plastered on various merch. Kids love this game, and they especially enjoy the interactive experience of playing with other people they know.

Among Us is a multiplayer game set in space, and the goal of the game is to find out who the imposter is before they kill off everyone else on the team. Like Super Auto Pets, it’s easy to create a private game that other family members can join with the right code. When a match starts, you’ll be assigned a role as either a crewmate, engineer, scientist, or an imposter role. Crewmates with responsibilities will need to complete their tasks without the imposter killing them, while the imposter’s job is to kill everyone without anyone figuring out who they are.

To play a private game, you’ll need at least 4 players, so if you have a small family, you’ll need to recruit some cousins or friends. Up to 14 players can participate in a private game with the most recent update, so it’s a great game to play if you’ve got a big group of kids to entertain.

If you haven’t yet downloaded Pokémon Go, you should. Pokémon Go uses augmented reality (AR) and your GPS to allow players to “catch” Pokémon everywhere they go, and you can friend other players using your trainer code. You can look for Pokémon anywhere you go, which means you can be at the park or out on a walk and pull out your devices to look for the little guys. And it’s a great excuse to get out and get some exercise together as a family. After you’ve caught a few Pokémon and reach a certain level, you can even battle your friends and trade Pokémon.

Words With Friends is basically Scrabble. One of the things I love about playing Words With Friends is the ability to play while doing other things. You can just pop in, play a word, and then come back later when you’ve got more time on your hands. And since you can keep several matches going at once, it’s easy to play with your entire family while they’re playing against each other. And as a bonus, your kids will be working on their language, spelling, and vocabulary while they play. 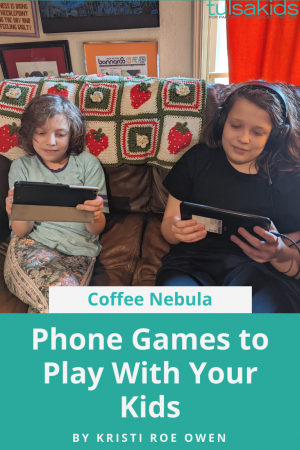