After a balmy week last week, we’re back to January weather just in time for the kids to be back in school. Sometimes things do work out. If you read my last blog, you know I’ve been trying some new things — like Zumba! Ha. My daughter Mary and I went again last night. I don’t know if it’s that driving Latin beat or what, but I had the urge to paint something red over the weekend. (That was after Mary and my husband nixed my idea to paint my kitchen cabinets black. Mary’s comment was, “Do you really want a Goth kitchen?”) Here’s the thing, I would then add a red countertop. Oh. Much better.

Well, that kitchen stuff was too much work, so I decided to paint an old farm bench that I’ve had in my entryway for a million years. I like that bench, but my house is decidedly mid-century modern, so it doesn’t really fit my decor. So I hauled it into the garage and painted it red. Mary got inspired and helped me paint. There’s something about painting something red on a dreary day that can really turn your attitude around. I’ll take a picture of it and put it in another blog.

After we painted the bench, we went to Target and got these very cool cushions with a red pattern (on sale!). Then we tried to go to my favorite used furniture store that has cool mid-century modern stuff, but it was closed, so we tried the place across the street and I got the hippest lamp. My husband wanted to steal it for his office, which surprised me since he never shows any interest in decorating anything. (This is a man who lived out of his suitcase for two years after college.)

So, you know how changing one thing in your house can sort of make you re-evaluate the entire space? Well, I felt  like one of those designers on TV. I put my red bench back in place, threw on the pillows, pulled a chair over and put a floorlamp nearby. It made me happy.

But what to do with the new cool lamp? I moved a small table over near my couch and put the lamp on it. Perfect. I happen to hate overhead lighting, so it made a really cozy spot.

I think painting something red inspired Mary, too. This is her last week home before she goes back to college. She’s been doing some painting of her own this week. She did this painting yesterday (on the right): 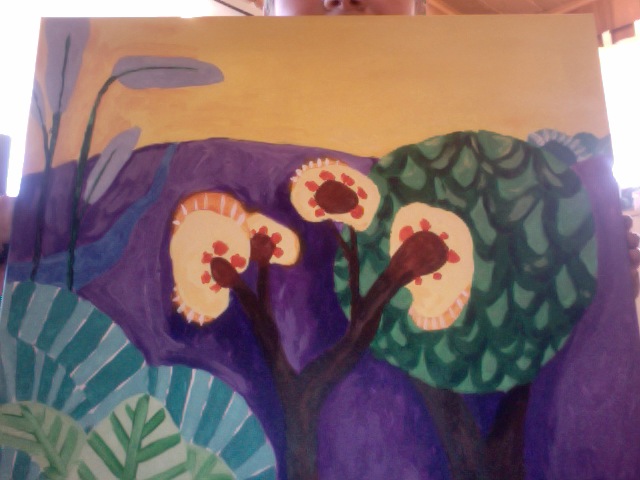 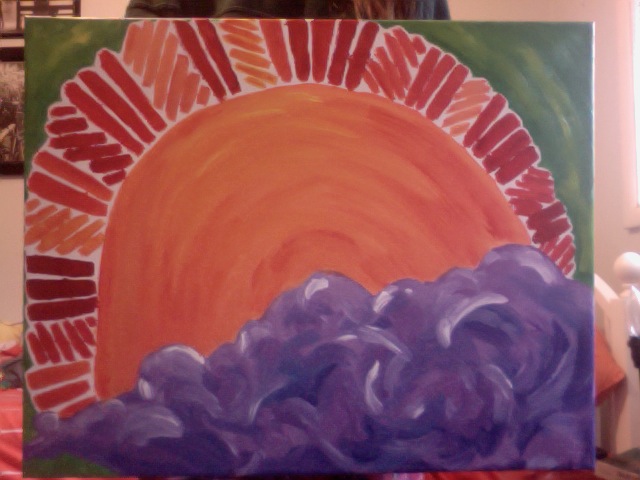 Then she did the one on the left today. (She emailed these photos from her phone).

The paintings make me happy like the red bench and the amazing moon that I saw when I was out running with my dog early this morning.

Maybe we should have a day in January called “Paint Something Red Day.” I promise it will make you smile.