Of Puzzles, Porcupines, and Boundless Love

Going from raising one child to raising three--one of which is on the autism spectrum--was challenging but taught us something profound about family: We are all in this together.

When I say our third child was a surprise, I mean it quite literally. I don’t mean we were “not trying but not not trying” as friends will often say. I mean that as cold and unfeeling as the vast, random universe can feel, out of the dark and unyielding pain of loss and grief, the wheel of fortune brought a child into our lives we never expected at the age of three years old.

When Arthur was born, we were exceptional parents. Everyone would say, “You’re such cool parents,” and I would beam at the compliment. As first-time parents often do, I dressed him with great attentiveness, in his case a carefully curated wardrobe of Beatles and Pink Floyd T-shirts and funky little pants and baby leggings.

Friends, I really had my stuff together. I was a parenting genius. We would go out to dinner at any restaurant we chose, the three of us, our smiling, round-faced Arthur with his little trendy but poignant statement bib and me with my matching diaper bag and sling.

When we took that child to Bonnaroo Music Festival where he took his first steps during a Wilco set, we knew we had achieved next-level parenting and certainly deserved a cookie, if not a trophy.

Friends, if Three Kid Me saw One Kid Me, I would probably laugh at her while stealing her Good Mom cookie.

Perhaps because we were such magical parenting geniuses or perhaps because pregnancy alters your brain chemistry in bizarre and confusing ways, like so many parents, we decided to have a second kid. Like the trophy-holding parents we were, we timed it perfectly: Lucy came along three years and two weeks after Arthur.

And thus it came to pass that we were finally getting a taste of the full LOLness of the universe at our silliness as we struggled to balance two children in diapers with full-time jobs, passing kids back and forth across cars as my day job ended and his night job began, arguing over who changed the most diapers and who wasn’t holding up their end with laundry. But friends, at that point, we ain’t seen nothing yet.

Soon after Lucy came along, my only brother, a single dad raising his son alone, asked us to help him out with Noah while he worked on a plan to make a more stable life for the boy. It was becoming apparent even at that early age that the boy might be on the autism spectrum, something my brother was quick to acknowledge. It was in the little things, things that make clinicians pause and admonish parents not to assign meaning to, but we knew, just as my brother knew from watching his son that he had himself been on the spectrum his entire life without knowing it.

Back then, it was subtle, but we could see it. Noah’s food couldn’t touch other food on his plate. He developed an early, complex vocabulary but was unable to progress to sentences. His eyes were a brilliant sapphire, an amber gem below the right pupil, but he was incapable of holding someone’s gaze for more than a fraction of a second.

The more Noah’s behavior patterns unfolded, the more Jeff saw of it in himself. As a child, he’d struggled profoundly to socialize with other children, and even as an adult, he said things that were “off”–slightly inappropriate or delivered in a way that unsettled people. He did not do it on purpose; he sincerely could not perform the nuanced social interactions that most of us take for granted.

My brother had been unable to write well or even hold a fork correctly his entire life; as a child he was labeled the highly stigmatized “LD” (Learning Disability), something for which kids would brutally bully you for back in the 80s, even though his intellect easily outstripped mine and most people I know on any given day. He’d hoarded electronics and taken them apart, sketching circuit boards and schematics in dozens upon dozens of notebooks, a compulsion our mother discouraged with regular beatings.I often mourn where his life might have gone if he had been identified on the spectrum as a child and endowed with the tools to nurture his unique and dazzling mind.

When he asked us to take Noah full time while he worked to gain stability for the two of them, of course we said yes; I would have done anything for that man. We took temporary guardianship of Noah, but Jeff moved two blocks away from us to help with his son, and this was a man who always showed up for his son. Jeff was doing well. He met an amazing woman. They got engaged, made plans for the future, but he wanted to do right by his kid first.

In the midst of this, the unthinkable happened. Shortly after we received custody, my baby brother, my best friend in the wide world, with his Big Lebowski vibes and endless devotion to me, died unexpectedly of sepsis at age 33.

We had been inseparable most of our lives, the two survivors of a troubled marriage and an abusive, mentally ill parent. My brother had been my constant companion. He was a man who accepted the hand he was dealt by bringing the party. When I had to shop for clothing, a chore my husband would groan over, Jeff would go with me, making jokes and playing with everything in the store. Where he struggled to interact with others, I found him hilarious, witty, and profound.

The grief was devouring. It turned me inside out, drew me into an endless black chasm of pain by night.

But by day, the swirling eddy of parental chaos drew emotions from us we did not know we had the capacity for. Do you know what it’s like to fit three car seats into the back of a Suzuki Aerio? Freaking awful. If you don’t get them perfectly geometrically lined up, you have to bounce your backside against the door until it fully pops closed. The next year was a blur of desperate, fruitless potty training attempts and unplanned triple-up cosleeping, all underscored by a series of financial struggles resulting from my husband’s recent layoff and sandwiched in between 50-hour work weeks. 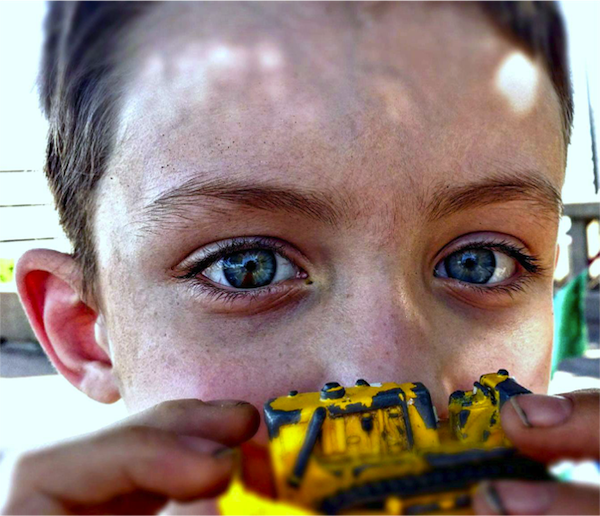 And through all of it, Noah’s traits were becoming more pronounced at an almost exponential rate. Over the course of that year, what first seemed to be mere quirks seemed to escalate rapidly until at last, they nearly eclipsed everything else in our lives.

While Arthur and Lucy would wrap their bodies around us, cuddling into us like George onto the Man in the Yellow Hat (because what is Curious George but an analogy for a toddler?), Noah was stiff, awkward, resistant. He wanted the love, but it was difficult, like pieces of a puzzle you couldn’t get to quite fit. “He was like a porcupine,” I recently told my husband, reflecting on it. “Prickly.”

He would bang his legs against the frame of his bed, leaving a rainbow of bruises across his shins, deep purple, pale yellow, everything in between all at once. I feared the day someone would call us in for abuse based on those bruises, but I couldn’t make him stop.

Noah compulsively touched things and people, spun around, made noises. He lined up his toy cars in precise order, and if another child moved or altered the pattern, he exploded into a thousand violent catastrophes. He called them “puzzles,” nomenclature offering a rare glimpse into his fascinating worldview. 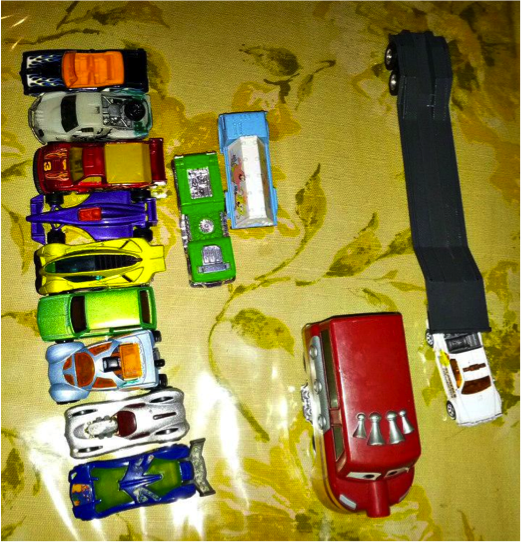 He repeated words and sounds over and over until you wanted to scream.

I loved him profoundly, but it is painfully hard to bond with a child who won’t look you in the eyes and has difficulty with touch. Our bodies are wired to connect to our children through these types of interactions. My heart ached to connect with him. To my deep and secret shame, I sometimes felt ambivalent about raising him, buried deep in the recesses of my heart.

There was a time when I would sob guiltily, wondering if I was giving the other children the love and attention they needed. Noah needed so much, and maybe we weren’t good enough. Were we failing, messing up these three beautiful kids? Would they resent us? Would they struggle to form meaningful relationships because of our terrible parenting?

Many waters, many bridges passed.

Today, Noah calls us “Mom” and “Dad.” Today, he’s the guy who will perk up when the subject of autism comes up, a nine-year-old ambassador to neurotypicals willing to patiently educate them. He does well in school, takes great care of his younger sister the way I did his dad, and gets along well with other kids his age. He is the child who will ask me if we can watch Star Trek together when I’m having a rough day because he knows it means everything to me.

He is the only of my three children to master the secret language I spoke with my brother.

The journey from that place of rainbow bruises and incessant yips to where we are today was long, but this post is not about that journey.

This is about the fact that although we couldn’t see it, things were always getting easier, slowly, gradually, until one day the scale tipped and we were on the lighter side of things. This is about how they can get better, they did get better, although back then it felt like our lives had halted and we were sinking in the quicksand. Sure, part of it is the kids getting older, but any parent of teens will tell you parenting is trading challenge for challenge until you finally trust your child to the world, and poetically as it seems, everything is amplified with autism.

See, it was never Us the Parents trying to raise Noah the Child with Autism and abandoning the other two.

It was always only ever all of us, the five of us, doing our best together.

Together or not at all.

This is my love letter to those of you who are in the thick of it, those who feel guilty, ashamed, drowning, sinking, suffocating. Failing. I don’t just mean with autism. I mean as parents, as families.

Ambivalence and love are not a dichotomy.

When everything seems impossible and the air around you feels heavy and thick, you are never alone because you are a team. You won’t always get it right, but if you are doubting yourself, it’s because you care enough to, and that is what will carry you to the place where things are a little lighter.