Bynum talks about his love for family, history and Tulsa.

Spend a few minutes with Tulsa Mayor G.T. Bynum and three things will be evident: 1. He loves his family; 2. He loves history; 3. He loves Tulsa. 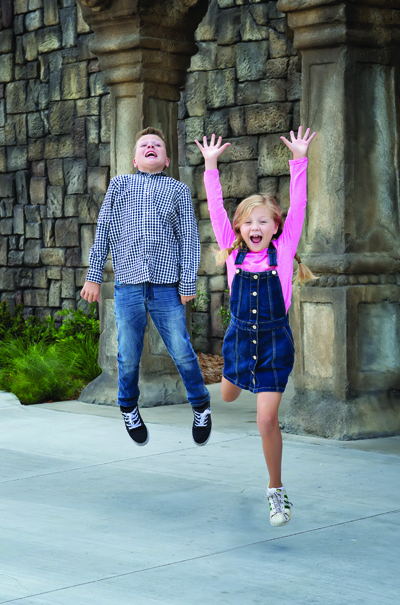 And those three loves are inextricably combined. Mayor Bynum’s family has lived in Tulsa since the 1880s. He grew up in Tulsa, went to Eliot Elementary School in the Brookside neighborhood, and recalls a childhood of neighborhood bike rides and fishing from a paddleboat with his friend.

“That’s the kind of Tulsa I grew up in,” he said, “and that’s a big part of the inspiration for me wanting to be involved in public service now as a parent.”

Mayor G.T. Bynum wants his children, Robert, age 10, and Annabel, age 7, to feel the same love for the city that he feels.

“I want my kids to think about Tulsa as a special place,” he said, “as a city second to none in the country, and to view it as the same place of opportunity when they grow up that I viewed it when I was a kid. When I was growing up, Tulsans still very much had the mindset that we were a world-class city.”

“World class” is an adjective that Mayor Bynum’s consistently attaches to Tulsa.

The mayor’s conversation flows smoothly from his own family history to an almost nerd-like knowledge of Tulsa’s history, easily referencing statistics about everything from population growth during the 1900s to the sociological and economic events that led to Tulsa building its first skyscraper.

Such details are not the stuff for trivia games or interesting conversation, but create context for Mayor Bynum’s policies and worldview. His sincere enthusiasm for Tulsa as a world-class city informs his approach to identifying and solving city problems.

“My overall focus is to get Tulsans to start thinking of Tulsa as a nationally competitive and world-class city,” he said. “That’s the frame of reference from which we make our decisions now. We’re not competing with Broken Arrow and Owasso and Jenks. We’re working with them to compete at a national and international level.”

The second big picture focus for the mayor is growth. “We’re a city that’s growing again,” he said. “Our growth has been very stagnant for the last two decades, and I really think that’s attributable to us not being focused on the growth in the 21st century. It’s national and international.”

Mayor Bynum pulls from history to make his case that mindset coupled with action can create dynamic, transformation.

“I love the fact that we built skyscrapers in downtown Tulsa in the 1920s when there was plenty of land available,” he said. “But they had a mindset that a world-class city had skyscrapers.”

While many might attribute Tulsa’s early growth to oil, the mayor believes that it wasn’t just money; it was mindset.

“I think the reason for that growth is that people wanted to build a city that they could brag to their friends back home about. That brought the best that the world had to offer here to Tulsa,” he said. “When Waite Phillips decides to build his new house, he goes and tours Italy, looks at the villas there, and builds Philbrook. When Mr. Gilcrease decides to collect art, he builds the best collection of Western art anywhere in the world.”

Without action, however, mindset can remain an unfulfilled dream, but Mayor Bynum’s mindset requires, like his forebears, that action be taken.

One issue that “weighs heavily” on him is Tulsa’s racial disparity. While he points to innovations, such as Guthrie Green and the upcoming Gathering Place, that create community by bringing people together from all over the city, he recognizes that specific initiatives are needed to face the hard challenge of Tulsa’s racial inequities.

“We’ve partnered with the Rockefeller Foundation with something called 100 Resilient Cities. There are 100 cities around the world, and 12 in the U.S.”

Tulsa is one of the 12 that received the Rockefeller Foundation grant that provides a resilience director to push the city’s chosen initiative. Mayor Bynum believed that the foundation initially was interested in Tulsa because of natural disasters – floods, tornadoes, and now earthquakes – but the mayor pointed out that there were experts already working on those problems.

“What we don’t have,” he said, “what we’ve failed to make progress on in 100 years are issues of racial disparity. So [the resilient cities grant] allows us to bring in experts from all around the world on this particular issue. If you want to boil it down to one statistic – a kid growing up in north Tulsa today is expected to live 11 years less than a kid growing up in other parts of the city.”

Mayor Bynum notes that Tulsans in every part of the community are outraged by that statistic and want to play a part in addressing it.

Another issue that the mayor feels strongly about is public education. Once again, he pulls from the ghosts of family history to assert his obligation to the city’s schools.

“We’re not going to continue to ignore the issues of education relative to Tulsa, especially at a time when I don’t feel like the state is giving it the focus that is needed.” — G.T. Bynum

“My great-great grandfather was the second mayor of Tulsa, and he ran in 1899-1900,” Mayor Bynum said. “He ran for one reason, which was he thought we should have a public school in Tulsa. He ran, got it built and then refused to run again. That’s the only reason he wanted to be mayor.”

However, mayors often are not heavily involved in public school policy, and Tulsa has been no different. When he came to office, Mayor Bynum found a hands-off approach to public education.

“The city had pretty much vacated responsibility for schools in Tulsa,” he said. “We were providing crossing guards and that was about it. At the same time, the perception of educational opportunity is one of the greatest indicators of a city’s long-term success. So, I decided that we’re not going to continue to ignore the issues of education relative to Tulsa, especially at a time when I don’t feel like the state is giving it the focus that is needed.”

To address the challenge of underfunded schools, Mayor Bynum created an Education Cabinet composed of the three district superintendents, and the presidents of Tulsa’s higher education institutions to advise him.

“We recognize a failure of leadership when it comes to funding schools the way they need to be funded, and we want more ability to deal with it at a local level,” he said.

Mayor Bynum and his education advisors are working on bringing a recommendation to the next legislative session that would allow Tulsa to use funds from a property tax initiative without the state reducing Tulsa’s allocations, as the formula is set up now.

“Local citizens ought to have a say in how we fund education in a community,” Mayor Bynum said.

The mayor also signed an executive order giving any of the city’s 3600 employees time off to volunteer for Reading Partners, a tutoring program that helps struggling early elementary school students. Children in the program have over a 90 percent success rate in achieving reading proficiency. The city will track each student through the end of the year to show the citizens of Tulsa the reading proficiency gains that were made thanks to city employees.

While Mayor Bynum could certainly be away from home every evening, he makes a point of turning down everything but the most important evening engagements in order to be home with his family. Evenings, and especially weekends, are important downtimes for Mayor Bynum and his wife, Susan.

“There are plenty of sacrifices I’m willing to make,” he said, “but I don’t want them to have to.”

In Tulsa, the family enjoys going to the zoo, riding bikes in the neighborhood, and going to local parks.

And Mayor Bynum is trying to get his kids as excited about The Gathering Place as he is.

“We went to the groundbreaking,” he said, “and they were both moaning about it, and I said, ‘You don’t understand. This is going to be the nicest park in America and it’s going to be right here in Tulsa!’ And that blew their minds. We’re going to have the best park in America, maybe the world, in their city, and I love that, because it restores their expectations of the kind of special place that Tulsa is, and it inspires me as mayor to hold us to that kind of standard.”

Mayor Bynum also enjoys sharing his love of history with his children. “One of the goals we have is to take them to every presidential library,” Mayor Bynum said, and then laughs because he admits that it’s more his goal than Susan’s. “The kids love doing it. They loved the Reagan Library because Air Force One is there, and it’s on top of a mountain.”

When asked about his favorite thing about being a dad, Mayor Bynum gave an interesting, thoughtful answer, but one totally in keeping with his historical perspective on life.

“My wife and I were just talking about this a couple of weeks ago,” he said. “My favorite thing about being a dad is that in each one of my kids, I can see traits of people I love who are not alive anymore. So, like in my son, I see my grandfather Bynum’s sense of humor, his love of life. In my daughter, I see my grandmother LaFortune’s sense of style and love of art. It’s so cool to see these people that neither one of them got to meet, yet you see them through your kids. I don’t know how it happens, it’s just really a miracle, but to see those traits in them is wonderful.”

Mayor Bynum’s love of family and the city carries with it the weight of responsibility.

“That’s the motivation for me for doing all this,” he said. “I think about the city my great-great grandfather came to in the 1880s. It was a couple of wood buildings and mud streets, and everything that has been built here that my kids enjoy today is here because somebody was trying to leave the city better than they found it. Just as people built it up for me, I want to build it up for them. We’re just another generation of Tulsans trying to build a better city for the next generation. That’s why it’s a great city, because multiple generations have done that.”