Living with Twins with Special Needs 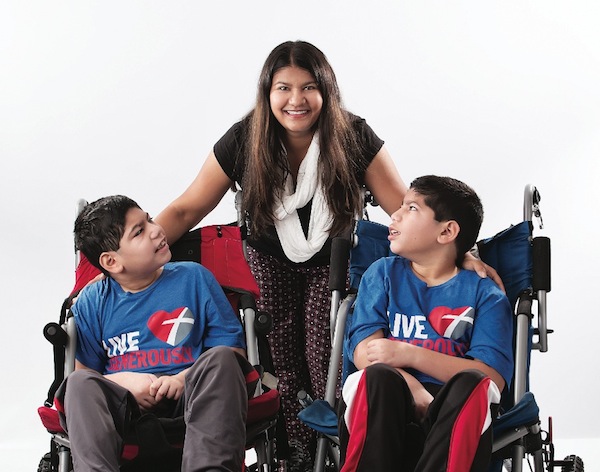 When I requested an interview with Jane Jacobs, she asked if we could meet at a coffee shop in Broken Arrow because she couldn’t be more than 20 minutes from her 14-year-old twin sons in case one of them had a seizure. The boys, Donovan and Sebastian, who are in a special education class at Broken Arrow Public School’s Freshman Academy, might have as many as 30 seizures a day. Seizures that last longer than three minutes require medication and the child must go home.

Donovan and Sebastian have Migrational Brain Disorder, a birth defect of the developing brain and nervous system. Simply put, the cerebellum didn’t develop normally during the first trimester, so the twins are left with a host of difficulties, including the inability to speak, eat, balance themselves when walking or bathe themselves. As a result, Donovan and Sebastian use wheelchairs and wear helmets for their own safety, and they must also wear diapers. The seven medications they take each day minimize, but don’t eliminate, the seizures.

That’s the reality for the Jacob family, but it doesn’t cloud Jane’s cheerful nature. She said that people always ask about her almost constant smile. “I’ve always smiled all my life,” she says. But, she admitted, sometimes the warm smile belies her inner feelings of isolation. “Inside you’re lonely,” she said. “I can’t relate to other parents, especially when they complain about normal life, like being up at night with a sick child.”

Despite the twins’ constant need for care, they bring happiness to the Jacobs. “If you’re in a bad mood,” Jane said, “you’ll be happy hanging out with them. They have more struggles, but they love life and they love people talking to them.”

Jane says that Donovan and Sebastian have taught her two younger children, Maya, age 10, and Nigel, age 7, to be kinder, more mature, people. Maya enjoys helping with the twins’ care, including doing tube feedings, changing diapers and bathing them.

“Maya takes on the role of the older sibling,” Jane said. “They (Maya and Nigel) can tell you all about seizures. They do tube feedings. Their love for their brothers amazes me.”

Maya is also the twins’ biggest friendship ambassador. “She got all the neighborhood children to accept them,” Jane said. “She told them they could sit [on the twins’] laps and she would roll them around.”

Children take their cues from adults, so parents should be aware of their own behavior. Comments such as “Oh, I’m so sorry,” from a well-meaning person are actually hurtful. “My children are perfect,” Jane said. It’s also hurtful when adults speak to Maya and Nigel, but ignore Donovan and Sebastian. Even though they are non-verbal, the boys love being smiled at and talked to. And Jane doesn’t mind being asked questions about her children.

“I encourage parents to let their kids interact with the boys,” Jane said. “Sometimes they’re afraid of them, but you can help by letting your kids be around children with disabilities. Exposure is good.”

Having siblings with disabilities has made Maya and Nigel much more aware and protective of others who may be bullied or ignored. “My kids are attracted to underdogs at school or kids who are left out,” Jane said. “They befriend them.”

The downside of having children who require constant care is that family life revolves around it. A bus picks up Donovan and Sebastian for school where they receive two of the three tube feedings they require each day. They go to aftercare until five when Jane picks them up. Because her husband is often traveling for work, much of the caregiving is left to Jane. By the time she’s finished getting Donovan and Sebastian situated and ready for bed, it’s 7:30 or 8 in the evening and she has had little time to spend with Nigel or Maya to talk or help with homework.

“Sometimes I feel guilty,” Jane said. “Nigel and Maya want their time with mom. I also can’t take the younger kids to activities or just hop in the car and go somewhere. It takes 20 minutes each just to load the twins in the car. Sometimes we feel we’re trapped at home.”

To provide a feeling of normalcy for their younger children, Jane and her husband travel in the summer without the twins. Sebastian and Donovan stay with a trusted caregiver while the rest of the family spends time together and gets a much-needed break. “It feels strange to just hop in and out of the car,” Jane said.

While the family was in Europe visiting family over the summer, Jane noticed an advocacy movement for getting changing tables for people with disabilities like her twins into public restrooms. They’re much like infant changing tables, only much lower to the ground and sturdier. As it is, caregivers are left with using the floor of restrooms or struggling to change a child or an adult in the car. “I’d like to advocate for that [special needs changing tables] here,” she said. “It affects 10 percent of the population, and it’s a reason that we rarely go out in public. And it wouldn’t be very costly.”

Another cause that Jane supports is having medical marijuana available to patients in Oklahoma. She was disappointed that the measure won’t appear on the November ballot. Cannabis oil could help replace some of the boys’ medications. “The side effects of the medications are horrible, and they have to have constant lab work because of that,” Jane said. “I’ve been reading and researching cannabis oil and it has tremendous benefits without all the side effects.”

Jane said that she and her husband worry about what will happen to Sebastian and Donovan when they’re gone and, like most parents, they worry even more about the twins passing away before them. “I’ve even talked to Maya about it, and Maya said, ‘don’t worry, they can live with me and my husband.’” Jane smiles, tears filling her eyes. “Maya even said she wants to have two children, one of them with special needs.”