Known for her great attitude and sportsmanship, 17-year-old Jordan Jonckowski, who attends Oklahoma Virtual Charter Academy, spends much of her time on the ice. A local figure skater, Jordan recently won the Tulsa Figure Skating Club’s (Tulsa FSC) highest honor, an award presented in honor of former Tulsa FSC President Manny Grabel. Tulsa FSC is governed by the USFSA, and provides a path to the Olympics. The Club hosts social and recreational skating activities as well as provides skaters with an opportunity to reach the National, World and Olympic events. Jordan is preparing to test before the panel of US Figure Skating judges.

TK: When did you start skating?

Jordan: I was 4 years old when I started skating.

TK: How did you get into figure skating?

Jordan: I spent a lot of time at the rink because my older sister was also a skater. One afternoon my mom decided to put me on the ice to keep me busy, and I’ve been skating ever since.

TK: How did it feel to perform in front of the US Figure Skating judges?

Jordan: It is always nerve wracking performing in front of the judges, but you have to trust your training and skate like it were any other practice.

TK: Where have you preformed?

Jordan: I have performed all over the country, but mostly places like Oklahoma City, Dallas and Colorado.

TK: What awards have you won?

Jordan: My coach Jane is a huge inspiration to me. She continues to love and support me both on and off the ice.

TK: What advice do you have for future figure skaters?

Jordan: Skating is so difficult, but you just have to keep trying. When you fall down, you get up. I think this is also a great lesson for life.

TK: Where do you practice figure skating in Tulsa?

TK: What are your hobbies?

Jordan: I love to craft, specifically knitting, cross-stitch and scrapbooking.

TK: What are your plans and goals for the future?

Jordan: In the coming months, I would like to gain consistency on some of my jumps and build my endurance for my program.

Jordan: I love to do things outside, like hiking, rafting, or zip-lining. 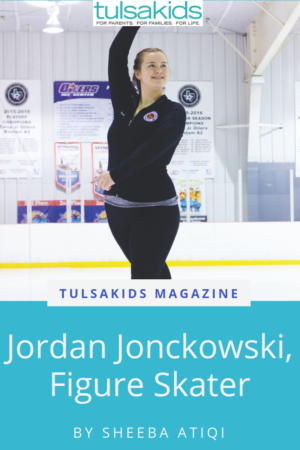