As the crowd cheers for her and the stage lights illuminate her dreams, 16-year-old Jesamine Katzman knows she was born to perform. The Broken Arrow High School sophomore has been making waves through the theatre scene locally, but now can be seen in the Sticks and Stones Virtual Concert and Benefit Show for Lady Gaga’s Born This Way Foundation. 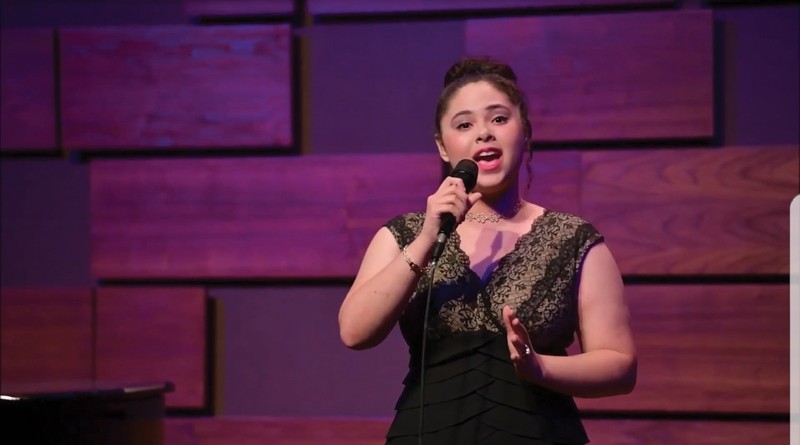 TulsaKids: At what age and how did you start in the theatre scene?

Jesamine: My parents tell me that when I was 4, maybe a little older, I was pulled onstage during a Poison concert by the lead singer, Bret Michaels. I remember the lights, the crowd and not being scared at all. They say that I told them after that, that I wanted to do that, be on stage.

I was 5 or 6 when I was cast in my first show with Tulsa Project Theatre. It was Seussical the Musical, and I was in the children’s ensemble. At the same time, I was taking a Broadway Baby Musical Theater class at Theatre Arts in Broken Arrow. I have been in about 30+ shows in and around the Tulsa area over the past 10 years.

TulsaKids: How were you cast in the Sticks and Stones virtual concert and benefit show for Lady Gaga’s Born This Way Foundation?

Jesamine: My mom saw a casting notice online in Broadwayworld.com and asked me if I wanted to submit an audition video. It looked like an amazing opportunity. It’s for a great cause to raise money for Lady Gaga’s Born This Way Foundation whose mission is to prevent teen bullying and promote youth mental health. There are also some well-known Broadway performers headlining this show It was a long shot, but I thought why not? It couldn’t hurt.

TulsaKids: How did it feel when you found out you were cast?

Jesamine: I was shocked at first. I wasn’t expecting to get that congratulations email. Over 1000 audition videos were submitted and only 95 were cast. I felt — and feel — very lucky, thankful and so excited to be able to work with an incredible cast from all over the world and well-known performers. Rehearsals started earlier this week and it was unbelievable to work with composer, conductor, orchestrator, record producer, Grammy and two-time Emmy Award-winner John McDaniel.

TulsaKids: What did you learn from this experience?

Jesamine: We are still in rehearsals and the show will not air until October. Being cast in this show has only shown to me, even more, how important it is to never give up no matter how many times I have been told “no.” This is so important to do for everything in our lives, not just working towards a career in entertainment. I have had many no’s along the way, and there are opportunities I would not have had, most recently, this one, if I had given up.

TulsaKids: What advice do you have for others who are interested in theatre?

Jesamine: Find as many opportunities as you can. I am in drama class at school. You can be in your school plays and musicals. There are local theatre groups that have auditions for shows and also have education programs to introduce and train youth in theatre in the summer and during the school year.

I just want everyone to know how important it is to keep working towards what they want to achieve. It might seem hopeless at times, but keep at it. You never know where it will bring you!

Jesamine: I have been onstage at the Tulsa PAC with American Theatre Company and Theatre Tulsa. I have performed with Tulsa Project Theatre, Broken Arrow Community Playhouse, Sand Springs Community Theatre and Sapulpa Community Theatre, as well as with Clark Youth Theatre and Encore! Tulsa. I also have been a part of the cast in my high school’s musical since ninth grade.

Prior to the pandemic, I could be seen at Tulsa Spotlight Theatre as Mary Morgan in their Drunkard & the Olio show that happens every Sat. evening.

I also have had the opportunity to work with Lyric Theatre of Oklahoma in OKC.

Last summer, I was able to attend a by audition/invitation only Sing Center Stage Masterclass Intensive in St. Louis, training with Broadway vocal coach Celeste Simone.

Next month, virtually, you can see me as part of the featured ensemble for STICKS AND STONES Musical Concert and Benefit show for Lady Gaga’s Born This Way Foundation. I also have the amazing opportunity to perform as part of Sing Center Stage, during The Cabaret Project of St. Louis’s Gateway to Cabaret Virtual Gala and Benefit next month.

TulsaKids: What other hobbies do you have?

Jesamine: I love to cosplay. During the pandemic, I really started learning how to create costumes. I am also a singer and dancer. I love hip-hop, tap, Broadway jazz and lyrical. And I play piano/keyboard. Spending time with my friends and family is also important to me. I also volunteer at the Oklahoma Aquarium.

TulsaKids: What do you want to be when you grow up?

Jesamine: I am really working hard to have a professional career in the performing arts, especially being a Broadway performer. I plan on going to college for a degree in Musical Theatre. I have been looking at so many different schools and programs all across the country. Fingers crossed, I am accepted at one of my top schools in NYC.

Jesamine: My mom inspires me to never give up and keep striving to obtain my goals no matter how many obstacles are in front me. She’s one of my biggest fans. My dad motivates me to be the best version of me. I have always had their love and support. Family, friends, my drama teacher, my voice coach — I am lucky to have each and every one of them in my life.

On a professional level, Broadway performer Jeremy Jordan also inspires me. Recently, I saw an interview with him about his career and he said, early on, he had really bad auditions. Today, he is a phenomenal performer with beautiful vocals. He is proof that hard work, dedication and determination pays off.

TulsaKids: What is a fun fact about you?

Jesamine: I was just inducted into National Honor Society. I am taking ASL American Sign Language at school so that I can use it in my career as a performer. I also started working as a haunt actor two years ago and love it. You can see me at Insanity Farms in Tulsa this season as one of their principal actors.

To learn more about Jesamine and keep up on the latest news: Instagram: @jesaminekatzman_official. 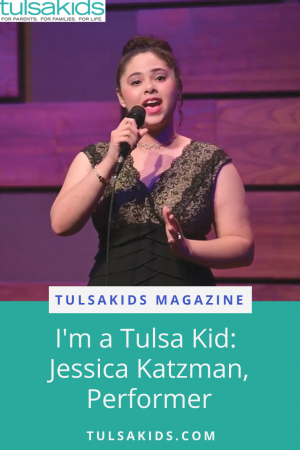