Hey, you! Get your baby on his/her tummy!

My son slept on his tummy when he was a baby. GASP! I know, I know. It’s the only way he would sleep longer than 20 minutes and after a couple of weeks of only letting him nap on his tummy I caved. 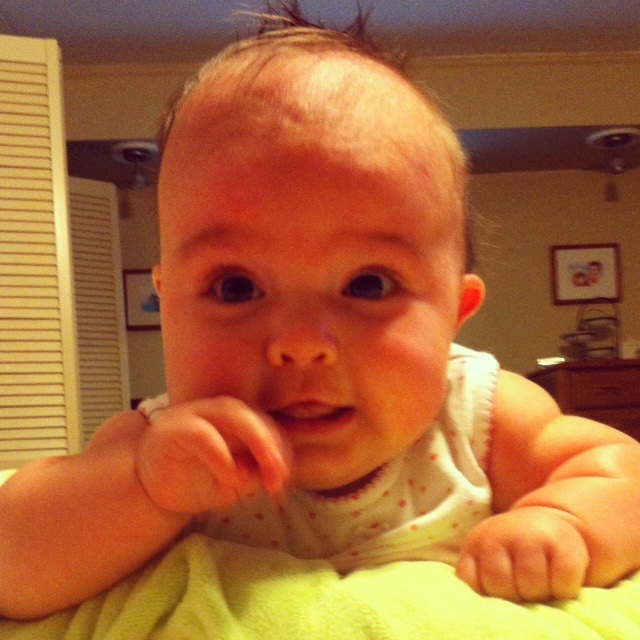 Because of this, any sort of head shape issues was not on my radar.

Fast forward to the present to my daughter who hates…H-A-T-E-S…being on her tummy.

When we brought her home from the hospital her biliruben number got pretty high, so we had to do the “tanning bed” for 7 days in our home. You’re supposed to keep them under the lights as much as possible. So, besides nursing, she pretty much stayed there. At the time, I was so concerned with the jaundice situation, I didn’t pay any attention to the fact that she was highly favoring looking to her right. It was after the jaundice situation was over when I noticed that the right side of her head was substantially flatter than her left. At her check-up, her doctor also noticed that her neck muscles were tight not allowing her to move it to the left unassisted, so she referred us to a physical therapist.

At physical therapy we learned that our daughter had torticollis and that the torticollis was causing plagiocephaly, or more commonly known as “flat head.” The torticollis is basically a tightening of the muscles in her neck and the plagiocephaly is, well, when your baby’s head is flatter in one area.

Her physical therapist did some stretching and exercises for the torticollis, and taught me how to do them at home. The cure for the plagiocephaly was to basically keep her off of that spot. She stressed that it was important for us to be vigilant about them in order for them to work and that the worst case scenario would be for her to be put into a helmet to correct it.

I have a friend whose son had to wear the helmet for 6 months and she informed me that most insurance companies don’t cover the helmet therapy because it is considered to be cosmetic. Wha? Oh those greedy no-good….

Regardless, we didn’t want to drop a few grand on that, so I took the therapy very seriously.

If she was awake she was on her tummy.

Like I mentioned earlier, she hates being on her tummy, so I had to get creative with it. When she was 2-3 months, the best way was for me to lay her on my chest. This was a more cuddly way in the beginning. I also use the Boppy and placed a mirror in front of her. As she gets stronger, we do a lot of “airplanes.” And I even get a workout by resting her on my bent legs and moving my legs up and down.

For the torticollis, I had to do re-positioning. Which basically means that you do whatever you can to encourage her to look the other way. I changed the way I put her on the changing table, in her crib, etc. So, there was nothing but a boring wall on her right side, but alot of fun things to see on her left. Also, I stretched her neck at EVERY diaper change. There were two stretches I did for about 10 seconds each:

She wasn’t a fan, BUT I’m happy to report that we got the “ok” from her physical therapist and pediatrician and will not be having to shell out thousands of dollars for the helmet therapy. Also, most people can’t tell the difference in her head shape. Of course, I can, but I’m her mom. I’ll probably be checking out her head shape for many years to come.

I’m still vigilant about tummy time and there are more exercises that our physical therapist gave us to help strengthen her neck and tummy muscles. The quicker she’s sitting up, the less time she’ll spend on her head. I’ll let you know what those are and how they’re going soon.