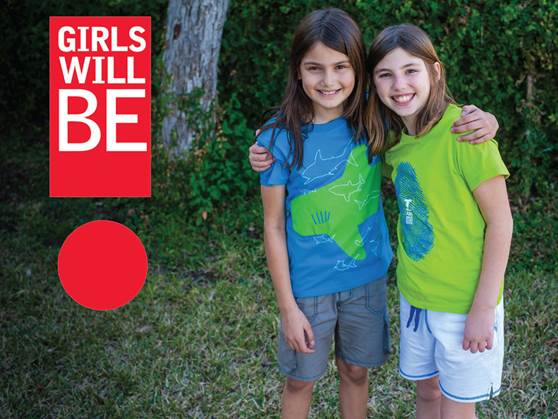 Now y’all know I don’t endorse products here; however, I’ve gotten some things in my office that I’ve talked about once or twice. Remember the wrinkle cream? Or as marketers prefer to call it “anti-aging.” I use so many products described as “anti-aging” that I really should be an infant by now ala Benjamin Button. But I digress.

I received an email message from something called GIRLS WILL BE. Naturally, I’m a female and I have two female children, so rather than hit DELETE as I usually do with unrecognizable emails, I opened it up.

So, here’s the thing. It’s a Kickstarter venture started by a couple of moms who couldn’t find just regular girls’ clothing. You know, the kind without ruffles, bows, sparkles and that pink stuff, not to mention “skinny” and super short. The pictures of the girls, which I am showing you here, look like my friends and me when we were that age. It took me back to the days when we were catching tadpoles, climbing trees, daring each other to jump off of high places and throwing dirt clods at each other. And they look like my girls when they were that age.

So, in the spirit of non-girly girls everywhere (and I’m not saying there’s anything wrong with girly-girls), I salute these moms who are making clothes that are high on play-ability and low on discomfort.

If you’re interested in taking a look at the project and the clothing, go to their website.

Ok, girls. Now, go out and get dirty!