I missed blogging two weeks ago because I had jury duty. And then again last week because I felt like I was still recovering, even though my service only lasted three days. I could’ve probably gone to bed by 8 p.m. ever since last Monday and been perfectly fine. 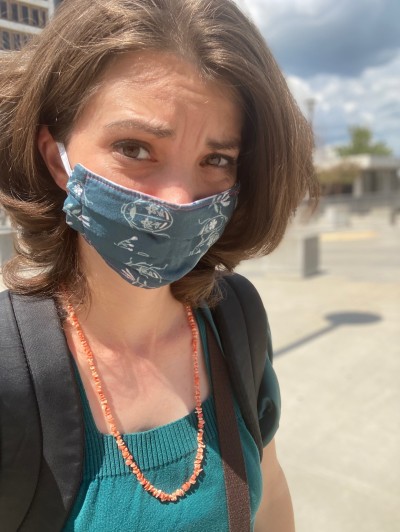 About sums everything up…

On a positive note, our morning routine has been going smoother. I think waking up early enough to make Joss breakfast before leaving for school has really helped. We’ve only had one drop-off meltdown, and that occurred in the first week of school. So – fingers crossed – we’ll continue in that vein.

Since I’ve been too tired to think straight, I figured I’d just make a simple list of some things I’m looking forward to this fall! 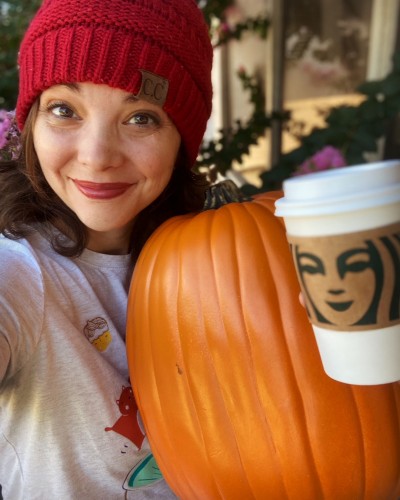 Definitely bought a #PSL the day after Starbucks released them…even though it was still August….

Thanks to Natalie Mikles, TulsaKids has a lot of excellent fall recipes on our website! Here are a few (and look for even more in our October magazine!):

I haven’t spent too much time thinking about fall baking yet, but this article from Taste of Home promises “75 Fall Baking Recipes Cozier Than a Chunky Sweater.” Standouts on the list include Cinnamon Crackle Cookies (with lots of citrus zest!) and Mexican Chocolate Biscotti.

(Okay, after writing that on Friday afternoon, I went home and made Cinnamon Crackle Cookies over the weekend. Can confirm that they’re amazing!) 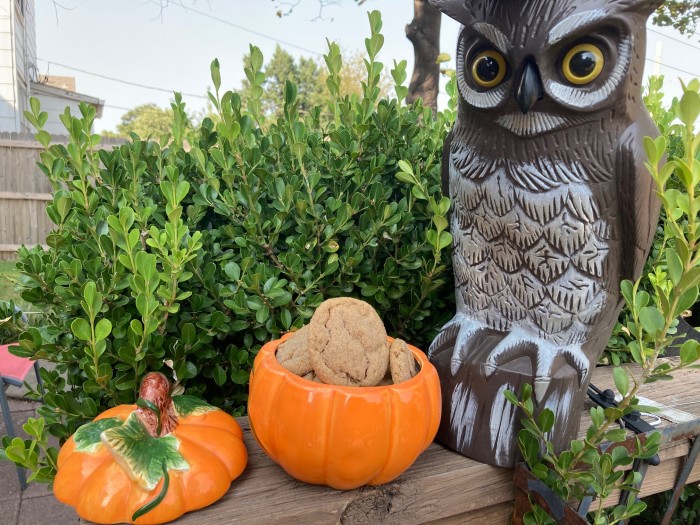 Speaking of fall baking, the next season of Great British Baking Show is airing September 21 in Britain! In the U.S., it looks like we’ll have to wait till September 24 to watch the first episode, but I can handle that. (I follow @britishbakeoff on Instagram, and they’re always posting spoilers about the episode before it airs in the U.S. Every year, their U.S. followers get so frustrated! But…what do you expect? I don’t mind spoilers, anyway.)

Another British TV show I’m excited about is Taskmaster series 12, which airs September 23. Sadly, I don’t know of a legitimate way to watch it as it airs…so fingers crossed that that will happen.

I got in a fall crafting mood as soon as September hit, starting with these polymer clay pumpkins. Polymer Clay is such a great material to keep around your home. And for these, you only need a handful of colors. Just make an orange ball, give it a twisty green stem and vine, and then a little face! Bake according to your clay’s directions. Give them as gifts to spread some autumnal cheer! 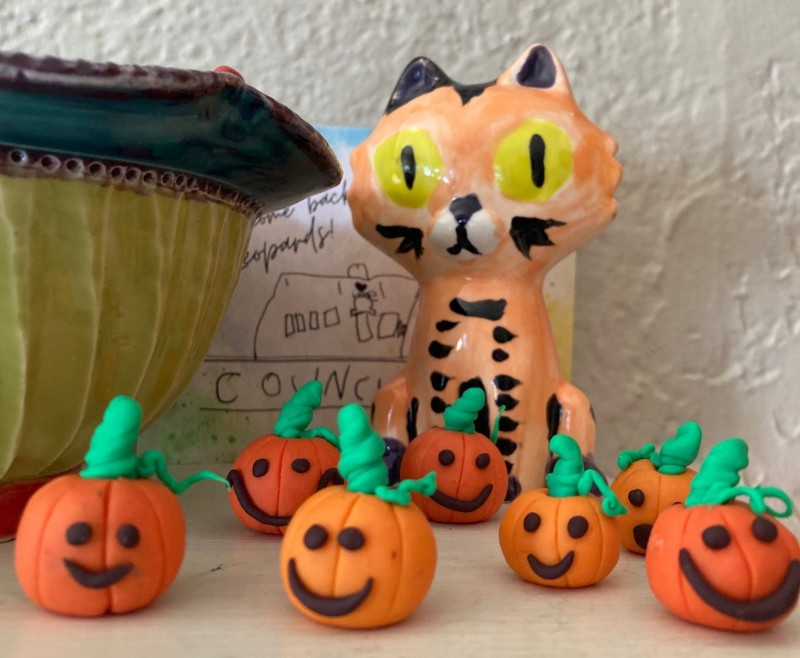 Another craft supply I like to have on-hand is watercolor paper and paints. I’m a terrible painter, but it’s a very relaxing activity. And it’s something you can do while watching TV, so you feel creative but still get to enjoy a favorite show or movie. We watched the 2019 The Addams Family cartoon over the weekend, and those characters are so distinctive, it was really fun to try painting them afterwards. 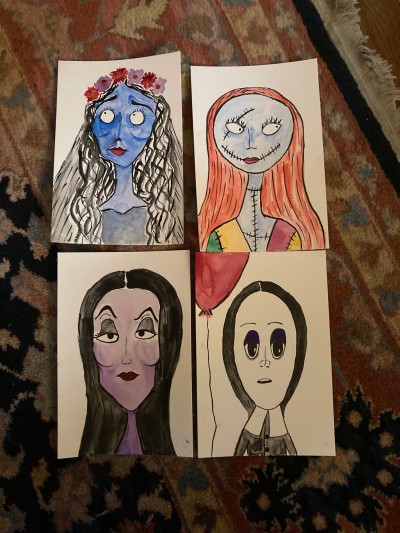 One final craft: Mini pumpkin treat bags! Another simple craft that could be given as a gift. These are very small, but the first one I made still held at least 5 Hershey’s kisses. Simply use orange felt to cut out pumpkin shapes. Then cut eye and mouth shapes from yellow or black felt, and a strip of green felt for a handle/stem. Sew the facial features and details first, then stitch around the outside of your pumpkin. Make sure to sew in the handle and to leave space at the top for treats! 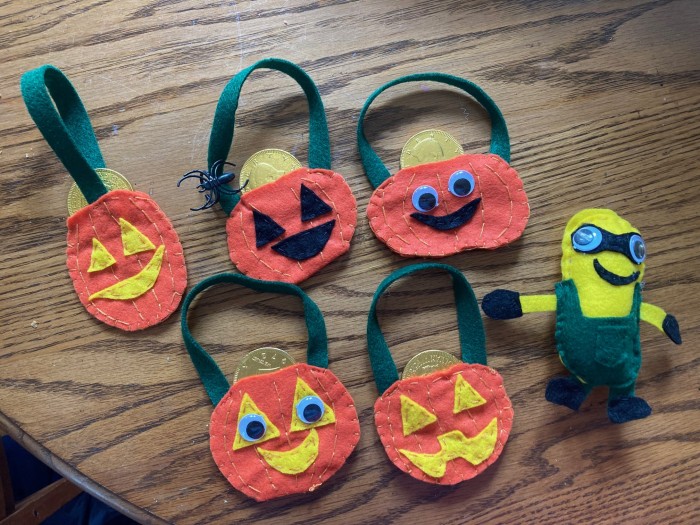 Joss saw the felt and requested a couple Minion dolls, so there’s another option…

I hope we can do a pumpkin patch this year! Last year, Covid challenged our pumpkin patch plans. I mean, we tried to go to two different places, but turned around once we got there due to the lack of masking and social distancing. So I’m trying not to get my hopes up. But if you do plan to go to a patch, here’s TulsaKids’ updated list of pumpkin patches!

TulsaKids is excited to be a part of Tulsa Botanic Garden’s 9th Annual Day in the Garden (D.I.G.) fundraiser for their Children’s Discovery Garden. Last year’s event was so much fun, with pumpkins, scarecrows, music, magic and more! This year, it’s taking place on September 26. Here are the deets:

“Kick off your fall family fun at our annual DIG among pumpkins, scarecrows, and our hay maze decorating the Garden for the season.

Enjoy the sounds of Gregory Fallis & The Green Horns brass band and sing-a-long fun with Hot Toast Music Co. Explore the Garden and visit with costumed characters, take family snapshots at the photo booth, make giant bubbles at activity stations, decorate a pumpkin, go on a scavenger hunt and explore the Garden.

All activities are planned outside or open-air and we are closely monitoring safety recommendations from health experts.  Any safety updates will be added here and on our Facebook event.

Lunch (served from 11:30 am – 2 p.m.) with taco bar and vegetarian options and drinks including local beers, wines, mimosas and a signature cocktail is included in ticket price. “

We’ll have a table at the event, although I’m not 100% certain I’ll be in town that weekend. But even if I’m not, there’s still plenty of seasonal fun to be had at Autumn in the Garden, which lasts through October 31 and includes all the scarecrows and pumpkins.

I’ve been playing with Halloween looks for the past couple of weeks. Last year, I published a blog post about easy, last-minute Halloween face paint ideas. Sadly, my skills haven’t progressed much since then. As I said, I’m not much of a painter. Shading and contouring skills continue to prove elusive. But one of my favorite things is throwing together a look in about 20 minutes or less, with whatever makeup look I haven’t tried yet paired with what’s on-hand in my closet. 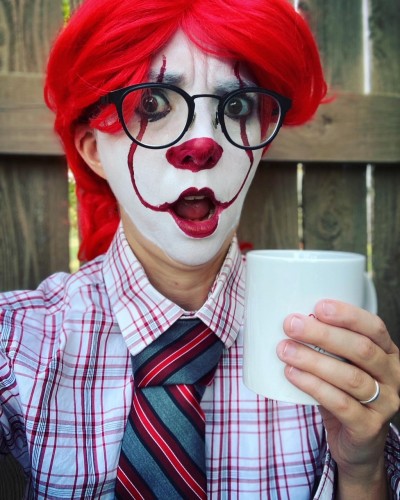 This won’t make sense if you’re unfamiliar with The I.T. Crowd…but if you are, hopefully it does?! 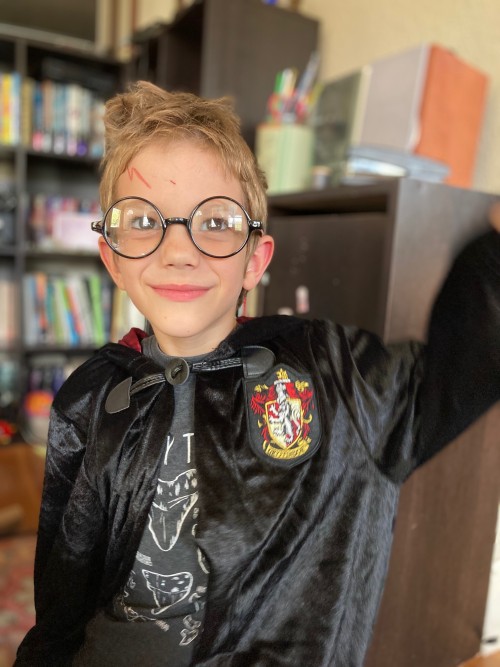 Joss requested a Harry Potter costume this year. Cuter than I could have imagined!

I mentioned above that we watched The Addams Family movie from 2019. This was a first for both Joss and I, and we really enjoyed it. We’ll probably watch it again before the end of October. The only downside is that Morticia’s dress is full of spiders. You can’t usually see them, but at one point they come pouring out of the bottom of the dress to build a bridge a cross the bottomless pit. All fine and good, but at bedtime, that image stuck with Joss and he got a little freaked out, imagining spiders everywhere. So…we’ll see about a second viewing…

The Addams Family 2 is coming to theaters October 1, and will be available to rent to stream as well. It looks like they’re going on a road trip!

Another October 1 release is “Hotel Transylvania 4,” which will only be available in theaters. I think I’d added it to our Summer Bucket List, but either I had misinformation on the release date, or they pushed it back. But it is being released October.

Finally, Disney+ will also be gaining a new Muppets special, “Muppets Haunted Mansion,” on October 8. We have several Muppets films to catch up on (the Muppets Christmas Carol was a big hit last year!), but this should be fun.

What “scary” films are on your October watch list? New or classic, all are welcome – share in the comments! And let me know which fall activities you’re looking forward to! 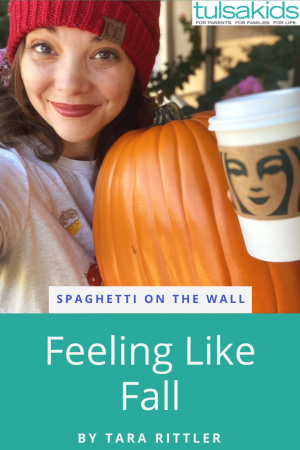