Discovery Lab: A Gift We’ve All Been Given 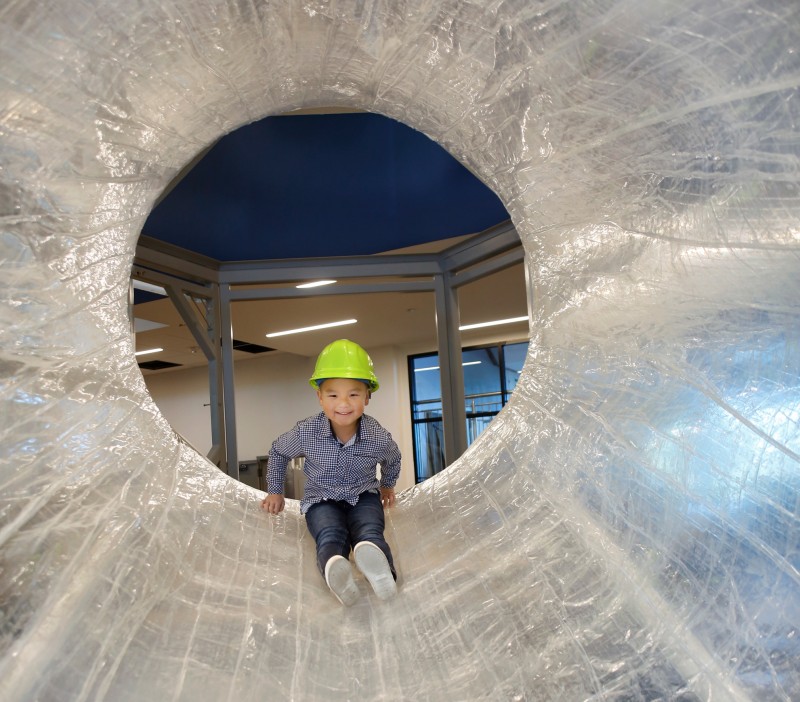 In the summer of 2007, Leah Saidy Storm and Stephanie Stump happened to be at the National Association of Children’s Museums conference. Both from Tulsa, they were on parallel paths to bring a quality children’s museum to Tulsa but hadn’t met each other yet. The pre-conference-day topic interested both of them: Starting a Children’s Museum.

That seed of an idea has now seen final fruition as the new Discovery Lab opens this month at the south end of Gathering Place on Riverside Drive. The 57,000-square-foot museum houses over 20,000 square feet of exhibits and an almost 7,000-square-foot education center. Discovery Lab also has an outdoor amphitheater and a STEAM Center to provide hands-on experiences for Tulsa Public School students in pre-K through sixth grade.

In addition, the museum will be available for birthday parties and private rentals, including a rooftop terrace space called Thirty-One Twenty-Three Discovery Lab. The rooftop space offers incredible views of the river and the Tulsa skyline. 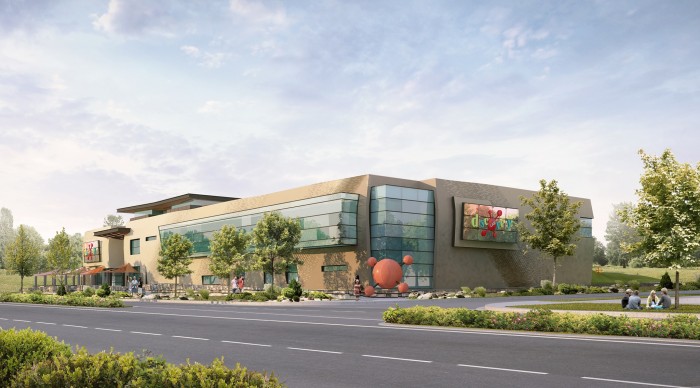 A Museum Without Walls

It’s hard to imagine that the large building gracing Riverside Drive was once a “museum without walls.”

“We were a museum without walls for seven years,” Stump said. “It was never a matter of ‘if’ but ‘when’. We just wouldn’t quit. We had so much momentum over the years. People saying, ‘I want to volunteer’.”

“We were learning as we were going,” Saidy Storm said. “It was an amazing, creative time.”

Volunteers took the museum’s traveling exhibits to schools, libraries and the Historical Society, not just to provide hands-on experiences for children, but to raise awareness about the importance of play.

“Play is disappearing from even early childhood classrooms,” Saidy Storm said. “Recess is being reduced throughout the day. Tulsa is so family focused, yet we didn’t have a children’s museum.”

Stump and Saidy Storm said that from the beginning, everyone wanted the museum to be successful – a journey that took years of ongoing research. “It’s not just a play place,” Saidy Storm said. “We wanted it to be founded in the best educational practices from early childhood and up.”

They sought input from community leaders about Tulsa’s strengths and weaknesses. They talked to people at the YMCA and the Tulsa Library system, not wanting to duplicate services.

As plans progressed, the board hired Ray Vandiver from a museum in Oregon as executive director, and he continues in that role.

A year later, after searching for an ideal spot, the Owen Park facility opened. The board saw it as a hub that would draw visitors from all parts of the city, fitting their vision of being accessible to all Tulsans. The museum, through supporters and generous donations, provided experiences for children in Title 1 schools, offering fieldtrips and hands-on classroom learning experiences. That mission will continue at the new location. 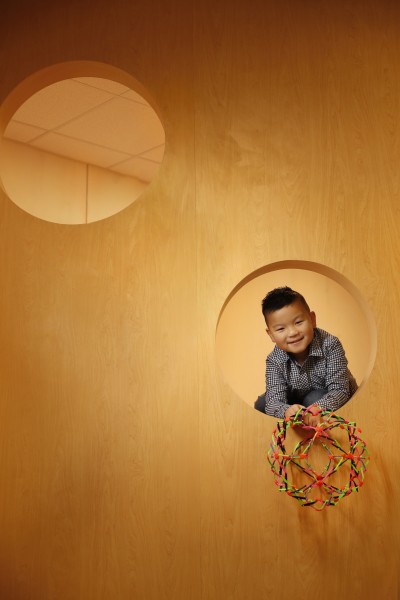 Owen Park also allowed the museum to grow slowly. “A children’s museum should be what the community wants,” Saidy Storm said. “We got our feet wet at Owen Park.”

Staying focused on the mission to provide a safe, educational environment for children to explore, the board hired a national consultant months before opening the Owen Park facility.

“That’s where the tape tunnel came from,” Stump said. “A funder said, ‘Nobody will want to play in those tape tunnels.’” Meant to be temporary, the tape tunnel was so popular that it remained at Owen Park and will be part of the new location as well.

As the Owen Park recreation center was transformed, board members and community volunteers helped with painting, cleaning and refurbishing. Vandiver turned out to be more than an experienced director; he was a hands-on worker, pitching in where needed.

“When he was a kid, Ray wanted to be an astronaut or a plumber,” Stump laughed. “He has a Ph.D. in physics and has a knack for construction. When the splash pad toilets wouldn’t flush, Ray and I would put a bucket of water in them. When we rented exhibits, they came in large crates. We had to store them in my garage, which taught us that we would need storage in the new location.”

Anne Mannell, a founding board member who is currently Discovery Lab’s director of organizational development, said that it quickly became clear that Tulsans needed a larger museum than the Owen Park building, which had twice the number of children and families visit than had been projected. “Owen Park would not be large enough to meet the demand for that type of programming,” she said. “It was always meant to be a temporary space.”

“It was a bit of a ‘test kitchen’ where we could prototype and test ideas with the community for an eventual permanent site,” Vandiver said. “The experiment was definitely a success as evidenced by the incredible support our capital campaign received.”

The George Kaiser Family Foundation gave a gift of land within Gathering Place to Discovery Lab, providing a permanent home for the new museum.

“We are planning for a soft opening towards mid-December and are projecting 300,000 visitors in the first year,” Mannell said.

Those visitors can expect to see seven galleries and “three high facilitation areas ranging from a water area to an interactive projected reality experience. There is something along the entire continuum of technology,” Mannell said.

In the early days, Stump said she had visions of her 3-year-old daughter playing in the museum. That child is now 16. “It took a lot longer than we thought,” she said. “It’s one of the things I’m most proud of outside of my family. I want to thank everyone who visited, completed a survey, volunteered…everybody built it.”

“It’s been a family and community affair,” Saidy Storm added. “It’s a dream come true. What a beautiful way to impact our community. It’s a gift we’ve all been given.” 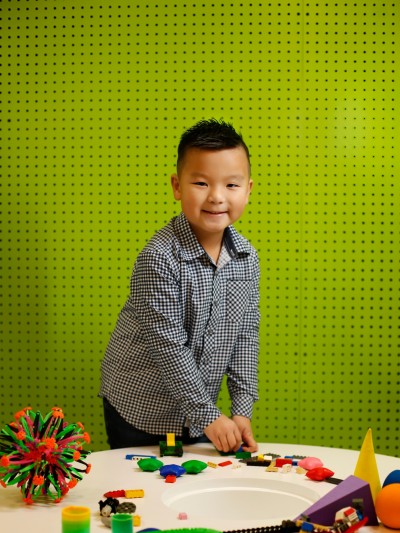 A Word About the Building

A children’s museum must be planned with children in mind. We asked Sarah Gould, AIA, president and CEO, and Jim Boulware, AIA, principal with KKT Architecture\Interiors\Engineering to answer a few questions about what went in to designing the new Discovery Lab building.

Q: In planning a children’s museum, what were the main considerations regarding the look and feel of the building as well as the practical aspects?

A: The building design was driven by function and context. To understand the function, we looked at the way that kids and adults would move through the building and the experiences they would have along the way. Hundreds of kids will be flowing through the building at any given time, so we spent a lot of time studying pathways, site lines and flow.

The heart and soul of the Discovery Lab are the exhibits, and the heart of the building is a container for that experience. So, starting there, we designed a large, open, 2-story clear-span exhibit hall four times larger than the Owen Park facility. Because the exhibits are not meant to be permanent, we had to ensure that the building infrastructure will allow exhibits to be easily modified, added to, removed and replaced. An onsite fabrication shop will provide them the space and tools to experiment and create new experiences for the customers.

Flexibility was important for the classroom spaces as well. We needed to ensure that the classrooms provided appropriate acoustics and functionality whether serving a group of 10, or an entire grade level filling all five classrooms.

KKT loves designing spaces for kids! While we pay special attention to things like durability, cleanability, tactile experiences and acoustic control, the best part is that kids don’t come in with any preconceived expectations, so we can really let our imagination run wild. We hope that by providing new experiences and surroundings, we can help broaden kids’ perspective of their surroundings, and see that anything is possible.

Q: What do you think will be the architectural elements that visitors will notice about the building?

A: Hopefully, they notice something new every time they visit! We hoped they would take a minute to explore and discover things about the building that might not be visible at a distance, might appear differently from a different perspective, or at a different time of day or year. In the beginning, we asked, “When do we want the museum experience to begin?” We were in this incredible park, so why not start when you enter the Gathering Place? There’s always something new and different to discover each time you visit Gathering Place.

Q: Since so many people will be using the Discovery Lab, what safety elements did you incorporate into designing the building?

A: Safety was on our mind throughout the entire design process. Not only did we want to meet or exceed all standards of safety, we also spent a lot of time studying how to accommodate the many different groups that would be using the space to create an environment that is accommodating to a wide range of group sizes, ages and physical capabilities.

Q: Those bricks! Tell us about the interesting and unusual brick configuration used on the outside of the building.

A: One of the design goals behind the Discovery Lab’s exhibits is to find new and unique uses for ordinary materials (like suspended tunnels made of packing tape!). So, when budget moved us away from the materials of the other buildings at Gathering Place, we explored ways to do something unique with brick and eventually landed on a solution that reduced cost and fit the image and concepts behind the Discovery Lab.

Conceptually, we envisioned a 4-dimensional expression to create an undulating façade design that would appear to change depending on your perspective and the constantly changing shadow patterns.

At this point, we are pretty obsessed with bricks…. Sarah actually gave Jim a box of toy miniature bricks for Christmas while in schematic design. She might have been initially joking, but Jim definitely enjoyed messing around with the bricks, and ultimately realized he could make a template out of cardboard, and stack the bricks against it, then raised the next course (row), and then the next and continued to stack and explore. That little brick model is how we explained the exterior concept to Discovery Lab….and it’s the same method the masons actually used to construct it (although not miniature)!

A: The tape tunnels are engineered! KKT’s Director of Structural Engineering, Jim Guerin, works with the Discovery Lab exhibits and fabrication team to design and engineer the packing tape pattern to create the tunnels. He is currently working with their team on the new tape tunnels for this location, and it actually takes an effort from a team of 8-10 people to create (and re-create) those tunnels multiple times throughout the year. 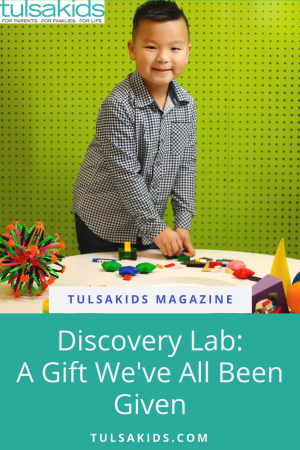