Maggie Hope-Hernandez, my daughter (#ProudDad), has joined the long, long roster of kids – and grownups – who have had roles in Spotlight Children’s Theatre productions since 1996. She’ll appear onstage as Pastor Malden and as Mrs. Jack Payson in the company’s 2018-19 season closer, Susan Pargman’s version of Pollyanna – the classic story of the relentlessly cheerful orphan who overcomes hardships and pulls an entire town out of cranky doldrums by means of her always-a-silver-lining “Glad Game.”

Now in its third decade, SCT – a 2018 “TulsaKids Family Favorites” winner – is a program of Spotlight Theatre, housed in the landmark once known as Riverside Studio designed by Bruce Goff in 1928 and added to the National Registry of Historic Places in 2001. Spotlight Theatre has presented its hilarious, family-friendly The Drunkard and The Olio nearly every Saturday night since 1953 – making it the longest-running play in America.

Signing the backstage walls is an old Spotlight tradition, explains SCT Managing Director Shirley Gilmore. “It’s always a thrill to write your name on those walls.”

For Maggie and the 16 other kids cast in Pollyanna, ranging in age from 7 to teenage, the big thrill is yet to come: opening night on May 3.

For my 9-year-old and several of her castmates, it’s a first-time chance to be in a real play – a full-blown production on an actual stage with a real theater curtain, lights, sets, makeup and costumes, even wigs. (It was a double-take moment when I first saw Maggie costumed as Pastor Malden in rehearsal. I didn’t recognize her at first glance.) 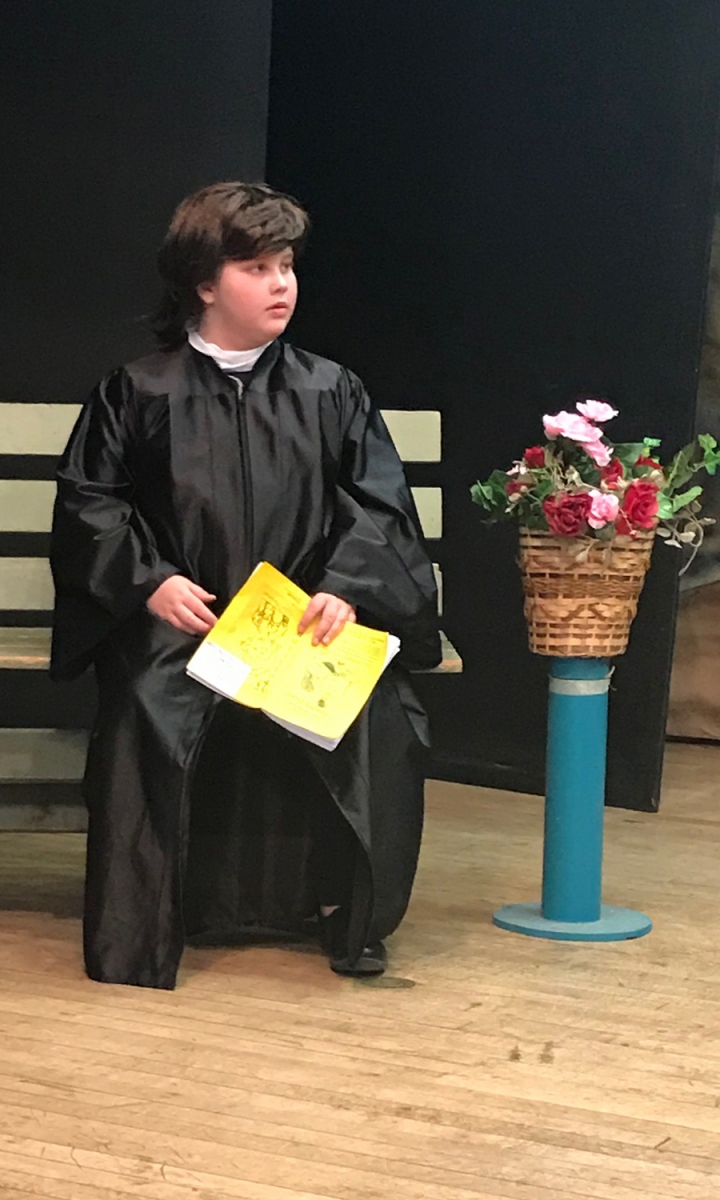 Maggie Hope-Hernandez, rehearsing as Pastor Malden in the SCT production of “Pollyanna”
opening May 3.

By opening night, the cast will be well prepared. Rehearsals – two hours each, three nights a week – started March 11. In the two “Tech Weeks” before opening night, rehearsals will last nearly three hours.

Grace Bennett, the 11-year-old veteran actor appearing as Pollyanna in almost every scene of the two-act play, has been rehearsing – and learning her hundreds of lines – since January.

It’s a big commitment for the kids and their parents. Is it worth it? You bet.

“It’s just so much fun,” says Erin Herring. She should know. She started acting on the Spotlight stage at age 9 as Erin Osborn, her maiden name – running the theater’s eponymous spotlight at 10 and appearing onstage in more productions than she can remember. Now a card-carrying adult, she’s directing Pollyanna, her first SCT directorial assignment, in this first-time SCT production of the play. “You make so many friends each time, and it’s fun to see those friends in the next show,” she says. 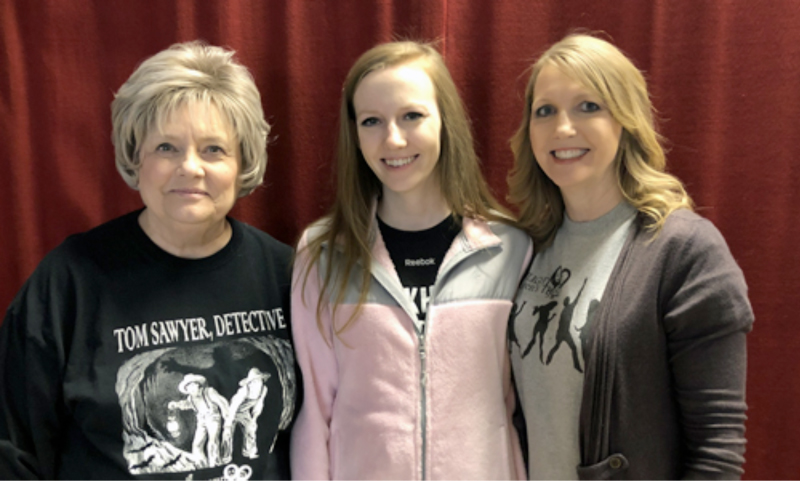 It’s also a super confidence builder. SCT asks a lot of its actors. Watching performances develop – from stumbling cold-reads to thespian mastery as opening night draws nearer – is simply amazing. I didn’t know my kid could do that… Chances are, your child didn’t know it either.

Not least of all, the experience builds camaraderie and a sense of community. Putting on a play is a team sport par excellence, where every actor – everyone involved – plays an indispensable part in the success of the whole production.

There’s no participation fee. SCT productions are funded by ticket sales and by the sale of production mementos: commemorative t-shirts, mugs, and the like. And anyone can audition for any SCT play: adults as well as kids. In fact, the typical SCT production features grownup actors alongside the kids in the cast.

“I feel sometimes like ‘Spotlight Children’s Theatre’ is a misnomer,” says Kris Osborn, Spotlight veteran, Pollyanna producer, and Erin Herring’s mother. “It’s really family theatre. This show is an all-youth cast. But in the past we’ve done mostly family theatre. It was so great to be on the stage with Erin and experience it with her — and see both her and my husband on stage.”

“It’s not sports and it’s not academics but it’s something that helped to shape Erin as a well- rounded person. It’s been such a blessing I want everyone that comes through these doors to have as great an experience as we’ve had,” Osborn said.

#ProudDad, I’ll give the last word to Maggie.

“When I go onto the stage, when I see all the sets and the props and costumes, and all those names on the walls backstage, what I see is love. If it weren’t for the love of all those people over so many years, this theatre wouldn’t be here. It was made by love.”

#ProudDad’s recommendation: Come see Pollyanna. Bring the kids. And see if you – and they – would like to be part of SCT’s next season.

Peter and the Wolf

All auditions are held at the theatre