5 Reasons Why Snow Blows (At least with Small Children) 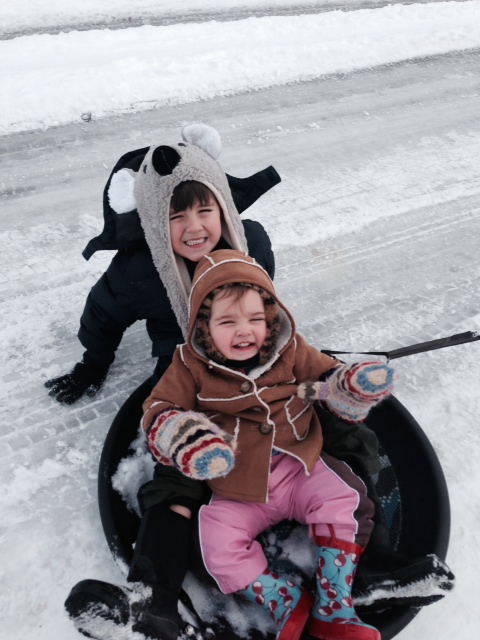 Look, I’m not going to complain this whole blog post. I’m actually looking back fondly on all of the extra time I was able to spend with my children since this whole snow mess happened. And by extra time, I mean every minute of every day. And by every minute of every day, I mean it because my oldest sleeps in our bed and my youngest has demanded I sleep in her crib and pat her back until she falls asleep lately. I was able to go solo to a matinee on Sunday, but spent the whole time worried about my children because, well, I’m a mom and we’re just twisted that way.

So, anyways, after the first initial excitement of the snow – after the cozy fire goes out – after that first five minutes in the snow wears off, here is the reality of why snow blows.

I don’t know about you guys, but my 3-year-old has some serious opinions about what he wears. To the point where this morning he put a white sock on his left foot and a dinosaur sock on his right foot. On purpose. Because “he didn’t want to have too many dinosaurs on his feet.” Okey-dokey.

Since we live in Oklahoma and you don’t ever know if you’ll ever need snow gear, we don’t really have any, so I just layered him up and put waterproof anything on top of it. Of course, I don’t go around buying snow boots for no reason, so both of my children were sporting their rain boots to play in the snow. Here’s the thing, a 1-year-old isn’t the best walker in general, so when she’s wearing her rain boots, she basically looks like a little frankenbaby walking around. It’s all just a jumble of awkward clothing.

I think this is an obvious one, but after you get them all dressed they have to pee – always.

I wonder how many minutes I spent trying to get their fingers in each individual glove finger?

So, they’re just so excited to get out there – open the door and rush outside only to slip and fall on the ice. If they recover from it unharmed, it’s just a good lesson. But if their slip didn’t end gracefully, you’re either headed to the e.r. or trying to coax them into getting back out there so that all your hard work (getting them dressed) isn’t in vain. Or, if you’re like me, you’re the one who falls.

Well, that’s the thing about snow. And the minute your little one gets a little snow in their boot or glove, they expect you to make it go away.

So they’ve had their fill of playing in the snow, and 10 minutes later they come back in the house bringing all of their snow inside with them. You can lay all the towels down that you want, but you will be stepping in cold puddles for the rest of the day. And, right when they’re all warmed back up and you’ve recovered from slipping on the ice, you hear “I want to go outside.”

Luckily, snow days are kind of like being in an airport or tailgating because you can day drink! I mean, you can’t drive anywhere anyways, so that Bailey’s and coffee really helps you recover from that slip you took earlier.

Now to be completely honest, we did have some pretty magical moments over the past couple of days – like sledding down the hill behind Harwelden mansion (see video below – excuse the shrilling, but seeing your baby barreling toward a tree is a bit unnverving) and drinking hot(ish) chocolate by the fire. Also, my neighborhood banded together and took turns hostessing play dates.

BUT, judging by my son’s spring into his classroom this morning, I’d say we were ALL ready to get back out there today.

So, in conclusion, snow days are like most things when raising children, alot of work for a little fun and completely worth it.