If your family makes New Year’s resolutions, consider committing your tribe to tackling chores together. Few items are as high on parents’ lists than to get the kids to help out around the house. But should parents require their kids to do chores and, if yes, what’s the best way to go about it?

The answer to the first part of the question is a resounding “Yes!” Experts agree that having the kids do chores not only enhances their self-esteem and sense of responsibility towards others, but it also strengthens internal family bonds.

Development Psychologist Dr. Richard Rende agrees: “It contributes to family cohesion when there’s a feeling of everybody trying to help each other and take care of each other.”

Research shows that one of the best predictors of how well kids do later in life is if they did family chores. In a study conducted over a span of 25 years, researchers found that kids who started doing chores at age 3 or 4 had more satisfying relationships with family and friends and were more successful in their careers two decades later than their non-chore-doing peers.

Julie Lythcott-Haims, former dean of undergraduate students at Stanford University, sums it up well: “By making kids do chores – taking out the garbage, doing their own laundry – they realize ‘I have to do the work of life in order to be part of life. It’s not just about me and what I need in this moment, but that I’m part of an ecosystem. I’m part of a family. I’m part of a workplace.’”

How to Get Kids to do Chores

If doing chores is so vital to kids’ personal and professional development, the question is how should you go about making them do it?

Experts agree that it’s better to create a chore system than to assign chores on an as-needed basis. Jim Fay, author of the bestselling book Parenting with Love and Logic, says that you should “create a list of every job it takes to keep a family going.” Clinical Psychologist Dr. Tom Brunner agrees that this list should include everything that needs to be done, “from garbage to yard duties to getting the mail.”

Dr. Brunner says that one of the main advantages of having a list is that you won’t need to remind your kids what to do. It teaches them accountability that they have “to go to the chore list and get things done on their own.”

Once you’ve created a chore list, call a family meeting to decide who does what. When assigning chores, make sure that they’re distributed fairly and that your kids have a say.

Dr. Nicholas Long, founder of the Center for Effective Parenting, says that the chores assigned to your kids should benefit the family as a whole rather than their simply their own well-being. This will help your kids understand that doing chores is about supporting the greater good, not just themselves. For example, it’s better to have them dust the living room or the den than their own bedrooms.

Explain to your kids precisely how they’re supposed to do their chores. It might sound unnecessary, but kids need to be told, as Dr. Anderson says, “what it takes to do it and how to tell it’s done.” Here, most parents are lacking. According to Dr. Long, “parents don’t spend enough time on being specific about what exactly the chore entails and even demonstrating how to do it and how to do it properly.” 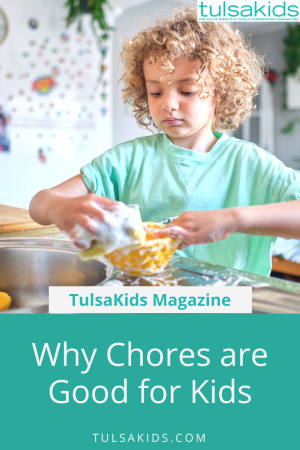