Where Does TPS Find $20 Million?

The district wants to hear from you 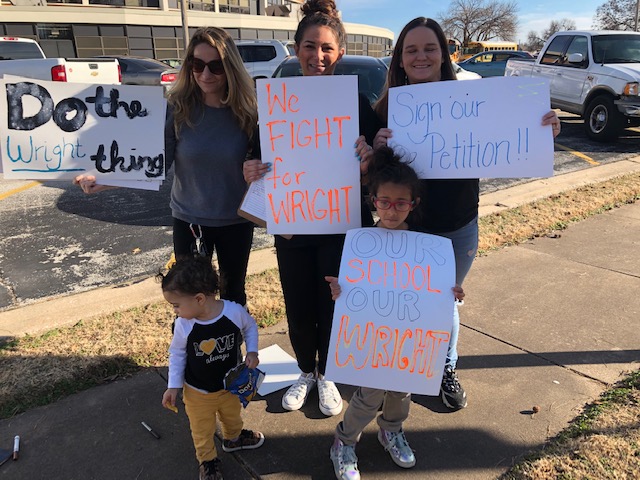 Facing a $20 million shortfall, the TPS administration invited the community to provide feedback on priorities. What to cut. What not to cut. You can find information on the process and the outcome at the Tulsa Public Schools website at www.tulsaschools.org. The top five priorities resulting from the community survey included the following: teacher compensation, class size, support staff compensation, social-emotional learning and supports and early childhood education.

None of the feedback to save money included closing schools; however, Superintendent Gist has announced the possibility of closing Grimes, Wright, Mark Twain and Jones Elementary schools to save two or three million. Gist is recommending that Memorial Junior High, Central Junior High and Rogers Junior High become 6th– 8th grade middle schools next year, and that Mark Twain be consolidated with Wayman Tisdale Fine Arts Academy. The recommendations will be made to the school board in January.

What is the real cost of closing schools? Closing schools will most certainly increase class sizes as well as disrupt children and families, which is certainly not good from a social-emotional learning standpoint. Check off two “top priorities” from the public that Superintendent Gist is ignoring.

Wright has a program for deaf students. I talked with some parents who were protesting the closing last week. Some of them have children who are deaf, but they also have hearing children in the school. They are afraid that their children, who depend on one another, may be separated if Wright closes. One mom grew up in the neighborhood, and her mother volunteered at the school for 15 years. She said the building is nice and she fears that it will be given to Collegiate Hall Academy, a charter school which currently shares space with Marshall Elementary. She wants her child to continue at Wright, not a charter school. She pointed out that Marshall has two gyms and a swimming pool currently not being used that could be put to use by public school students. Why not close Collegiate Hall Academy and put those students in Wright and Marshall? Closing a small charter school without a building would be much less disruptive. Why close the neighborhood public school?

Why is it that when public schools are starved, and resources are stretched to the breaking point, that TPS is supporting a parallel school system of charters that drain more resources from the public schools? Making decisions about where and what to cut is difficult, but maybe there’s a different, more fair and creative way to save money and keep schools open. The savings in closing schools is a drop in the bucket, but once the school is closed, it’s very difficult to go backward. Didn’t the superintendent say she was going to try to draw families back to TPS? Where will those returning families put their children? If Wright becomes a Collegiate Hall Academy, the families who wish to remain at a neighborhood school will have only one “choice” of a charter school. And what about the children who need special services because they’re deaf? What school will they attend? Eliot? Patrick Henry? Marshall?

I’m glad that Superintendent Gist has vowed to interview all the families leaving TPS. But, it seems a little late to wonder why people are leaving as they walk out the door. Why not work to create public schools that families love right now? Where’s the vision for that? Where’s the vision for keeping them in their neighborhood schools? If I had a child at one of the schools targeted to close, or one of the schools that will be taking on a large number of new students, I might be putting my house on the market right now.

Maybe it’s time to look at the “reforms” being implemented by the superintendent, and prior to that, Dr. Ballard’s acceptance of Gate’s Foundation money (MAP testing), and admit that those changes aren’t working for our kids, and families are leaving as a result.

Do we have a school funding problem in Oklahoma? Absolutely. According to a report by the Center on Budget and Policy Priorities, even with last year’s 19 percent increase in formula funding per student, Oklahoma’s per-student funding is still 15 percent below 2008 levels. Oklahoma schools continue to struggle with limited resources, low teacher pay and large class sizes. But it isn’t just funding.

If you would like to learn more, the first of four community meetings addressing the results of the community input on the $20 million deficit was held last night at McLain High School. The remaining public meeting dates and times are:

Next week, meetings will be held to explain what will happen if the board votes to close the four elementary schools, and to gather input from families who will be impacted. Let your voice be heard. 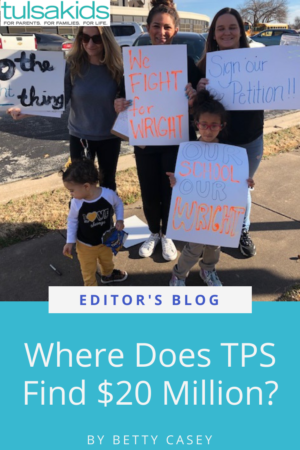 TPS responded to the blog above with the following comments:

“I wanted to make note of a correction to your story – We shared feedback from our community meetings and survey that showed where people wanted to see reductions – this included building utilization and closing schools. The first phase of that community engagement effort included 24 meetings where we engaged with nearly 1,500 Tulsans. We also launched a web-based survey and heard from 5,700 Tulsans about the programs, services, and supports that matter most to them. You can view data from these meetings and survey here.

I broke down the information to help make it easier. This is what the community told us they wanted to reduce:

Ensure that district facilities and operational expenses are being put to best use based on building capacity, conditions, and programmatic needs. This could potentially include consolidation or closing underutilized school space.

Make changes to ensure the best use of buildings and operational costs: This one is about how we use our spaces responsibility in terms of operational costs, current use, capacity, and programming. For example – we have district office staff at 9 different sites across the city, we have different transportation hubs, and in total, we have close to 100 different sites across the city that are part of Tulsa Public Schools. Each one of those sites carries staffing and operational costs, and we must consider how we are using our spaces in a way that maximizes resources and staffing.

Does this mean that the district could close schools? At this point, nothing is off the table with the exception of our moratorium on closing or consolidating schools in North Tulsa. This was a commitment we made as part of our work with the North Tulsa Community Education Task Force over the 2018-2019 school year.

It is important to note that while school closures or consolidations could be one of the potential ways to reallocate resources, no reasonable amount of closures would be enough to fill the budget gap. We will need to do a little bit of everything to get us to $20 million in expenses reductions.”