It started small – these little signs of jealousy between the kids after an evening spent with the grandparents.

It’s something Heather (named changed for privacy), a mom of two and stepmom of one, brushed off in the beginning. But as the kids grew older, and more vocal, she knew she needed to take it seriously.

Her 9-year-old stepson complained about going to his step-grandmother’s house, saying he wasn’t treated the same as his siblings. Heather said she had a suspicion he was right, but the choices of either giving up nights out with her husband while her mom watched the kids or confronting her mom about the perceived slight by her stepson both sounded like bad options.

In Heather’s case, working up the courage to have a conversation with her mom about how she was treating the kids was worth it. Her mom, who had always been a caring and attentive grandmother to Heather’s children, was unaware of how she was making her step-grandson feel. She was open to listening and open to making changes to make her step-grandson feel more comfortable coming to her house.

Family therapist Claudia Arthrell, grandmother of four, said she sees her primary role as a grandparent as a helper to the parents.

“If you don’t see yourself as a witness and support, you’re missing a huge gift in your life,” Arthrell said.

Grandparents who come into the relationship with their own ideas about how the children should be raised and how family life should be managed are setting themselves up for division in the family.

As a therapist and social worker, Arthrell is highly attuned to the grandparent-parent-child relationship, but she knows this doesn’t come as easily for some. In the case of family tension with grandparents, Arthrell recommends one or two sessions with a therapist.

“I cannot tell you the love I have been a witness to, watching parents and grandparents work together for the best of the children,” she said. “It’s not a mental health issue, it’s not diagnosable. But for me, it’s the essence of family therapy.”

“The parent can let the grandparents know, ‘These are the things you did for me that were wonderful,’” she said.

Arthrell cautions grandparents to listen to what their adult children are telling them about any fractures or problems in the relationship or family dynamic. To put it bluntly, Arthrell said: “As a grandparent, even if you disagree, that’s irrelevant.”

Arthrell compares the role of grandparenting to having friendships. Adults have friends who have different styles, personalities and ways of being in the world, and they know how to bring their best selves to each one of those friends. It’s the same with grandparenting. Grandparents can keep it front of mind that each child is unique, and that grandparents can bring their best selves to each grandchild, considering the needs and temperament of each child.

In Heather’s case, her stepson didn’t feel as known by his step-grandmother. He noticed there weren’t as many photographs of him framed and placed around the house as there were of his siblings. That’s a tangible thing the grandmother was able to correct. He also didn’t feel part of so many of the old family stories his step-grandmother told. That was something his grandmother could work on, making him feel he was just as much a part of the family, and that he would now become part of those family stories in generations to come.

Whenever a child becomes part of a new family, Arthrell says grandparents should let that child be the teacher. Arthrell says to welcome the child to call the grandparent by his or her pet name. In her case, her grandchildren call her CC.

She recommends not giving a grandchild new to the family too much responsibility. And, importantly, she says to expect the child will test you, whether that be by bending the house rules or testing your patience.

“And I’m not going to ascribe meaning to those tests or take it personally,” she said.

Also helpful, she said, would be to talk to someone really close to the child to find out likes and dislikes or other information.

Though Arthrell’s generous form of grandparenting has created deep bonds and love between her and her grandchildren, that doesn’t mean they don’t hit the occasional road bump. She says it’s good for grandparents to have house rules and expectations both to keep the grandparents sane and to keep the kids safe.

“I come from a generation where we feared our parents. I don’t want my grandchildren to fear me, but I do want them to hear me,” she said.

So, for her that means they need to remember one of the house rules, which is no screaming. If the kids need to yell, they can do so outside. And if things get too noisy, Arthrell may step outside for a bit.

Setting house rules allows grandparents to make divisions that may pop up more house-centered than person-centered. These aren’t people rules, Arthrell says, but rather the rules of the house. This is another way to lessen the likelihood that a child feels singled out for behaviors. Making house rules that apply to all the grandchildren makes things fair. The problem then becomes about the noise, for instance, and not the child making the noise.

For Heather and her stepson, she says there’s still room for repair and improvement. But her stepson noticed there were new framed photographs of him in the living room the last time they visited his step-grandmother. It was a small change that put a big smile on his face.

Natalie Mikles is a local freelance writer and mom of three. 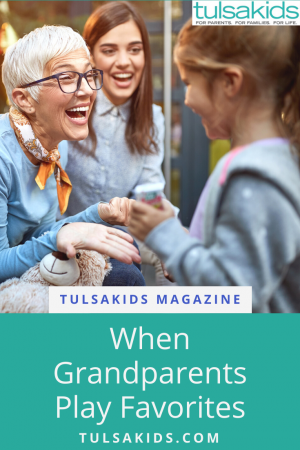