Sleep, to the parents of a newborn, is about as common as unicorns. Actually, chances are, parents are more likely to have seen a unicorn during their delirious fumblings to find a bottle at 3 a.m. than to have actually caught any real Z’s. I must say, as much as I miss my children being tiny babies, I do not miss the “up-all-nights” that went with it. But just when I think I’m out of the woods, I’m pulled right back in with just one word: nightmares. Nightmares are a common occurrence in childhood. The American Academy of Pediatrics (AAP) defines nightmares as frightening dreams that may awaken a sleeping child, not to be confused with night terrors which consist of a screaming, crying sleep-like state where the child appears awake but isn’t and doesn’t remember the episode later.

Thankfully, so far, my kids have only suffered from the occasional frightful dream, which their pediatrician agrees is very normal at any age starting as young as age 2. It is a little difficult to imagine what 2-year-olds could possibly have a nightmare about. But, the reality is that nightmares are very real to toddlers and young children, mostly because they have a harder time distinguishing between a dream and real-life. However, the majority of nightmares happen between the ages of 3-6 because this is the age at which normal fears develop and a child’s imagination is very active. Some studies estimate that as many as 50 percent of children in this age group have nightmares.

Exactly why nightmares occur is a mystery. But doctors do recognize some triggers: Being too tired, not getting enough sleep, having an irregular routine for sleep, and having stress or anxiety may all increase the risk of having nightmares. These dreadful dreams can also be related to the child’s stage of development or as part of coping with life changes such as starting school, moving to a new neighborhood, or living through a family divorce or remarriage. Research has also found that genetic factors can lead to nightmares. Nearly seven percent of children who have nightmares have a sibling or parent with a history of nightmares too. And, not surprisingly, nightmares can also occur after a trauma.

According to the Cleveland Clinic, there are several ways you can help reduce your child’s likelihood of having nightmares. Among them:

Ensure adequate sleep. Is your child getting enough sleep and maintaining his or her regular bedtime schedule and routine? Doing so will likely cut down on the number and intensity of nightmares.

Keep the bedtime routine ‘light,’ happy, and fun. In the 30 to 60 minutes before bedtime, don’t expose your child to scary movies, TV shows, frightening bedtime stories, scary music or other stimuli that may be upsetting to your child.

Discuss the nightmare during the day. Try to determine if there might be a theme to the nightmares – especially if they are occurring frequently. Identify what the stressors in your child’s life might be. Talk about these stressors and work with your child to reduce them.

Most importantly, go to your children when they cry out. Physical reassurance is important, so hold them or rub their back until they calm down. You can also get their favorite stuffed animal or toy and double-check that the night-light is on. One tip I recently received from an experienced parent was using air freshener as monster repellant. If her child wakes up with a nightmare, she sprays the room with the “repellant” and as long as she can smell it, the monsters stay away. She swears it’s worked miracles.

Other tips include a peaceful bedtime routine like a warm bath, upbeat story and happy song before bedtime. But if your child suffers from persistent bad dreams, it may be time for a trip to the doctor. Nightmares might signal that there’s something going on in their waking life that needs to be addressed.

Sleep is a vital part of maintaining good physical and mental health for children and parents. And, while everyone experiences the occasional nightmare, working through it is key. After all, a healthy happy family is the sweetest dream anyone could ask for. 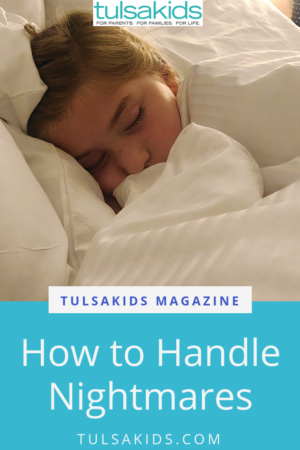