What to Do When Children Lie

All children tell lies sometimes. How should parents respond? There is not a simple answer to this question. Many factors need to be considered, including the type of lies being told and how frequently this behavior is occurring. As parents, we obviously want to discourage our children from lying. There are some actions we can take to encourage our children to be more truthful.

There are a variety of reasons that children lie. Some of the most common reasons include circumventing consequences and avoiding doing things they don’t want to do. Children sometimes lie in order to seek attention, while at other times they may be attempting to avoid it.

A child might come home with an exaggerated story about something that happened to her at school that day. This grandiose story might make it sound like she is the smartest, most beautiful, or most athletic at school. When children tell these types of lies, it may be an indicator of low self-esteem. Children who suffer from anxiety or depression may claim they are doing fine in order to escape unwanted attention. In both cases, parents may want to involve a children’s therapist.

The attention-seeking lies might be best addressed by not giving them much attention. If the child doesn’t receive the desired response, there isn’t much incentive for him to continue. If this doesn’t correct the problem, a parent may try gently confronting the behavior. There are two important things to keep in mind. First, do not label your child as a liar. This is harmful to the child’s perception of himself. Separate this unwanted behavior from the child as a person. Second, offer opportunities for the child to correct his story.

There is also a developmental component to lying. When children begin telling lies, they may just be experimenting with a new behavior. This can happen when the child is around 3 or 4 years old. Sometimes an older child, who has been mostly honest in the past, will begin lying. They may be testing this new behavior to see how it may benefit them. Will they get caught? Will they be able to avoid chores, gain attention, or get something they want?

Children with ADHD (Attention Deficit Hyperactivity Disorder) frequently struggle with telling lies. One of the core characteristics of ADHD is impulsivity. These children will often speak before they think. They may tell a lie before considering the consequences of their actions. It’s especially important to give children with ADHD the opportunity to correct their stories.

Talking to Children About Lying

When my sons were young, we spent a lot of time reading books. They were familiar with “The Boy Who Cried Wolf.” This led to discussions about how they wanted to be believed and trusted. I also shared a personal story of my own with them. It involved a time in elementary school when I was unfairly accused of something by teachers and the principal. I hadn’t done it. My family believed me because I didn’t have a pattern of lying. I was truly innocent, and it felt wonderful to be believed at home. You might want to think of similar personal stories you can share with your children.

Another way to encourage truthfulness is to allow for a second chance. When you believe your child has lied to you, you may want to discuss the importance of honesty. Tell your child you will leave the room for 10 or 15 minutes to give the child a chance to think about things and correct their story. If they do, be sure to praise their honesty.

We actually teach children to tell “white lies” in order to avoid hurting the feelings of others. For example, we would not want our child to tell his grandmother how much he doesn’t like visiting her home. This would only hurt Grandma’s feelings. We would discourage this form of truth telling as we teach social skills. This can complicate things as we teach our children to be truthful.

When parents are inevitably confronted with this behavior from their children, it is important to consider the situation carefully. Has the lying become pervasive? Does there seem to be a pattern in the type of lies being told? What does that pattern tell you?

Parents want to encourage their children to be honest and trustworthy. Remember that lying is part of growing up, and all children will experiment with it. Be careful not to label children as liars. This is a bad behavior you want to help your child correct, but it does not mean your child is a bad person. 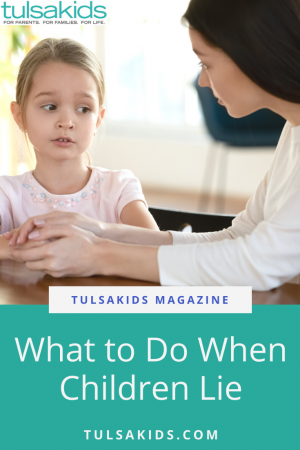